by Roderick Allmanson at precisely 23:56
It's time now to chat about one of the best films of the year, the enigmatic original (sort of) Sci Fi Opus from Writer and Director Rian Johnson, Looper (2012). Looper tells the classic story of a transtemporal assassin who is faced with the challenge of killing a future version of himself. Hijinx ensue, as do Spoilers from here on out.

There are a lot of great parts to this thing. It simultaneously rides on its Bruce Willis get and cements the action chops of Joseph Gordon-Levitt a bit better than Premium Rush (2012). Bruce is classic Willis here, gruffly battling through anything that gets in his way, including small children. It's not like he's without a sentimental side, though, but as he's forced to compromise more and more he slowly becomes the film's villain. The shifting morality of this flick could be the source of an entire post in itself. Hrmm -- why not do that now? 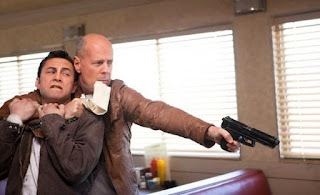 We start with JGL (are people using that abbreviation yet?) giving us a bit of narrative explaining the whole deal in a decidedly noir kind-of-way. His face is covered in make-up to make him look more like a Young Bruce, which would be seamless if not for how used to JGL's normal face we are by this point in 2012. The voice and attitude, though, are all JGL and the kid again deserves credit for carrying a film like this. Imagine having this conversation in 1996 about the wiener kid from 3rd Rock from the Sun playing a younger version of Die Hard. Everywhere, minds are blown.

The film is reverent more to Bruce than anyone else. He knocks out his younger self with a single punch, and not even a very hard one at that, which is part of the some of the sly humour sprinkled throughout this picture. He's virtually invincible throughout the whole film, and the only way he's stopped at the end is from Young Joe killing himself, therefore killing All Joes. That's really the only way Bruce Willis should ever die in movies, he's just far too much of a badass any other way.

So we're in 2044 Kansas. Yep, apparently in the next thirty years some city in Kansas (Is it Topeka? Lawrence? Kansas City, which is much more likely? Go Royals) becomes one of the five largest and most powerful cities in the country. More on that later. JGL plays a young version of Joe very reasonably. Despite the drug use and um...killing people, he's got just enough of a good heart to really rally with him. As he gives up his best friend for a stack of silver (It'd be Judas-like if only Seth [Paul Dano] was anything close to resembling a Christ figure. He's not) we realize how much of a piece of shit he is. The thing is, though, so does Joe. This is also when he's at his most delusional with the prostitute he has convinced himself is his girlfriend. 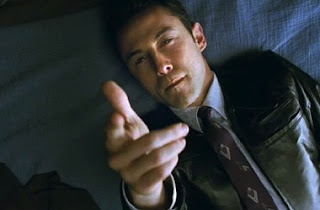 Really, Joe, when you offer the hooker half your stash of silver and she turns you down because she likes the life she has now better, what does that say about you? He's basically a piece of shit assassin at this point. Enter Old Joe, played by Bruce, who through a lifetime of addiction and redemption has finally found some peace in the world, only to have it destroyed by the mob bosses of the future (I will get to the time travel aspects later, for now, the characters are more important). Thus, at this point Old Joe is the righteous force for good, traveling back to kill an evil Telepathic Future Hitler and Young Joe is the selfish prick.

This eventually flips as Old Joe becomes more desperate to protect his own future (past) life and starts blasting little kids in the face who he believes to be this Hitler-figure. Still, The Rainmaker, as he's called, may not really be a bad dude. For all we know he's just running the crime and getting rid of all the old hitmen and vagrants. Either way, he's pissed off Bruce Willis, and that's no good. Old Joe loses sight of anything beyond his mission while Young Joe actually begins to form actually meaningful connections beyond his own bubble.

By the film's end, Young Joe is willing to risk another path - changing Hitler's history to make him a good dude instead of simply killing him. It's an insightful way of thinking he acquired by actually talking with the boy and understanding his situation rather than just showing up and painting the cane field with his brains. Which Joe is the hero and which is the villain shift constantly in this film which elevates the product beyond any kind of simplistic narrative. And we haven't even begun talking about time travel yet.

There are many other characters who fill this thing out. Emily Blunt is awesome as Young Joe's squeeze, although her horny Froggy Booty Call is kind of bizarre, if not appreciated. Her love and dedication to a Child Hitler is the core of the emotional turns of this film and her simultaneous relationship with versions of Joe that either want to kill her or save her is the most important aspect of everyone's relationship dynamic. The aforementioned Paul Dano is an even dumber, more outlandish version of Joe, and his story largely sets up the high stakes Joe has if he fails to close his loop. There's also that dude from Raising Hope. 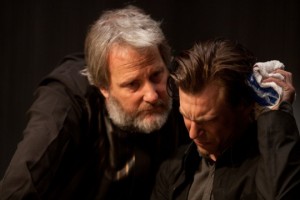 We've also got Jeff Daniels as an excellent laid back yet ruthless Mob Boss, Abe, sent back in time from the Future, along with Noah Segan as his dopey lead muscle, Kid Blue. I have personal theories that Blue is either Jeff's son or a past version of himself based on their close emotional relationship. Blue is constantly obsessed with pleasing Abe while Abe tends to ignore him for Joe, inciting tremendous jealousy in him. He also gets extremely emotional at Abe's eventual death. Abe acted like a father to all of the Loopers, including Joe, but Blue's focus around Abe and fear of disappointing him lends me to think there's something else going on between those two.

Lastly we have one of the all-time Creepy Psychic kids from young man Pierce Gagnon. The little dude does great here, playing a genius, stubborn kid who is quick to anger as well as penitence. He acts exactly as he should - a little boy who can't control the great powers he was born with. It's tough to learn how to handle that kind of responsibility (especially if no new Spider-Man movies are released in the 2040s) and he plays the classic version of a kid spilling milk during a temper tantrum and then crying to his mama because he knows he was bad. Except you know, in this version, the house explodes.

There is certainly more to come from this flick, I'll be talking about the politics and general coolness coming soon!