by Roderick Allmanson at precisely 13:04
This was all too easy. What was really wild is how we got here, though. T'Challa, King of Wakanda, the Black Panther himself defeated uhh....Sonic the Hedgehog. What are you people doing. 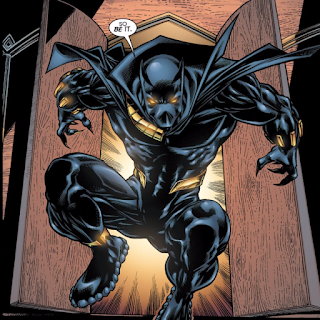 Here's the final poll, which Black Panther won with 83% of the votes.

And his path to victory:

Peter Taggart and Mulan were wacky fan favourites, Black Panther's victory here is pretty significant. It also helps that he couldn't be hotter off one of the biggest blockbusters of the year. Also of all time. But let's also look at Sonic's path at a 9 seed:

Sonic beat two #1 seeds! But other than that a lot of his opponents were pretty obscure. That Round Two defeat of Goku is UMBC-esque, though.

So, Black Panther as a champion #2 seed joins the ranks of March Badassness Champions. Eventually we'll do 64 of these and have them all fight each other. That would be in the year 2078. Man I hope I'm still alive doing this crap in 2078. Here's your all-time Winner Rundown:

I kind of do want to point out that only one straight white male has won in four years. Diversity is badass, baby!

As we do look to the future, I've got to say that we scraped the damn barrel pretty hard this year. I have currently amassed 87 more pop culture icons to duke it out, which I'll whittle down to 64 for next year, but it's going to be ROUGH. I can't imagine anyone coming in who has never seen this site before and thinking, "Why is Atom Ant a #3 seed?" That's how it works. If you've got any ideas of who you'd like to see, please...please send them in.

I also think I might move this to Twitter next year. Maybe even dust off the old twitter handle. I have...I have four followers and have not tweeted in seven years. I see no issue with this.