Was Star Wars: The Clone Wars a Satire?

by Roderick Allmanson at precisely 22:18

Good evening, folks! Are you watching the Super Bowl right now? I've gotten so angry at Tom Brady that I'm instead diving into a topic that has been on mind for literally days. Despite my long history with Star Wars, I have had a significant gap in my knowledge in that I have never gotten into The Clone Wars animated series. Oh, I watched all of Genndy Tartakovsky's Clone Wars back in the day, but I never quite dipped into Dave Filoni's work.

In what I'm sure is perfectly targeted corporate synergy, my mind was changed after watching The Mandalorian on Disney+. There are a handful of characters and events that directly reference The Clone Wars, and obviously with the series conveniently located on the same streaming platform, I decided to check it out. I have always heard good things about the show, but had been turned off for years mostly for two big reasons:

First, the Clone Wars movie from 2008 was terrible. All of it felt like the death knell for Star Wars - instead of an epic, only nine-times in a lifetime event, it just seemed like a glorified made for TV movie. It just wasn't a very high quality experience. I may have just been aging out of it, as well. By this point I was 22 years old, and this movie was clearly made for children. I don't know, I was watching a lot of Ben 10, Generator Rex, and Total Drama Island in this era. Shit, also a lot of Flapjack and Adventure Time. Okay, I have no excuse because I was watching a lot of children's shows. Or maybe that is enough of an indictment - I watched all this crap around the turn of the decade and The Clone Wars STILL felt like a children's show to me.

Second, the very idea seemed flawed. Not only did it seem superfluous since the movies released years prior showed us both the beginning and end of the Clone Wars, seemingly robbing the show of its narrative potential, but the entire in-universe point of the war seemed to give the show cringey connotations. This was a show designed to market Clonetrooper toys and cheer on their exploits - how was that possible when we knew that in the end they would be programmed to execute Order 66 and slaughter all the Jedi? It always felt very naive to center a show about these armies, when the entire point was that these were Clones vs. Droids in the biggest fake-out war of all time. Again, it seemed to rob the story of any weight. 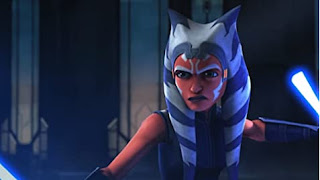 But, Mandalorian, so I watched a few episodes. I specifically checked out the episodes centered around Mandalore. These spread out over both early and later seasons, and culminated in the final couple stories that tied in directly to the events of Revenge of the Sith (2005). There is a marked difference between the first few season and their later efforts.

The early episodes are nigh unwatchable for all the reasons I feared. Characters blatantly lay out their emotions, lack coherent motivation, and it feels generally designed to pander to a more child-like audience. It falls very heavily on the side of cheering on the Clonetroopers, which while that is technically cheering the Republic and perseverance of democracy, we also know that Sidious is behind everything. They present no qualms with this juxtaposition and play it straight. Clonetroopers are heroes, saving the day!

As the series progresses, though, the possible satire becomes more evident. The way I have always interpreted Star Wars is that Anakin is basically right in Revenge of the Sith. The Jedi have become corrupt and too involved in Galactic politics. They are so far removed from the order of peaceful monks established in the Original Trilogy. This is all over the films. Instead of a peaceful hermit, Yoda is a huge power player, spinning lightsabres and pushing agendas. Instead of being one with nature, the Force is commodified, quantified, and analyzed through midichlorians. This seems purposeful - the institution had to be destroyed in order to be rebuilt. The Prequels seem to demonstrate this intelligently but always muddled their message by framing the corrupted Jedi as the ostensible heroes in the story. Their actions are glorified in a pretty straight way, not in say, a Starship Troopers (1997) way. It makes me think that George Lucas genuinely had something interesting to say about how powerful institutions lose their way and become corrupted but he also really wanted to sell a lot of toys and not stray all thaaaat far from a successful blockbuster hero formula.

It makes a lot of sense - why were the Jedis generals? This doesn't vibe at all with the peaceful hermits in the original trilogy. The Clone Wars finally actually hones in on this, mainly through Ahsoka. She's really a brilliant character that they can use to point out the Jedi's hypocrisy - she's not a main character from the movies that would require some heavy explaining, or more importantly, would actively be criticising the Galactic institution they are working for. Anakin is an admittedly weird example, but his fall does have a tremendous amount to do with the realization that the Jedi are not serving their original purpose. Sure, the reaction probably shouldn't be to kill all the younglings, but he's still right.

The Clone Wars begins to hone in on this, especially in the last few episodes. The cracks in the war start to show, though the unlikely sources of Darth Maul, Ahsoka, and a Clonetrooper Commander named Rex whose Order 66 brain chip Ahsoka disables. The thing is, though, it's not necessarily blatant. There is still room to take everything that happens straight. It really depends on your perception. There is a lot of hokey elements, though. The opening 1940s serial narration you could interpret as genuine or as over-the-top propaganda. Again, the ascension of Palpatine is obvious, it's the whole point. So that shadow looms over the entire series - which makes treating everything at face value feel very awkward.

There is also the simple fact that the CIS' reason for seceding from the Galactic Republic are never really explained well. Did they just...not want their corporations to be taxed? They really are Trade Federations, Intergalactic Banking Clans, and of course the Techno Union. It's really like they all just didn't want to be regulated so they went to war with the government. That sounds like such a farce, but the added layer is that no one really questions the reasons for war. Even the Jedi are like, "Whelp, time to fight droids I guess. Choppy choppy!" There is a lot of "Fighting to preserve Democracy!" which sounds insane coming from a series and films that premiered during the Bush years.

We also don't talk enough about how this war featured mass-produced droids fighting mass-produced clones. It just all feels like bullshit produced by higher powers who didn't want to get their hands dirty. This is built into the premise, of course, but where it gets weird is when they demonstrate these clones fighting with real valor and droids with real personalities. Is it truly postmodern? Or does it exist in a space where genuine emotion can exist despite its superfluous and hollow origins?

So, to level with everyone, this show is a money-making machine designed for children without much room for nuance. It's not a dirty, underground satire designed to upset the natural order. At the same time, though, it totally is. We don't give Lucas and Filoni enough credit for pulling this off - or maybe they deserve derision for sincerely bunging and muddying a clear message of parody. All the glory of war, patriotism, and celebration of heroics rings so false in this world, but you need a top-down view to understand that.

In the end, I'm torn of whether or not this was all on purpose. There is other supporting nonsense. Obi-Wan is a total dick and borderline fascist. Anakin is cocky, arrogant, and above it all. The show does a nice job of highlighting a lot of other weird side characters and shows their story, but it all feels very off.

So, I'm pretty torn on this - what do you think? Is The Clone Wars the most brilliant satire of both its own universe and war in general or is it just nonsense?