by Roderick Allmanson at precisely 08:43

One syllable that should elicit a tremendous range of responses. Charming, annoying, heroic, smelly, dynamite, poorly-groomed. Cage is simultaneously one of my all-time favourite and most-hated actors. He's got a handful of incredible performances and much much more extremely awful performances. As Roger Ebert says though, he's fearless. This is part of his edge. Always a superb actor even in terrible films. If acting truly is wholly becoming another character in another world, Cage legitimately like no other actor does become a whole other person for his roles, regardless if the worlds that character then inhabits are crummy and full of plot holes.

Anyway, in honour of both The Bad Lieutenant: Port of Call: New Orleans (2009) recent limited release (hate movies with titles this long by the way, looking at you The Assassination of Jesse James by the Coward Robert Ford 2007) and his recent bankruptcy, I thought I should take a moment and look at his intriguing career. I tend to separate his movies into two major categories with a few whatever films strewn in between (feel free to debate me). Thus we have the Sweet and the Shit: I haven't yet seen The Bad Lieutenant: Port of Call: New Orleans but it looks pretty damn good (here's the trailer), probably good enough to be considered a solid Caging. It's the kind of performance we get every few years out of the Cage just to remind us that he does actually know what he's doing sometimes. The last time he did us the favour was the spectacular yet sod upon by studios Lord of War (2005). Besides the phenomenal opening scene, Cage carries the film with just the right amount of dignity and crazy that not a lot of other actors could. His laughable charm also rings through with Matchstick Men (2003).

Going back in time, it's hard to remember that he's batting .500 at the Academy, winning one nomination, Leaving Las Vegas (1995) out of two, Adaptation (2002). Both of these really are great performances that in some way are very un-Cage like. He's not on his knees with smoke flairs or making inane jokes and chuckling to himself. He's shedding a part of his humanity and you instantly lose the Cage Shield and become one with the Cage. Breathtaking.

The final performance I'll group into the Sweet Section is Raising Arizona (1987), where we get to see a young demure Cage play with the common Coen theme of abandonment, miscommunication and misinterpretation. His swagger is perfect and the film was the early start of what was close to being this reliable, quasi-indie nuanced actor. Then Cage met Michael Bay. 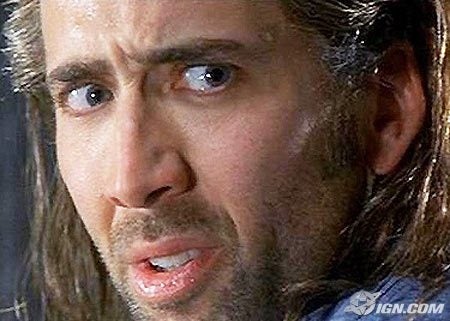 Cage needs praise for the sheer volume of work and substantive oeuvre he's come up with in his Shit Category. Now, by shit I generally mean any action film he's been in where the Cage Persona is played up. Basically the opposite of Adaptation (demonstrating decent range here), Cage is the calm yet quirky leader of some action gang or on his own against the world, often cracking wry jokes and oftentimes again hiding an inner insanity over an outward tranquility. I give you the following, of which I will discuss a couple in detail: The Rock (1996), Con Air (1997), Face/Off (1997), 8mm (1999), Gone in 60 Seconds (2000), National Treasures (2004 and 2007), Ghost Rider (2007), Next (2007), Bangkok Dangerous (2008), Knowing (2009). I know, I know. Impressive stuff. You'll notice how progressively bad his films have become lately, The Rock and Face/Off are arguably still great movies, there's hardly a soul alive that could make a good case for Bangkok Dangerous. It's also a well-established fact that most of his roles are solely dependent on his hairstyle, the worse his hair, the worse the movie (the exceptions of course being Raising Arizona and Adaptation where it fit his character). Anyway, I'm backtracking, let's talk about The Rock:

The Rock by and large remains Michael Bay's best film. Pending Transformers 3 wins the Academy Award (which I'm predicting it will), it shall remain his greatest opus. Cage is also incredible. He actually does only a little action ("It's not mine.") and its always pretty unwillingly, he'd rather be listening to Beatles albums with his hot Preggers wife in a lab somewhere. He's got that edge though and when his spine grows enough to stand up to Connery's general assholery, you root for him. Face/Off is probably the best example of hiding the inner insanity behind the calm veneer, the struggles Sean Archer makes pretending to be the man he despises, Castor Troy. It's brutal to watch the Cage channel his anguish over blowing coke with scumbags into the exhilaration Troy should be getting from the same act. Stunning.

The rest is just pretty goofy. The National Treasure movies are shit, Next and Bangkok Dangerous are basically B-Movies filled with A-List actors, 8mm and Gone in 60 Seconds tend to comply with that "extreme" fast car-obsession we had with action films of the early decade.

Lastly, we have the very special case of The Wicker Man (2006). The Wicker Man is hands down one of the most unintentionally hilarious movies of all time. No question. I live for clips of it on YouTube, the following is probably the funniest video on the whole internet, it works best without any kind of context at all.

Also note this and this. The woman's face during that bear suit punch is priceless. What a feast. Now, the original The Wicker Man (1973) starring Chris Lee is one of the greatest horror movies of all time. The Cage couldn't stand for this however and really delivers one of the most awkwardly intense performances of his career. Is it really any less enjoyable? Of course not. The Cage carries us through the hellish script unscathed and laughing all the way. Oh hum di do.

Cage really should get more respect that he deserves. Or maybe less respect to be honest after watching those Wicker Man clips. Either way his impressive career is certainly undervalued (hey, they're giving Roger Corman an Oscar for volume, why not Cage?) and will always have a place in my VHS player.

Now, with that said, I may not be able to post for some time now, a little break if you will as I am currently between computers, relying on Public Libraries to make these last few posts. I'm not sure they enjoy me blasting Cage Wicker Man scenes so I may be some time before I post again. Never fear dear readers, never fear, because the Cage will still be with you...always...and forever.