Community on Yahoo - When Should Good Shows Stay Dead?

by Roderick Allmanson at precisely 17:47
By this time if you're a fan of the show Community you ought to know that a deal was struck with Yahoo's fledgling streaming video service to revive the show after NBC's cancellation. Yahoo dropped two new episodes of Season 6 on Tuesday, and all things considered, they were pretty good. But how much should we milk a show that changes production houses to stay alive against improbable fan-fulfilling odds? 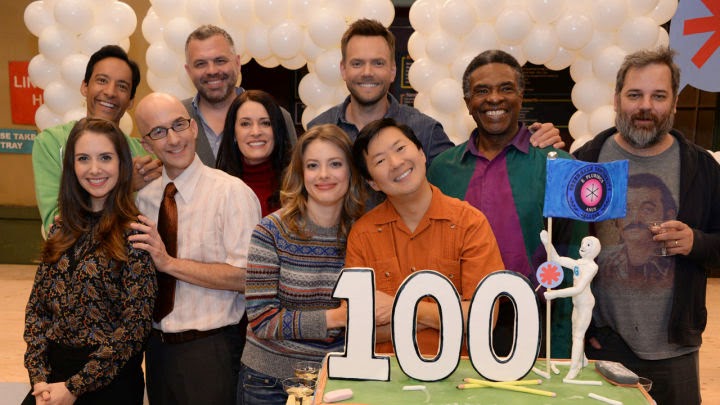 I suppose my only issue with this is a sort of Seinfeld-based theory. This show ought to have gone out at its peak, in Season 3, with the departure of creator and supposed wunderkind, Dan Harmon. Season 4 was a rough, forced year that didn't quite walk the fine line that made Community special. Season 5 saw the return of Harmon's fine touch, but always felt like it was forcing what once came to it so naturally. This was sort of due to the cast influx along with the specter of behind-the-scenes strife between both the show and its cast and the show and its network.

So, in many ways, escaping NBC, who, for the record, gave the show far more chances than it deserved - it wasn't lasting five years on any other network - for the realm of digital streaming seemed like a big win. It's kind of a hip thing to do these days, with Arrested Development returning (albeit the seven-year gap in that case is somewhat more significant), this time to Netflix. Plenty of other shows have jumped stations for a few more victory laps, from Futurama on Comedy Central to Cougar Town on TBS. All of this should be great, right?

What I'm getting at is that fans don't always know what they want. They want to replicate the feeling they had when that show was in its prime and refuse to understand that that feeling is gone forever once a show's prime has fallen and its creative minds have largely moved on to other projects. The interesting thing about Community is that, as Community should, it has dealt with these perceptions head on in a very meta-way.

Community has always used Abed as its semi-fourth wall breaking outlet to connect with the "show," something the rest of the cast refers to as their lives. This allows Community to comment on its place in the pop cultural landscape, play with tropes, and in some ways subvert the decline in quality that plagues other revitalized productions through its acknowledgment of its situation, a self-aware declaration that adds another layer of jokes to the proceedings.

Reliably, they have done this more obliquely when opening a season. But "Ladders" (S6;E1) notably addresses how much things have changed, how people in real life aren't quirky or interesting, and how it's more important to send emails than to start underground Miller's Crossing (1990)-inspired speakeasies. The show does a nice job of contrasting this sort of actual life heart with the absolute zaniness that's required to make a hilarious modern single-camera sitcom. The complete failure of this show in anyone else's hands but Dan Harmon is a testament that this whole thing requires a very delicate touch.

I'm a bit torn on what exactly to think of Season Six of Community. It's not like the episodes were bad, they were certainly as good as anything Season Five had to offer. If anything, it ought to help legitimize Yahoo as a streaming player (with ad sales taking over from subscription sales, which is almost a plus for the cash-minded media consumer) and its hybrid release model of two episodes a week for anytime streaming is an interesting way to push the flexibility of streaming services while maintaining the habits of traditional television viewing.

Community finds success as an adaptable show because of its inherent meta-nature. It can comment on things, reflect on things, and doesn't have to pretend it's replacing any characters or expressing internal feuds without tact or subtlety. It's actually free to morph and change independent of its cast or network. As long as Dan Harmon sticks around it ought to be fine. But part of me still thinks we're chasing down 2012 for this thing.