by Roderick Allmanson at precisely 21:13

We are knee deep into recapping time now, folks. Normally we churn out all sorts of fun things like actor, actress, hero, villain of the year, but as with everything, 2020 just feels so weird. Does this devolve into Bad Boys for Life (2020)? Or Wonder Woman 1984 (2020)? I'm not sure what scenes to even through on here - we really lacked all those big moments and superlatives that a normal year holds. Let's try this anyway - I think there are still some notables to discuss about what the hell happened this year...

Note, we're going to talk a lot of 2020 here - in the interest of avoiding repetition, every movie we talk about is a 2020 release unless otherwise stated!

Actor of the Year 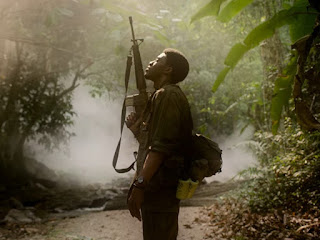 We have a few candidates to go through. There seemed to be moments this year where actors would shine. For instance, Pedro Pascal is currently in two huge parts of pop culture, The Mandalorian and Wonder Woman 1984. Sacha Baron Cohen was a focus back in the fall with Trial of the Chicago 7 and Borat: Subsequent Moviefilm emerging simultaneously. Pete Davidson in addition to steady SNL work had two movies of somewhat acclaim, Big Time Adolescence and King of Staten Island, but neither really made a huge cultural impact. Tom Holland had an excellent role in a not that great movie, The Devil All the Time and then voice work in Dolittle and Onward. That's all good, and they had their moments, but it also just didn't quite feel like he was showcased.

No, we decided to give this year posthumously to Chadwick Boseman. His ghost literally haunts Da 5 Bloods, which was a big deal when it dropped and remains on many best of lists seven months later. His final film, Ma Rainey's Black Bottom is also stellar performance. He was able to make these two huge culturally important films spread out through the year, while still building on a big legacy from Black Panther (2018) and the final two Avengers films. He also passed away very shockingly after a long but discrete battle with cancer. It's still maybe the 2020 death that hits the hardest. It's his year.

Actress of the Year 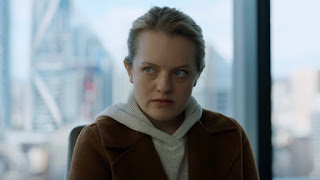 This was a tough one. There are many great candidates. Octavia Spencer had sort of the Tom Holland route, and we mean literally, she leant her voices to the same projects in addition to appearing in The Witches and the min-series Self-Made. Mackenzie Davis is surely on the rise, appearing in three films this year, but none of them were a huge cultural impact. The Turning, Irresistable, and Happiest Season, for the record. Aubrey Plaza is similar, sharing the screen in Happiest Season while adding the critical favourite, Black Bear.

We came down to two actresses - I lean towards Jessie Buckley because she is the most fascinating person to watch in two fascinating pieces of media, I'm Thinking of Ending Things and the anthology series, Fargo, and surely she will be cast in many more great roles after this year. Still, both of those pieces of media are very niche and she hasn't quite gotten the exposure that really warrants Actress of the Year. Therefore we need to give it to Elisabeth Moss, whose turn in The Invisible Man was fantastic, and thankfully, something that may have been overshadowed in a fuller year gets to shine. We really don't appreciate horror actresses enough. Ask Toni Collette! Moss added Shirley to that and the year is complete.

Scene of the Year

There is quite simply a lot I did not get to see this year that should be contenders, like the tracking shot from Vast of Night or the singalong Paris Hilton scene in Promising Young Woman. This might require a revision at some point. There's some good stuff, though. The end concert in Bill & Ted Face the Music, the final song in Eurovision, Giuliani in Borat. I think I'm going to go with the final scene in Trial of the Chicago 7, though, when Eddie Redmayne reads the names of everyone killed in Vietnam. In a movie filled with amazing things that actually happened, this actually didn't happen, but it's still a powerful capper to a powerful film.

We've mentioned a handful, I might give it to Bill & Ted. Is it really bad that my favourite tie-in song is "Speed Me Up" from Sonic the Hedgehog? I literally put this on my playlist. I don't care about your judgment. That was an incredibly fun movie. Sonic is totally the hero of the year.

It was definitely a weird one. But I don't think we can totally dismiss the entire year. There was a lot of good that came out that we can't even get into. We just need to dig a little deeper. We have Riz Ahmed in Sound of Metal, every scene containing a new revelation from Bad Education, and our best hero may be Tom Holland from Onward. Villain is the eponymous Invisible Man, right? Or maybe just men in general? Or racism? Rudy Giuliani?

Something is certainly missing this year, which should be obvious to everyone. We simultaneously had wider distribution than ever before thanks to a plethora of streaming services that greatly increase wide access to films. That's great! But it's also a cautious time. Studios aren't very psyched to roll these dice. The immediate result is that the films released, despite being more available, were also more niche. We lack a shared culture in 2020 beyond Bad Boys for Life and Sonic. The implications of all this don't amount to much right besides a bummer, a gap in our collective experience. We'll see what this all means on down the line.

Most importantly from a movie perspective, this virus has forced what had been coming for a long time - a complete shift in distribution methods. Studios are still hanging on to theater chains, and rightly so, but the future is in streaming. I personally love the theater, going out is still one of my most personal zen experiences I can have. But unfortunately the truth is on the wall at this point - we're shifting towards home entertainment. COVID-19 has made what should have been a long, slow, painful, yet manageable shift into a rapid destructive tornadophoon that has blown up the world, but the end result is the same. We will need to adapt.

2020 was an extremely pivotal year for our culture - we will see if we get any blockbusters beyond the burn-off that current studios need to get off their slate. But for real - would anyone have a problem with a return to fiscally responsible, character-driven mid-range action films and adult dramas? This could lead to some really great pieces of cinema for years to come. We'll see if anyone gets the lesson.

Labels: Best of 2020, Lists
Email ThisBlogThis!Share to TwitterShare to FacebookShare to Pinterest