by Roderick Allmanson at precisely 15:14

Okay people, here we go! Our official list for the GREATEST FILMS of the YEAR 2020 CE. This immutable list will be chiseled in stone for all eternity, never to be changed or altered in anyway. As is tradition, here is our revised 2019 list filled with movies we caught up on and saw last year. It's radically different. Here is the original list we had.

Godzilla: King of the Monsters
Booksmart
Us
The Dead Don't Die
Portrait of a Lady on Fire
Knives Out
1917
Uncut Gems
Midsommar
The Lighthouse

Now that we've gone through that, let's talk about the list of films that definitely won't change in a year's time. We limited this year to films we've actually seen - there has been so many possible weird indies that have slipped by us. I thought about faking it. I always fake it. Nah, not this year. 2020 is a year for genuine rankings! Nomadland will wait! 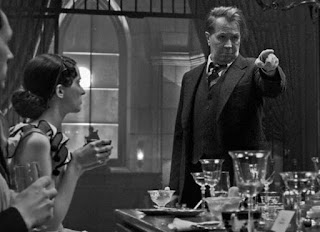 I was not super into Mank when I first saw it...and still aren't exactly excited about it, but there are some great bits here. Is it weird to think that David Fincher is too in love with his own father's script - it feels very personal almost to the point of inscrutability. It honestly has barely anything to do with the writing of Citizen Kane (1941), it feels more like an indictment of Depression-era politics, alcoholism, and its own private takedown of William Randolph Hearst. It's also noir without quite being noir and a character study without quite getting into the meat of the character. Still, the acting is all phenomenal. It's one of those films where Gary Oldman should get the long-deserved Oscar that he already got a few years ago. 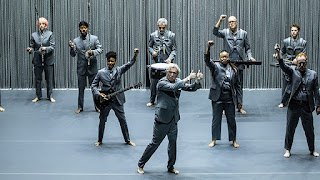 
I am not a huge fan of concert films, but this just so happens to be THE GREATEST CONCERT FILM OF ALL TIME. That may be slight hyperbole, but it's certainly fun. That distinction obviously goes to Dave Chappelle's Block Party (2006). Still, David Byrne finds a way to create an incredibly engaging experience by removing all barriers between the audience and the band members, giving each a distinctive personality and dance routine through the innovative use of wireless microphones and instruments. It all fuels Byrne's music that escalates between modern protest songs, classic rock, and unyielding positivity for a torn nation. The only thing holding it back is the fact that I'm not really into concert films at all. 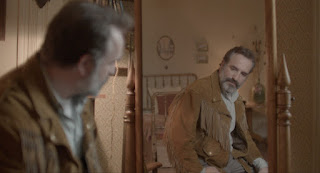 Hahaha. I don't know, folks. I put this on my anticipated films list last year and watched it pretty much because of that. It is an assuredly weird film, a little slow, quite incomprehensible, but if you roll with it, it can be rewarding. Sort of. Jean Dujardin hasn't done all too much since his breakout in America in The Artist (2011), which is getting to be a long time ago. He does an even better job here as a man obsessed with a deerskin jacket and their quest to eliminate every jacket in the world. Yes, that is the actual plot. It's amazing. It's such a subtle descent into complete madness. There is a logic to it, though, and again, if you can roll with it, it's a fun ride. Just don't through rocks at kids' heads. 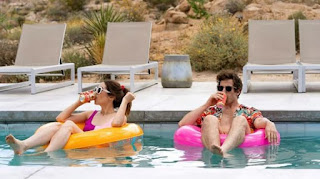 This was one of the most satisfying movies of the year, and possibly the funniest. There were some critics out there that called it a Groundhog Day (1993) rip-off, but time loops are its own genre at his point, from Triangle (2009) to the recent Happy Death Day movies. Anyway, Samberg shows previously unseen depth of acting and Cristin Milioti has a star-making role (if she wasn't one already. I don't know where she is). There's a nice twist where we enter when Samberg is far along into the loop, which is a perspective we don't get too often in these things. It counter-balances Milioti's experience and the character work as she progresses and pushes both of them out of the loop is nuanced while being immensely consequential. It's also genuinely funny. This was a great trip. 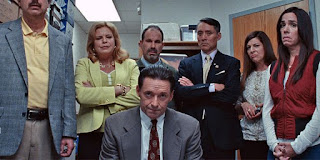 This was a little different - an HBO movie, but a movie is a movie, right? Especially this year. Hugh Jackman somehow finds a roll he's never had before, but still does a great job. It's nice to remember that he's an actor sometimes. Allison Janney is incredible, although she isn't quite in the film as much as advertised. Everyone else, from Ray Romano, to Geraldine Viswanathan puts in great work. The latter especially from here to Blockers (2018) has done great work as an up and coming actress. The corruption at the heart of this film is also insidious, contemporary, and constantly engaging. I didn't have huge expectations going in, but this is an extremely competent adult drama that is so rare these days. It was a great experience. 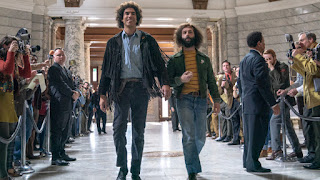 Speaking of adult dramas, there was perhaps no better than The Trial of the Chicago 7. We're dropped into the apex of 1960s counterculture, and what's striking most is the realization of how much of this dream has failed. It also highlights how many different viewpoints existed simultaneously, which still feels like a significant issue in uniting disparate sections of the political spectrum against the one true enemy - injustice! It has very true poetical vibes, racial vibes, judgmental vibes - I really enjoyed it. It's also a showcase for great acting, from the genuine hilarity and inspired casting of Sasha Baron Cohen playing Abbie Hoffman to the subtle notes of consistent character actor John Carroll Lynch and titans like Frank Langella and Michael Keaton showing up and doing their thing. Yahya Abdul-Mateen II continues to be the best part of anything he's in. And Mark Rylance! This was a lot of fun. 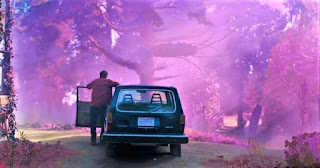 I'm surprised I haven't seen this on more lists. Maybe because it's completely bonkers insane eldritch horror that's nigh-incomprehensible, anchored by a Nic Cage performance suitably Nic Cage. But there's a lot of good stuff here - the uncontrollable inevitable horror that destroys every part of your life - the upended family unit, idyllic nature's shift, lost community members, the failure of authority. Why isn't this the definitive 2020 movie? It is a little reminiscent of Annihilation (2018), but it's more opaque, without ever being inaccessible. There's also this undercurrent of failed investments, the idea that this family had been doomed by poor judgment before the color ever descended. I typically judge films by how much they stick with me, and this one I kept thinking about for months and still will. 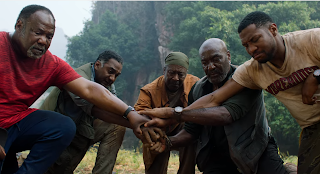 Spike Lee's second film on this list - who knew 2020 would be such a year for him to shine? I mean...actually were we surprised that one of our most distinctive and prolific Black filmmakers shines in a year filled with racial turmoil? Da 5 Bloods when I saw it was a shoe-in for one of the best films of the year and I'm actually surprised that it's fallen down a little bit for me. It's a monumental look at a very specific black experience but also finds a way to show how universal that experience is. It's a great achievement to weave threw these two narratives simultaneously 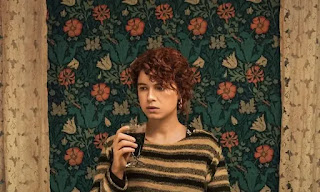 Yeah, this is a tough one. Going again with the films that stayed with me, this is one that had my headscratching for years. Or months or however long this year has taken. I've wanted to watch it again to pick up on all the details and nuance with the added benefit of knowing how it ends - it's actually remarkably straightforward when you know what's going on - it's that figuring out of what is going on that's the tough part. It is quite a marvel of film structure, I was continually checking the time stamp. Partly because it can come across as painfully boring, but you need to lean into the madness and realize that every scene has acute but significant purpose. I want to watch it again, but it's a tough emotional journey to go down. In essence, an incredible use of cinema that left a big impact on me.

I didn't think it would come to this, and I guarantee no one else picked Buffaloed this year, but in the end I just liked it more than anything else. It spoke to me more than any other movie. Part of that is assuredly my Western New York heritage, as well as my keen focus towards the current giant con of debt collection. It's ultimately a dark comedy about starting a small business, but it's flavor is so specific in ways that definitely won't speak to everyone, in fact I would suggest it would not speak to most people. I do think the accents are over the top, it's like The Departed (2006) for Western New York. It's an underrated accent that most movies should adopt. It's also consistently hilarious. Zoey Deutch gives a career-defining performance and Jai Courtney plays a delectable villain. Jai Courtney is underrated, I'm saying it - how many baffling crazy person roles does he have to take?

There were a few close calls this year. I really enjoyed The Platform and thought about it a lot, but ultimately it just wasn't there for me. Borat: Subsequent Moviefilm is a strong contender for the most 2020 movie every made, but it too just barely missed the mark for me. Finally, the following films are all great candidates that I just didn't get to this year. Will they change my mind a year from now? Super effin possible!

Have you seen any of these? Am I totally wrong? That is 2020 for you. Also, Sonic was unashamedly great, not even joking, I really loved it, folks.