Profiles: Misdirection, Miscommunication and Misinformation with the Coen Brothers

by Roderick Allmanson at precisely 01:39

In honour of the latest Coen Bros. film, A Serious Man (2009) released on DVD, Blu-Ray and VHS last week, today I'm taking a look at one of my favourite directorial teams, Joel and Ethan Coen. This also happens to be Norwegian Morning Wood's 100th post, so it will probably be special. Probably.

I recently took it upon myself to watch the entire Coen Bros. Film Canon. It is at times an exercise in the very weird, very violent, jarring, challenging as well as thought-provoking and ultimately entertaining. Throughout their body of work, though, there remain a few solid themes that are repeated over and over again. Namely what I tend to recognize most is how often characters in their stories have little to no idea what is actually going on around them. They make assumptions and decisions based not necessarily on lack of fact, but moreover on misinterpretation of fact or from some other belittling or deliberately misleading agent or factor. Some of this emulates life's natural sloppiness and provides a strong basis for realistic character choices and reactions. It is for this reason that the Coens are masters of character above many other directors. Some spoilers lie ahead, but mostly for films that are 25 years old. C'mon. Go see them already. 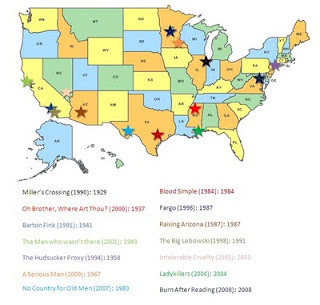 I've always wanted like, a map and timeline of all Coen Films. I couldn't find one so I very crudely made one myself. See - find the film at the bottom with the date it premiered in parentheses and then the date it's set after the colon, then match the colour to the star on the map for location. Wizard-like tasks, I know. Some disclaimers quick - The cities of Miller's Crossing (1990) and Blood Simple (1984) are never given, but it's established that Blood Simple takes place in Texas with some references to Houston and Corpus Christi, I tried to place it remotely between these two.


There were much less hints in Miller's Crossing, I placed in Chicago, which was most famous for its Gang activity in the late 1920s. Intolerable Cruelty (2003) takes place mainly in Los Angeles, with about a third in Las Vegas. I placed its star in Las Vegas for sheer diversity because L.A. was already home to Barton Fink (1991), whose first scene is in New York City and The Big Lebowski (1998). There's also the eponymous small scenes in Fargo (1996), as well as brief forays into Mexico in No Country for Old Men (2007) and Canada in A Serious Man (2009). Otherwise this map is accurate. Please call me out if you find it is not.


As far as the timing goes, the Coens are generally very forward about their dating, only Miller's Crossing and Oh Brother, Where art Thou? (2000) are real estimates. It's important to note their subtleties in conforming to their dates without knocking you over the head. I think of "That 90's Show" on The Simpsons (S19;E11) as an example of media deriving almost all of its plot and jokes from its nostalgia and forced anachronism. The Coens tend to be much more natural in their approach while retaining an attention to detail, the best examples of which are their slightly skewed Fargo and The Big Lebowski, both taking place only slightly removed from their release years.


Focusing in to the topic here, the confusion that permeates Coen films comes in two basic ways. The first are conspiracies, if you will, derived from higher powers to either plague the protagonist or suit some other devious end. This can come not only from human characters, but in more subtle, possibly other-worldly powers. This is most apparent in The Hudsucker Proxy (1994) in which Norville Barnes is duped by about everyone around him and propped up as a patsy for a company purposely trying to fail itself and in The Big Lebowski, in which no one really has any idea of what's going on at any given time (but often act like they do). In particular, The Big Lebowski becomes much easier for the viewer to understand if he or she starts to realise this simple fact: no one in the film is working for any one else, they do not care what happens to any one else, nor is their vested interest in the conclusion of any one else's story. Thus, the necessity to tie up loose plots becomes less compelling. The Big Lebowski was one of the first Coen films to really fuck around with its narrative structure, more on that later.

Barton Fink stands out as a movie with many possible interpretations. It seems as though the Hotel Earle and Charlie (John Goodman) (possibly a simultaneous entity) understand what's going on and are manipulating the other characters, but the ending is ambiguous enough to leave the viewer thinking. It is another film in which the main authority, the Hollywood Film Studio, does not understand its latest hire, Barton Fink (John Turturro), not does Barton understand his own idol, writer W. P. Mayhew (John Mahoney, damn a lot of Johns are in this movie) until they get to know each other. In all instances, all parties are disappointed because reality does not match up with the expectations they assumed of each other. This leads us to the second, greater element of Coen writing:


Misinterpretation of Facts on the Part of Protagonists:

In virtually every film this happens at some point. Let's start with Blood Simple, in which everyone assumes incidents and deaths happened incorrectly, leading to greater fear and preparation on their part, which is why Visser (M. Emmet Walsh) ends up laughing hysterically at the end when he is murdered by Abby (Frances McDormand) because she thought he was Marty (Dan Hedaya). Phew. And film one is in the can!

Miller's Crossing is full of similar assumptions and trickery, including Tom Reagan's (Gabriel Byrne) fake killing of Bernie Bernbaum (John Turturro), and some of the problems that causes. Oh Brother, Where art Thou? is full of mistaken identity, concerning race, secret society membership and even pop stardom - the latter leading to the best moment in the film, watch below:

The film's Governor characters are also interesting in that while the crankier one has the ability to look past race to votes (a true politician!) while the supposedly cheerful one turns out to be a KKK Grand Lizard Turkey Wizard, which kind of costs him the election.


A few of the Coen Bros. films rely almost solely on its entire cast of characters getting things wrong. The wildly out of control antics that follow the inciting incidents of Fargo and Burn After Reading (2008) are great examples of this. Fargo stands out in that Marge Gunderson (Frances McDormand - hey you ever notice a trend with their casting?) is actually pretty competent at figuring out the plodding mechanisms of the rest of the idiot cast. There is no such luck in Burn After Reading, however, which finds the only real resolution at the end when most of its characters are either killed or flee the country, which CIA Superior J.K. Simmons sums up to his cohort:

The film has layers and layers of betrayal, misinterpretation (memoirs, taxes or CIA secrets? Doesn't anyone LOOK at these things?!) and mistaken identity (poor Chad). It's not that much unlike The Man Who Wasn't There (2001) in which the plot is incited by Ed Crane's belief, based on intuition and not fact, that his wife is having an affair. What comes next includes beatings, murders, mistaken identity and mistaken arrests, all on faulty information. Also in a similar vein, The Ladykillers (2004) works mainly because even until the very end, Marva Munson (Irma Hall) has no idea what goatee'd Tom Hanks (one of about 14 Coen Allegories for Satan) was doing the whole time.

In the Coen's only Best Picture Oscar Winner so far, No Country for Old Men, they utilize the same techniques, but expound greatly on the narrative structure. The (SPOILER?!) off-screen death of Llewelyn Moss (Josh Brolin) was the most brilliant storytelling move I've seen in a very long time, essentially doing away with the need for the Obligatory Scene in favour of advancing its metanarrative and hardening its theme. Thus, the primary party decieved and abandoned is in fact, the audience. When Llewelyn dies, so does the audience's connection to any one in the story - this should be folly, but instead the Coens merely swap for Sheriff Bell (Tommy Lee Jones), who is as weary of the world as the audience should be after losing Llewelyn. Thus the viewer experience is symmetrical to the characters', leading to greater identification and a further emphasis on the themes of loneliness, isolation and the penetration of evil into the simplest of lives. THAT's why No Country is an Oscar winner!

Of course, I haven't yet mentioned the Coen Bros.' greatest misinterpreted film, the oft-overlooked Intolerable Cruelty. This movie is filled with people trying to trick and deceive other people, leading to completed character arcs, quick reversals, then quick changes back, twists upon twists based on how much information and scheming is revealed to any given character at any given time. As a film primarily about love, marriage, cheating and divorce, scandal, lying and treachery are at the forefront constantly. For the most complicated, "Coen-y" movie on this list that you may have skipped as a "chick flick" or something over the years, look no further than Intolerable Cruelty. It's got more deception than No Country, more awkward Clooney jokes than Oh Brother and Geoffrey Rush stabbed with an Emmy. Awesomeness at its full potential.
So, what about A Serious Man? It certainly falls in line with all of these themes. The first scene (which I am still trying to figure out what has to do with the rest of the film, according to the Coens, nothing) centers around the possible mistaken identity and then grave actions of a small Jewish home in the mid-1980s. After that, throughout the actual film, protagonist Larry Gopnik (Michael Stuhlbarg) barely has any idea of what's going on around him, although this is more accounted for by his good-hearted and somewhat empty-minded nature rather than active deception. He struggles to discipline wayward Koreans, tie together his cheating wife and friend as well as deal with the very nature of his faith. Authorities (Rabbis) also confuse Larry, though not maliciously or even purposefully as in The Big Lebowski or The Hudsucker Proxy. It's very interesting that the Coens can find a means of reinvigorating their primary theme of misdirection, miscommunication and misinformation in their third decade of making films, using the same basic narrative techniques, with only a few wrinkles, to make A Serious Man a very entertaining film.
Oh and Raising Arizona (1987) has Cage. Can't beat that.