by Roderick Allmanson at precisely 02:35
We come again to another round of The Long Halloween, our year-long second look at the greatest holiday activities you could ever imagine. Once a month we pick a Holiday and tell you what to eat, what to drink and what to watch. And really, there isn't an easier day then St. Patrick's Day in the middle of March.

The big thing about St. Patty's is that you need to lean everything green. As long as you're not Gay or Italian you should be able to fake Irish pretty well, if not, wear some green and start drinking. Your stereo should be pumping anything with bagpipes, banjos, fiddles, accordions and flutes. This time of year I always listen to the two major Irish Rock bands (for lack of a better term) and I'm not fucking talking about Bono. You've got to start blasting either Dropkick Murphys or Flogging Molly. It may just be my own Irish blood but these tunes just call to me. They stir some very deep urge to drink and fight, which you had better get into this day as well. It's the best way to keep up Irish Traditional Music without being terrible. 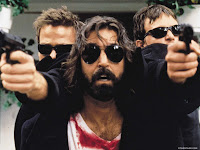 For many years all we had was The Boondock Saints (1999)

but then finally Marty gave us Gangs of New York (2002)

. Any one is a celebration of the Irish-American and requisite Green Day Viewing. While Saints is probably more typically Irish, anything Bostonian this day fits pretty nicely with the city's heritage. The Departed really isn't that Irish, but it does have a lot of Irish-American Gangsters milling about, getting drunk and killing each other. It's like watching Goodfellas (1990) on St. Gerbuzzio's Day, you know, it's close enough.

Gangs of New York might be the closest we get to a true Irish pride movie. It's a look at Irish Classic, an original soothing blend of rabbit and poverty. That's probably the best we're going to do this day.

No, not McDonalds. Mc as in like, the slur. I will jump on that bandwagon that makes fun of the Irish, they're the only race you can still do that with. We don't really care, we're too drunk to notice and too full of pride to let anyone else get us down. Anyway, traditional food this day is Corn Beef and Cabbage, but this may extend to anything green. That's all bullshit. If you want to eat like a true Irishman just chomp on potatoes. Preferably raw. Any stew is good, beef is classic, lamb is probably a bit more accurate. Really just picture the meal that a poor drunken 1840s Dublin dock worker would munch on and you can't go wrong. Make sure the cheese is cheddar and shredded thick and spread over everything, including your chips and beef. It's also the raving lunatic Mick in me that is actually getting pretty hungry describing this.If you're feeling different you're probably a bloody continental bastard and deserve a good fork in yer eye! Oooh...crossing lines now.

As for drinks ye be best with any kind of beer, tho the darker the better (unless ye goin' fer a wee bit of green brew, for which ye'd betta get some emerald die and the lightest suds ye got. Alright I need to stop). Really your only option at this point should be an extremely tall Guinness

, and keep it coming all day, starting whenever you wake up that morning. Continue until passed out or arrested. Actually just until passed out. You may drink in jail. There are actually a good amount of other brews to guzzle down, including Beamish, Murphy's or Harp. You may think you're getting away with some Killian's, but no! Killian's is a Coors brand beer, which couldn't be less Irish. So limit yourself to only seven. Other Irish Reds also keep to minimally three or four each. That should leave a nice round twenty or twenty-four Guinnesses for the day.

Well that's about if, folks. For some reason only the Irish have this day. There's no St. Gerbuzzio's day or St. Heimlitchz Day. Those are the best fake Italian and German names I could come up with. There is only St. Patty's and to be a true Irishman drink, fight and wear your finest Green Tunic. Like this guy. Hooray!