by Roderick Allmanson at precisely 00:36
Well my friends, I can scarcely believe it but the last Superhero Movie of the Summer is upon us. Captain America: The First Avenger (2011) hits theaters today and as the last in a long line of Marvel B Heroes I thought I'd take a look at the competing pantheons of Marvel and DC characters and what they all represent. Who knows, we might learn a thing or two about what makes these things so stinking popular and at the same time figure out if a movie adaptation is worth it. Let's start with the A-Level Properties, shall we?

A is for Asshole!

The DC A-Line-up is very clearly defined. You've got Superman, Batman and Wonder Woman. They've been around forever. Unlike the best that Marvel has though, DC often groups together some combination of the three and they all know each other at an extremely intimate level. Marvel is a bit tougher. Spider-Man is obvious and after that I'd say the most recognizable and marketable are Wolverine and Hulk. Let's dig into the cultural reverberations of all these folk and see what makes them tick. Superman is simply the Most Iconic Superhero of all time. He's the Original Flying Brick. He's built of everything that every other hero shares. He's the Boy Scout, honourable, powerful and heroic. The nuances of his character are what makes him interesting though. He has a duty above all other heroes to literally shape the cosmos in some instances along with a balance between pride, humility and stability that he always battles with. This is of course, completely wasted in the majority if his films.

Batman is the opposite of Superman. While Superman was born with All-Encompassing Powers, Batman is self-made (possibly arguable) into a perfect mental and physical human specimen. Thus he represents Human Vigilantes and classic detectives while Superman is the Flying Brick. Wonder Woman is the chick. She really just represents all female heroes, though her Origin and most of her iconic stories are so terrible that she hasn't really been able to break into the mainstream media as much as she should have by now. I mean, that pilot sounded equally as awful.

Naturally Marvel is very different. Spider-Man and Hulk represent heroes unlike Superman or Batman who didn't choose to have their powers. Part of their conflict is how they deal with these powers. Spider-Man is a good-natured kid though and has probably the funnest attitude of any A-Lister. The Hulk, depending on his incarnation is absolute Id, the Brawler, uncontrollable. Wolverine's power acquisition doesn't matter as much as his attitude. He's the ultimate anti-hero, a fanboy podium to pin all their badass dreams to. He's really the least interesting of the six other Heroes in the A-List.

These six were the first Superheros to get the Big Screen treatment (except Wonder Woman, who has no good story to tell, which isn't exactly her fault) but as we're running out of stuff do to with these guys (nuh uh), there have been many more B-Hero Films as of late. On DC's side I'd consider the B-Listers to be the Green Lantern, the Flash and Aquaman.

The Green Lantern has made tremendous strides in Comic History as of late, really getting into what makes the character tick and giving him important things to do. Of course, the film probably set all that back a few decades. GL represents the Galactic Nature of superheros, the Space Travel and Science Fiction sides. Spinning off Blackest Night it has also come to represent very basic emotions, will and intense inner conflict. It's not surprising that the conclusion of the Sinestro Corps War features a Depowered Hal in a Depowered Fight against a Depowered Sinestro. It's a conflict of minutely different ideologies.

The Flash is a well known name but not a well known character. I love the Wally West Asshole version; the immature dude who can still be a hero. He also represents a very basic superpower - superspeed. There are plenty of good Flash stories but they do all get kind of weird with Cosmic Treadmills and Speedforces and other stuff that really bogs down any grounding that a cool character should have. And Aquaman's just a joke, I think he represents terrible Superhero ideas that got lodged in our Collective Pop Culture Consciousness. 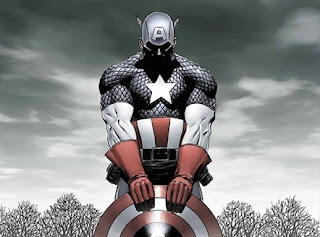 For Marvel's Part there are the three big B-Names that have fought to topple both the Film World and the actual Marvel Universe as of late, these are Captain America, Thor and Iron Man. It's important to note here that Marvel's B-List includes basically the characters most important to the Marvel Universe. Captain America is almost like a Batman, he's as far as a Human can go. No shit. He's all Bravery and Leadership over smarts or Superpowers. He's not absolutely more patriotic than someone like Iron Man although his name has become synonymous with American Jingoism. He IS also a fan of liberty and independence though.

Iron man is the technological superhero. Despite his creation in the 1960s he fits in very well in our current age. He's all computers, mechanical muscle and ingenuity. Although the films haven't really treated his character as such, he's also a political conservative and really a huge asshole. Thor is really Marvel's answer to Superman. He's a god and thus represents the Magical Side of Superhero-ing just as Iron Man represents technology. The melding of both worlds is a property unique to universes like Marvel and DC and their likewise meeting in The Avengers (2012) will be interesting.

C is for Cunts!

There are even more heroes and heroines abound and these guys may get a film someday. Some actually have already. These are people who are pretty important in their Comic Universes but no one in the real world gives a shit about. These are the Martian Manhunter who has a ridiculous amount of powers, including Super-Strength, Flight, shape-shifting, intangibility, telepathy and super-breath. Just don't invite him to a campfire! Yeah, his weakness is fire. That's the same weakness that Newspapers have! I don't think he could ever carry a movie, he represents cold and distant heroes, unrelatable yet unwavering in duty. Yay.

Then there's Hawkman, or Hawkgirl or Hawkwoman, it doesn't really matter. Hawkman's actually a gnarly badass but with an origin story so absolutely twisted he'll never carry a film. These guys just need to be background objects in a Justice League film. Lastly I'll include Supergirl / Power Girl or any of their incarnations as DC's other C-Lister. I will never ever say no to a Power Girl movie. She really represents the blatant Sex that Comic Book Characters of her Ilk possess, which is either empowering or demeaning, depending on who you're asking.

I'll also place the Green Arrow here, who is DC's bleeding heart Liberal to Marvel's Asshole Conservative Iron Man. This is actually an awesome, unique Green Arrow idea that will likely never be made.

On Marvel's side I consider this level to include Daredevil and Ghost Rider, both of whom can be interesting in the right hands. Ghost Rider represents Demon or Hellish Heroes, but it's his connection to the man (Dan Ketch or Johnny Blase) that makes his character interesting. Otherwise he's just an emotionless prick running around setting things on fire. He is also fantastically powerful, something that made the first movie remarkably uninteresting. Maybe Nic Cage will have his way and Ghost Rider II: Funky Ghosting (2013) will get him that much coveted second Oscar.

Daredevil on the other hand represents...disabled Heroes. Actually Daredevil really is the grittier version of Spider-Man. He's not stalking SoHo, he's stalking Hell's Kitchen. He's in a literal world of darkness with source material that's actually adaptable to a noir-ish Superhero film (read: Dark Knight Clone). Other than that I'd clump in a lot of other well-known X-Men such as Storm and Cyclops, which really represent the Team Aspect of Superheroics. Possibly Dr. Strange representing the mysticism and wonder of the Universe.

D is for Douches

There are so many D-Level Heroes out there. They don't represent much more than seat fillers. For DC you've got Red Tornado, Black Canary, Plastic Man, Atom, these are awful. Every hero ever in DC has been in Justice League at some point, which serves more as a Crossover Tool than the very defined Avengers Program in Marvel.

I'd consider Marvel's D-Team to be a lot of those Batman-ripoff guys with very similar names like Black Panther, Moon Knight, Night Thrasher and Nightwing. Wait, Nightwing is DC. Shit. None of these guys should be in a movie any time soon.

Well that's about it. Clearly the supporting material is there and if these characters are treated well, that is really pumping up what they're supposed to represent, the films won't be that bad. Or they will easily be terrible, who cares. I'm sticking to my local comic shop anyway.