by Roderick Allmanson at precisely 00:23
Yesterday we talked at length at how both expectations of the Mandarin villain, based both from known comic book lore and marketing material for the film, may have affected, for better or worse, the reception of the character in the Iron Man 3 (2013). We also discussed some of the political implications of the film, including analogies to the United States and the War on Terror through Tony Stark and his struggles with the Mandarin, as well as his ever-present and often violent American industrial competition.

Today we'll discuss Iron Man's identity as well as some of the actual merits of the film, as well as its place at the crossroads of the kind of action films Shane Black made twenty years ago and the recently created ongoing Shared Cinematic Marvel Universe.

Who is Iron Man?

A central part of every Iron Man film is Tony Stark's difficulty in finding himself. It's not the most interesting concept to carry across three of the biggest films of the past decade, but it works. Perhaps it's also a metaphor for Stark's own rampant narcissism that all of these films explicitly revolve around the development of this single character and most of each film's conflict stems from the Stark's own faulty behavior. Stark first realizes how much of an asshole he is in Iron Man (2008) when he decides to forgo much of his nuttier party lifestyle that profited from military contracts in favor of a role as a superhero. In Iron Man 2 (2010) the first thing he announces is that "It feels so good to be back!" and in tune, seemingly has learned little to nothing from the previous film.

Iron Man 3 presents an engaging and rewarding left turn. The film constantly deals with the relationship between Stark and Iron Man, and which one really makes the hero. This has been echoed in other Iron Man works, from Nick Fury's assessment at the end of Iron Man 2 that the Avengers was recruiting Iron Man but not Tony Stark, or Captain America's chastise of Stark in The Avengers (2012) that without his fancy suit of armor, he'd be nothing. 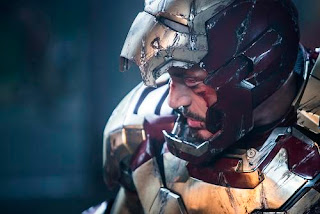 As if tackling these criticisms directly, Stark spends a tremendous amount of time in Iron Man 3 outside of his suit. This was a genius move on the part of writer / director Shane Black, who pushed Stark to truly test whether it's the Man or Armor that makes the hero. At one point, as Stark seeps into despair at the prospect of his suit repairs being delayed he suffers a panic attack. His identity has become synonymous with the suit, to the point where it literally stands in for him on both casual and superhero business as he controls it remotely. When it's taken away from him, he really struggles accepting an new identity as a more vague "mechanic" who can fix all kinds of problems with many tools rather than just "Iron Man" who relies on the armor, but once he does, he's able to move on.


Other panic attacks seem to be induced from his experience during The Avengers, or as it is referred to within the film, "The New York Wormhole." The film never really explains why this is happening, which is a substantial fault, but we're left to guess it had something to do with the near-death experience he suffered, or buy what Guru of All Things Marvel, Kevin Feige has to say. That can't really be it, that happens all the time. Tony was more likely threatened because suddenly he's not the big stud in the universe anymore. Again, this extends to the franchise itself. Iron Man movies were always seen as pretty palatable to audiences because they were grounded in some sense of realism. At least in the sense that technology is more easily digested than monsters or magic. Apparently.

So, into this world that Stark knows very well and has always been the king of is thrown magic, monsters, aliens, and all kinds of crap. Stark isn't suffering from PTSD, he's suffering from an enormous ego threat. He's concerned about his place among the Superfriends, especially because he tends to walk thinner ice with Nick Fury than anyone else. After all, he's just a mortal man with no actual skill besides his mind. Suddenly his world is much more dangerous. As mentioned earlier, he also no longer has a place helping the U.S. Government, so he's kind of in limbo here, which may explain why he's so quick to jump on the Mandarin hunt as a way to prove his worth to himself.

In the end, he removes the shrapnel and arc reactor from his chest (who knows why he couldn't do this before - maybe Extremis helped or something. It is not explained), thus proving to himself once and for all that it is the Man who makes Iron Man, not the armor. He is also no longer bound to the role, which he always felt was necessary with the crap in his chest. He now has the choice to become Iron Man as just one facet of Tony Stark, which is fitting enough a conclusion to an individual franchise series with an actor whose contract is up as we're going to get.

There are other identity struggles in this film. James Rhodes (Don Cheadle) makes the transition from War Machine to Iron Patriot in order to sound more properly like an enforcement tool of the U.S. Government, although perhaps War Machine is more appropriate. Really, though, it's a strange appropriate of the Iron Man / Captain America amalgam conceived by Norman Osborn during the "Dark Reign" comics storyline that is used her genuinely rather than the ironic way the writers crafted Osborn's manipulation.

Lastly we ought to talk about Pepper Potts (Gwyneth Paltrow), who goes through quite a bit of changes here. She is never actually a damsel in distress, although it may seem like it. In fact, throughout the film she seems to be able to handle herself a bit better than Stark in a tricky situation, from briefly saving his ass while in the Mark 42 Armor to surviving a plunge to her death by way of the Extremis virus. She even gets to kill Killian. Ra ra ra. She is never really conflicted by who she is, though, which makes her just about the only character in this whole damn movie not to have identity issues.

So, is this actually a good movie? It's certainly one of the better Marvel movies. What starts as a more typical good vs evil story ends up taking a left turn and becomes more of a detective / action movie than a superhero movie, which is a good thing. If Iron Man was the candy-coated template for Phase 1, then Iron Man 3 is a welcome shift in tone, not to a necessarily grittier film, but a more intelligent and creative way of telling the superhero story and blending it with some good old fashioned action beats. There has been this divergence in blockbusters away from the action film and more towards the superhero film as of late, and Iron Man 3 pleasantly rectifies that. 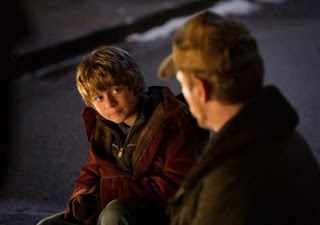 There's lots of nice bits here. It's refreshing in an Iron Film to see villains who aren't just in other suits, and the fact that the new Extremis villains' powers actively disable the suits make them a particularly nasty foil to Stark and Rhodes. In addition to this, there's almost a nice little Empire Strikes Back (1980) Millennium Falcon going on here where the lovable Mark 42 just keeps breaking. Good touch. There's also the addition of Iron Lad (not his actual name) in the form of a little kid who actually isn't that annoying! In fact, some of his banter with Stark are the best moments in the film and it never feels cheesy or clichéd.

Of course there are a lot of problems here. It constantly feels like a backwards advertisement for The Avengers, although there isn't much presented in terms of moving forward (see our preview for how it had such a different role kicking off Phase 2 with a conclusion rather than introductory story). This was refreshing, to be honest, but what about those poor fanboys whining in the theater?

Ultimately the biggest issue with this film is what it could have been. As it begins it very quickly resembles a Kiss Kiss Bang Bang (2005), Shane Black's only other directorial effort, as well as the film that secured the Iron Man gig for Robert Downey, Jr. The innovation and overall awesomeness of that film's narrative style is quickly dropped, though, and the thought that Iron Man 3 could have been our superhero version of that film is devastating.

Other parts are very Shane Black-y. The Christmas setting goes along with Lethal Weapon (1987), The Last Boy Scout (1991), The Long Kiss Goodnight (1996), and Kiss Kiss Bang Bang (2005), which is nice to see our first Holiday superhero flick. The dialogue is also razor-sharp, and the first ten minutes may be some of the best of any superhero movie. The film stumbles from there, however, to a rather sloppy and rushed conclusion. There are also some issues with how the Mandarin was handled, which, as we said in Part 1, do not necessarily have to do with expectations of comic book fans, but with expectations based on marketing material, and even the first hour of the film. There may be some debate as to whether this rug-pulling was dastardly or brilliant, but as Killian bellows "I AM THE MANDARIN" at the finale, I didn't have the greatest taste in my mouth.

Shane Black truly brought back the 90s action film into contemporary Superherodom. Will that really affect the rest of Phase 2? Will Robert Downey, Jr. suit up again? Is it better or worse that this was more a standalone film than an interconnected one? Who the hell knows, but it was pretty damn fine.

What did you think of Iron Man's final (maybe) solo outing?