The Road to a Blockbuster: Google Crashers

by Roderick Allmanson at precisely 05:55
As dawn peaks its head over the horizon of another Summer Friday, it's time again for the Road to a Blockbuster - NMW's weekly glance at the critical, commercial, and cultural potential of the big studio tentpole Summer Releases. We're interested not only in how these films are going to do this weekend, but whether or not we'll care enough to talk about these things five, ten, or even twenty years down the line. And after a rigorous May filled with big epic spectacles that essentially stalemated at Furious 6 (2013), we're left with this crap. The Internship (2013) and The Purge (2013).

Advance reviews of the Owen Wilson / Vince Vaughn Google movie effectively label it Google Crashers, and there's no real reason to think otherwise. According to this review, everything that makes us shudder in the preview material (pop culture references to Professor X, the whole thing as a not-so-sly advertisement for Google), is present and center and unrelenting. 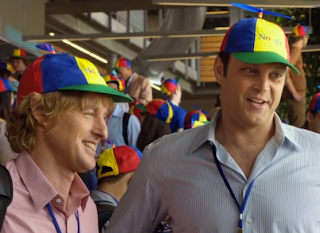 Vince and Owen became a comedy dream team in the 2001-2005 heyday of the Ben Stiller / Will Ferrell-led Frat Pack Era. I still despise that name, it seems like such a limiting, cliché-inducing title for some damn innovative pre-Apatow comedy, but there's nothing really better that sticks. Since this time, both actors have squandered much of their comic potential, Vaughn moreso with endless horrors such as Fred Claus (2007), Four Christmases (2008), and Couples Retreat (2009) unleashed onto the world. There's that fine line in Vince's character between fast-talking asshole and fast-talking-but-loveable asshole that he really hadn't matched since Wedding Crashers (2005). In some ways he hit it again in The Watch (2012), which suffered from being a horrible movie despite his enjoyable performance, which is similar to Eddie Murphy in another Ben Stiller vehicle, Tower Heist (2011). So, really, no one is excited about Vince Vaughn anymore.

As for Owen Wilson, he's also had a troubled career since Drillbit Taylor (2008) and has really phoned it in on ensemble crap like Night at the Museum: Battle of the Smithsonian (2009) and Little Fockers (2011), as well as lending his voice to atrocious films like Marmaduke (2010) and Cars 2 (2011). It may no longer be surprising that he slipped a suicide attempt in there. Troubled times for sure, but after playing a bit against type in the criminally underseen and underrated Hall Pass (2011), I have more stock in him than I do in Vaughn. Still, no one else does.

So, is there any hope for this movie by sticking these two once-glorious comic icons together again? Nope. It really does seem to play like one long advertisement for Google, and while this has been acceptable for some films in the past, there is no getting around it here. Comedies work better as satire, and if there's no edge or criticism to its inclusion of Google (and for damn sure there won't be), it ends up lacking its punch. Punch is all comedy has going for it. It needs to stir up strange incongruencies in the brain - putting these bits together makes us laugh. No bite = no laugh. Despite Vince and Owen's best attempts (and yeah, to be clear, some of these jokes are surprisingly actually funny, so there may be hope), it just seems outdated and trite. The Onion is fairly spot on here. In the 2020s we ought to still be talking about how great Wedding Crashers is. The Internship will not be a part of that discussion, unless followed by "Let's not mention that" or "...what movie?" 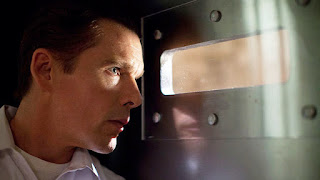 The other big film opening this weekend is The Purge, which is about...I'm not really sure. That's always a good test on these days - do I know what the movie is actually about before it opens? Has the marketing material out there done its job? No, no it hasn't. I had to look up this day to even figure out that The Internship drops today, much less The Purge. It apparently has Ethan Hawke and some creepy masks. Ah, Sinister (2012), right? I also had to look that up for the title. All these horror movies have the same title now. Insidious (2011) is the one that's actually good, though, right? Oh, someone help me.

What's a shame is that after looking at the synopsis for The Purge, it actually looks pretty cool. It takes place in a strict, government-controlled future where all crime has ceased thanks to a nifty cathartic 12-hour period once a year called The Purge where all emergency services are suspended and you can do whatever the hell you want, including murder. Cool, crazy stuff, but this hasn't really gotten the push it needs to succeed. Of course, it's only cool because Star Trek did it first. It's actually more thriller than horror even, which means my comparison to Sinister was misguided (and I actually pay attention to this stuff), although it's still Ethan Hawke defending his family in his own home, so maybe it's not that far off the mark.

So can this thing catch on after it sputters this weekend? Usually with smaller horror / thriller type films like this, they need to be real damn good or real original to do so, like Paranormal Activity (2007) or The Raid: Redemption (2011) to get the great word of mouth needed to really get noticed and embraced by pop culture at large. From the looks of it, though, despite is wild premise, The Purge is apparently a mediocre movie, which will hinder it in the long run.

So what's to come of this weekend? A three-peat of Furious 6? The Internship ought to scrounge up enough bucks to nail the #1 Stunner Spot, but ultimately, everyone will still go see Furious 6. After all, it's the best movie that's come out so far this summer. I'm with you - I'm not sure how that is possible, either.

Labels: Movies, Road to Blockbuster, Summer 2013, The Purge
Email ThisBlogThis!Share to TwitterShare to FacebookShare to Pinterest