The Road to a Blockbuster: iAss

by Roderick Allmanson at precisely 09:31
There are only two Fridays left in the Summer Blockbuster season - can you believe what a long, crazy, and fairly disappointing summer it's been?! There have been ups and downs for sure, but more importantly, it's been a crazily crowded Summer with an unrelenting hammer of big new films all trying to become the next big thing. More recap will come next week - for now in this penultimate edition of the Road to a Blockbuster we will examine the critical, commercial, and cultural potential of a handful of new films opening today, with particular focus on two heavily hyped up properties.

First, though, let's briefly talk about two films getting similar-sized releases, but without much fanfare. First is The Butler (2013), which is about presidential butler, Cecil Gaines, who worked in the White House through eight presidential terms in the middle of the 20th Century. It seems like interesting enough fodder, but hasn't at all gotten its share of attention. Perhaps the boffo casting, which includes wackiness like Robin Williams as Eisenhower and John Cusack as Nixon contributed to an awful film instead of an intriguing one. At any rate, I have no idea how this movie is, it's completely under the radar.

Next is Paranoia (2013), which stars Gary Oldman, Harrison Ford, and Thor's Brother. That also seems like decent marketing fodder, but it's had about a week's worth of commercials featuring a Bald Indiana Jones and that's it. Harrison Ford actually seems to be in a surprising amount of movies lately, from 42 (2013) and Paranoia to an upcoming string of high profile outings including Ender's Game (2013), The Expendables 3: Diaper Duty (2014), and supposedly Star Wars Episode VII: Jedi Pie Fight (2015). Still, not much of a push on this one. Let's get to the real heavy hitters this week: 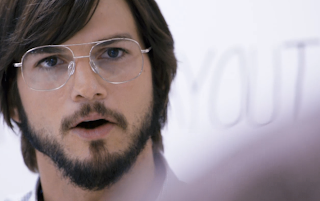 First is Jobs (2013), which used to be stylized as jOBS until it had a favorable type formatting change. The film features the life story of Steve Jobs who started Apple, was a rebel, got kicked out, and then came back in and changed everybody's life. It stars Ashton Kutcher, who basically got the role because he sort of looks like Steve Jobs and is also a huge dick.

So what are the odds of Jobs becoming the critical bio pic of our time? I'd say awful. The film feels rushed considering Jobs passed away in October, 2011 and instantly had his life and work canonized. He's also such a polarizing figure, with most Mac junkies adoring his every word, and most PC folk remaining skeptical of his efforts to integrate life and technology. Also, overpricing. Mac is so damned expensive and they force you into this cult that needs to upgrade every year. Sorry - I am one of those skeptical PC folk. At any rate, there are people who love Jobs and those who hate him. The film seems to be positioning the former CEO as a tortured, innovative, and underappreciated genius without anything substantially critical to say about his life. That will ultimately hurt any real merit this biopic had.

If you consider a film like The Social Network (2010), which also essentially served as a biopic of one of our current technology innovators, Mark Zuckerberg, the film both acknowledged his genius and highlighted many of his personal flaws and problems. That's why it was nearly a best picture winner. Jobs seems to be doing nothing but lip service to its subject matter. Since it is coming out so close to his death, anything less may actually seem inappropriate (who is going to trash the man after he just passed away?), but therein lies the problem with this movie existing at all. 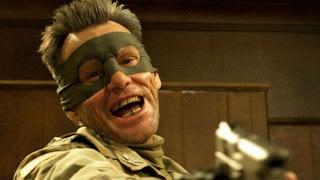 Finally, we have Kick-Ass 2 (2013). The first film was entertaining, refreshing, and despite featuring way too much MySpace for its own good, was saved mostly by an insane performance by Nicholas Cage as well as a little girl repeatedly using the word "cunt." It was a magical adventure. Still, the comic sequel seemed plagued by unnecessary amounts of violence that only served shock value without any real theme or merit. The movie will surely contain less of this, but even superstar Jim Carrey, who is really the Nic Cage of this installment, has attempted to distance himself from the film.

So, what of it? Kick-Ass 2 has been everywhere the last couple weeks, and considering the first film at best did OK at the Box Office, I'm not sure why this even deserved a sequel. My guess is that this film will be driven by violence again, and I'm not totally buying that it shows the "consequences" of violence as Mark Millar suggests. Nothing about these films is that realistic, despite its core premise. Like Cage in Kick-Ass (2010), I bet Jim Carrey, the dude who apparently hates this movie the most, will be the most entertaining feature, and that will be that.

We have one more week of Blockbusters to handle and then it's back to school for everybody. What do you think of Summer so far?