Seinfeld and its Paradoxical Fear of Deviations from Normalized Society

by Roderick Allmanson at precisely 23:36
One of the greater ironies of the 90s TV sitcom Seinfeld that remains unaddressed in extant literature (Seinfeld has extant literature, right?) is the gap between the fundamental conflict that drives the series - the extolling of daily life minutiae - and the strict perceptions of the characters within the narrative. Essentially the show is comprised of four Manhattanites struggles to align their personal mental constructs of "normal" social behaviour with those of the rest of the world. The irony of course, is both that more often that not, the actions of Jerry, Elaine, George, and Cosmo deviate tremendously from what any sane person would do (as any sitcom would have it), and that their very act of hyper-criticising the deviations of their contemporaries is in itself, abnormal. This has actually been extensively researched in Seinology: The Sociology of Seinfeld by Tim Delaney.

Seinfeld still captivates me. When I launched Norwegian Morning Wood five years ago I formed six "Posts About Nothing" digging deep into each of the four primary characters. I think what's fascinating is that Seinfeld was such a gargantuan show, both in terms of its original popularity, as well as its unsurpassed success in syndication and rewatchability. The ubiquity of Seinfeld, as you're about guaranteed to still be able to catch re-runs three or four times a day between TBS and your local network affiliates, makes certain things stand out that were passed over the first time, or the first dozen times. Changing time periods from the show's last episode in 1998 to the current 2014 also makes certain aspects of the show more apparent, recognizing that television twenty years ago had very different standards for depicting characters beyond the average white, middle class, straight American. Seinfeld crafts a distinct fear of the Other - any deviation from this mix of race, economic, or sexual standing. Part of its repeal, though, is how it remains a progressive show by dealing with this fear in some cases head on. What is more apparent is its complete misunderstanding and misinterpretation of social norms, but in many ways, this conflict is the purpose of the entire series. 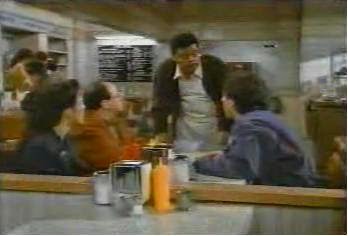 As far as racial standards go, the show generally deals well with African-Americans. Blacks appear in their fair share of roles as janitors or sleepy security guards, but also as Board Members of the Susan Ross Foundation and as writers for J. Peterman. I'm concerned over a few occasions of intimidation, though, that becomes amplified due to race. This happens in "The Outing" (S4;E17) when Larry the Cook at Monk's is able to add more threat to the hapless Jerry and George due to their black fear. A similar event happens in "The Bookstore" (S9;E17), when the African-American woman behind the counter at Brentano's threatens a meek George with some brain-punching.

Other parts of Seinfeld seem to be more self-aware of the racial gulf, though. Looking back on "The Wife" (S7;E17) seems unfortunate in light of Michael Richards' post-Seinfeld racial outbursts when an obliviously overtanned Kramer essentially visits his girlfriend's family in blackface. This was also lampshaded in the Curb Your Enthusiasm episode "The Table Read" (S7;E9), which featured Michael Richards finding himself entangled in racially charged situations. I also look to George's Sugar Ray Leonard debacle in "The Diplomat's Club" (S6;E22) which isn't a wholly terrible representation of African-Americans on screen, but it does highlight the naïveté of the white community, which Seinfeld is very emblematic of, towards Black Culture and its people in general.

The end result can be middling towards Black people. Seinfeld's record for Asians, though, is horrendous. Awful stereotypes abound in "The Race" (S6;E10) and "The Cigar Store Indian" (S5;E10). "The Tape" (S3;E25) presents an ancient Chinese baldness cure-all which mystifies the white characters. It also introduces Ping, who somehow has tremendously more broken English than his sister, Cheryl, as seen in "The Vias" (S4;E15). Asians are rarely more than Chinese food service workers, from Ping to the entire episode "The Chinese Restaurant" (S2;E11). There isn't a tremendous amount of fear in these scenarios, except for Elaine's fear of Cheryl, but that stems from her being a shark in the courtroom. This likely has more to do with the fact that Western society has more often treated Eastern cultures as effeminate, ineffective, and magical rather than any real threat.

In dealing with homosexuality, Seinfeld is surprisingly progressive, and much more so than in racial terms. Very early on in the series, in "The Subway" (S3;E14), Elaine casually goes to a lesbian wedding, and when she's confronted with bigotry on the subway, she rebukes the hater. There is also the openly gay eponymous character in "The Wig Master" (S7;E19) who is not defined by his homosexuality. Actually, the only character who really has a problems with homosexuals, or at least the fear of being perceived as one is George, who freaks out at the prospect in "The Note" (S3;E1), "The Stall" (S5;E12), and "The Cartoon" (S9;E13). Of course the aforementioned "The Outing" is troubling when every male character seems stunned and ashamed at this prospect, although they mention "not that there's anything wrong with that" eight times, that fear is still on display.

In an episode like "The Outing," though, that fear seems to be more a reflection of the prejudices of society at large rather than insensitivity on the part of the show. More troubling though, even though their cavalier attitude is liberating in a sense, is Elaine's compulsion to "fix" a closeted homosexual man in "The Beard" (S6;E16). It obviously doesn't work, which actually speaks more to the fact that sexuality isn't a choice or preference, which is astounding for a show that otherwise contains a healthy amount of fear of turning gay because a male masseuse touched you. 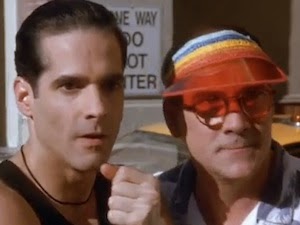 Bridging the fear of homosexuals and Hispanics is finally Bob and Cedric, who are kind of mystifying as stereotypes. Puerto Rican, homosexual street toughs? Kramer is continually intimidated not by any of their racial or sexual characteristics, though, and more by their insane antagonism, and when not dealing with him they seem to be otherwise rational people. Still, their easily swayed emotions may be a signal of the middle class white fear of "other" kinds of people. Much more prescient is the tension that fills "The Busboy" (S2;E12), which derives from the anxiety felt by Kramer and George upon visiting a young Hispanic's apartment in what is presumably a rough part of town. The episode actually does subvert this fear by giving the busboy, Antonio, some very human characteristics and an uplifting ending, proving that the white fear is really a confounded property.

Despite these many instances of insensitivity, there are signs that Seinfeld knew what it was doing. Jerry pledges racial tolerance and understanding through the black and white cookie in "The Dinner Party" (S5;E13), although it's telling that the cookie ultimately causes him to vomit (apparently even when attempting to become benevolent, the white man literally cannot stomach racial peace). "The Cigar Store Indian" features obtuse and continuous racism directed at Native Americans that is abhorred by most of the principal characters. And "The Chinese Woman" features equally aghast moments when confronting a white woman who desires to be Asian for unexplained reasons. Estelle's belief in the mystic wisdom of who she thought was an Eastern woman, though, is also telling of the white obsession with attributing strangeness and magic to foreign others.

And we didn't even mention the vague foreign fear of the Soup Nazi, who is reduced to a yelling screaming mysteriously angry "foreigner." Whether intentional or not, though, Seinfeld does more to merely expose this fear that upsets the delicate white lives of its characters than to relish in it or suggest that it's acceptable behavior. The final thesis of the show, that these characters should all be imprisoned for their selfishness and long periods of despicable actions couldn't be more appropriate, and its lukewarm reception has more do with the fact that is viewership saw too much of themselves in the minutiae of the show than its misplacement as an ending. It's difficult to turn that kind of judgment on one's self, which, in wrapping the show in a safe, comforting middle class urban white setting, Seinfeld did to its viewers by condemning them along with the fab four at the finale of its run.