Looking Back on Looking Forward: 2014 Under the Microscope

by Roderick Allmanson at precisely 09:50
Way back when 2014 was in its infancy, I called out the ten films I was looking forward to the most. It's always a nice measuring stick to look back and see just how dumb and naïve I was to think that any of these would be good. A lot of my anticipation was justified, and nothing here outright bombed (okay, that first one did), but there is a resound meh from this list. So let's go over what I thought was going to be awesome:

Oh no! Right out the gate I'm dead in the water. I knew this was going to suck, though. I was mostly just pumped up because I actually saw this being filmed in my hometown of Rochester, NY, which is a first for me. What I couldn't have predicted was just how bad it really was - I mean, it's nearly destroyed what could have been a promising franchise with one of the most popular superheros of all time. But really, if it's enough to get Spider-Man back into the Marvel fold, then I'm okay with this and the next one tanking hard.

I thoroughly enjoyed this movie, which I think flew under a lot of people's radar. The plot is paper thin, but Jude Law turns in a really engrossing, slightly out-of-character performance as a man nigh-unlikable who's trying to find some way to move on to the less stupid things in life. It also has an amazing ending that showcases Dom's cleverness along with a full-fledged assault on his masculinity, which really causes a huge push on his character. It's tough to get past the lunacy, but this is an underrated 2014 flick.

This was tremendously well-placed and probably should have been a bit higher. There's no reason why this movie should have been good at all, but then again, Phil Lord and Chris Miller's 21 Jump Street (2012) had no right to be good, either. From taking what could have been a crass, commercialized story and turning it into a strong metanarrative rallying against both pop culture conformity and hyper-specialization to its canny summation of all the potential awesomeness of playing with LEGOs, it hits everywhere it needed to.

I will first say that I didn't think that Transcendence was as mind-numbingly awful as a lot of other people thought, but still, when that's the best I can say, it doesn't bode well. I'd consider it a movie filled with lots of really interesting and relevant ideas that's wrapped in a stiff shell of inconsistent character work and stretches of logic that we can never totally buy. It's not quite an action movie nor is it quite the philosophical treatise that it wants to be, but it still gets you thinking about the next stage in human evolution, which will almost certainly be technologically driven. There's not a lot of other films out there playing with this concept, and not even Paul Bettany's bizarre Stockholm Syndrome can hold that back.

At the time of writing the preview last year, all I knew about Interstellar was the director, the star, and the name. It was enough to get me pumped and thank goodness, because it's the best film on this list. Big, original, engrossing, and intellectual blockbuster filmmaking is crazily rare in the same year that Transformers: Age of Extinction (2014) made more money worldwide. I'm not sure if a director other than Nolan could pull this off right now (in execution and in merely getting the film greenlit), which makes encouraging these kinds of films all the more important.

#5: Guardians of the Galaxy

I'm glad Guardians comes after Interstellar because it's on the complete other end of the spectrum. It's the second-best movie on this list and also filmmaking that needs to be encouraged for the completely opposite reason - it's fun! That fun is derived from character, though, which is critically important, especially considering the off-the-wall characters in this thing that could have very easily slipped into forgettable B-movie doofiness. Instead it's always playing with itself, comfortable being a space opera, a dude flick, and an 80s throwback all at once.

#4: Dawn of the Planet of the Apes

Increasingly my stance on this movie is that the scenes with the Apes are some of the best of any movie this year, while the scenes with the humans all kind of fall apart. I think it averages to present an okay-moviegoing experience that isn't the all-encompassing gift from the movie gods it felt like when it came out.

There was no funnier movie this year, but I still have issues about how it hung its hat on calling out movie sequels for being repetitive but never really innovated on its own despite trying really hard to form some kind of comment on it. I guess I finish with mixed feelings on this, although I can still think of half a dozen hilarious scenes that make me giggle with glee. And who knew that Channing Tatum and Jonah Hill would be an invincible comedy team?

Here's another film that I liked more than it deserved. It was trashed a lot for its midway ditching of Bryan Cranston in favor of Kick-Ass, but I actually thought that his departure was perfect. I don't buy either argument either for or against holding back on seeing Godzilla himself. It's not really executed with perfect Spielbergian attention to tension and investment in character nor does it completely make the first half a waste of time. I'm definitely a fan, even if most of the flick is just waiting for a really satisfying final ten minutes. 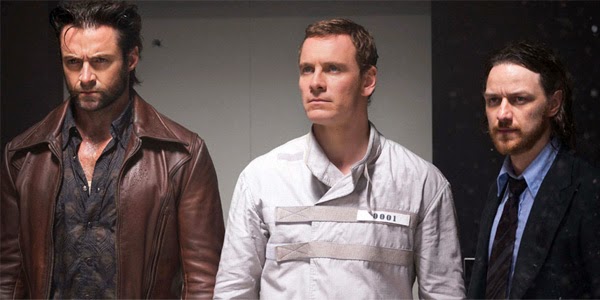 I absolutely loved this film when it first came out, even though when I thought about it for a week after I realized how phenomenally stupid and inconsistent so many scenes were. It's a testament to Singer's directing skills that most of this is masked in a nice layer of candy upon first viewing, though. It's a seamless mix of First Class (2011) and the original X-Men casts, even if that actually just means First Class and Wolverine. More importantly, though, it erased the history of every crappy X-Men movie. Like Guardians, it is also a really fun movie, despite focusing mostly on a Robot Apocalypse.

So there you have it, folks. Out of our Ten Anticipated Movies, I'd say about three were justified, six were meh, and one totally sucked. What will 2015 bring? Probably more crap. Stay tuned after the New Year to find out our picks!

Labels: Best of 2014, Godzilla, Guardians of the Galaxy, Interstellar, LEGO, Movies, Planet of the Apes, Spider-Man, X-Men
Email ThisBlogThis!Share to TwitterShare to FacebookShare to Pinterest