by Roderick Allmanson at precisely 09:42
Movies are interesting among the producers of goods in that we don't really care who's making them. To some extent this is true of everybody, I mean, no one really gives a shit whether or not a cookie comes from Nabisco or Kellogg, in fact it'd be extremely difficult to even name each of their products offhand. But the irony is that through all this complete irreverence on the part of the consumer, big companies are locked in deathly dire competition with each other and will kill to get to the top.

This is why I've had my interest peaked by three trailers and one bit of casting news as of late. It's as if every major studio is suddenly throwing its hat into the ring and screaming to be noticed. A month or so ago I went on a long rant about what I thought of the Avengers: Age of Ultron (2015) trailer, and I think that went pretty well and I stand by that. I still think that's a decent trailer which does an excellent job of re-introducing these characters while mystifying just enough of the plot while maintaining intrigue to keep our attention going. That's really hard to do with a trailer. For a reminder:

A week ago another trailer debuted, which did almost as well, but had arguably a bit more of a wow factor and buzz going into Thanksgiving Weekend. That would be Universal's Jurassic World (2015). There's that bit of dread, a slight twist (an actually successful, up and running Park?), that "HOLY SHIT!" moment (Mosasaurus getting a snack), and that mysterious, dark intrigue (the brand-new super-badass hybrid Dinosaur). It even has a hauntingly mellow score, this time in the form of a super-laid back version of Johnny Williams' opus that contrasts with the havoc on screen. Jurassic Park is always this juxtaposition of man's need for order and nature's proclivity for chaos, usually to the detriment of man (don't worry - woman inherits the earth). A lot of those themes are still echoing in the cheesy B-movie sci-fi vibe the trailer gives off with the Frankensaur here, but the point is that this had big points that it got across well and made everyone on the Internet lose their minds. Here it is again:

That would be 40.4 million views as of right now. Not quite beating Age of Ultron, but that one had nearly an additional month of lead-time. For as big as Ultron felt, it never felt as monumental as hearing those riffs from Jurassic Park one more time, which is crazy because the franchise has totally had diminishing returns over the past few years. Jurassic World works because it feels like more of a new story instead of a re-hash. It's not like someone is lost on the Island again. Or there are lost little kids to find. Crap. It still hit nostalgia just right and seemed awesome.

Until Friday when Star Wars Episode VII: The Force Awakens dropped and everyone lost their damn minds. Not just nerds - everyone, EVERYONE is talking about this thing. It's crazy to think of what the actual power of this franchise is when it's not being bogged down by really really shitty movies and word of mouth. I mean, there are entire separate films devoted to answering that question. And I was curious, too, about how all this stacks up. So I looked at some Google search trends. Age of Ultron peaked admirably where it should, and Jurassic World is up there, but actually not as much as I may have predicted - but look at fucking Star Wars. On any random day there's about as much search activity to nearly equal the peak levels of these giants, but when the trailer dropped? It doubles the Avengers' peak and nearly triples Jurassic World. You may do the searches yourself, or check out this dandy bugger: 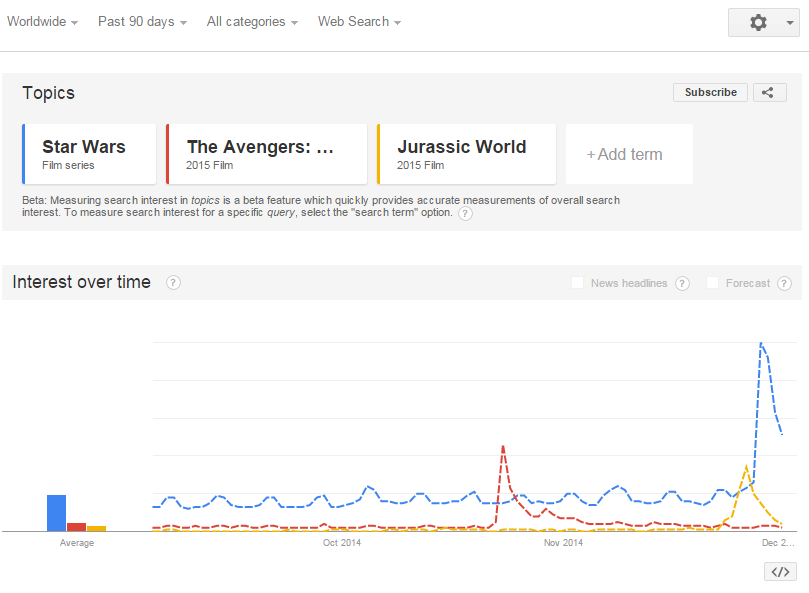 There has been a mind-boggling amount of trailer analysis. Everyone from master bladesmiths to Stephen Colbert are weighing in on the Sith Lightsaber design. People are offering detailed specs as to how that little rolly-ball droid may have originated and how it works. And of course, everyone on Earth and Hell are speculating about the three leads here (which mysteriously are not Han, Luke, and Lando), played by John Boyega, Daisy Ridley, and Oscar Isaacs. THIS.

Why is all this going on? Well, first and foremost, it doesn't suck. It's new and different at the same time, which is in line with all these other trailers, but Star Wars is different. Star Wars means so much to so many people - and by that, I mean that Star Wars is EVERYTHING to so many people that any glimmer of a Star Wars that doesn't suck is a huge monumental event. There's just that right level of nerd teasing (check out the S-Foils) and wha-moments (Is Boyega a stormtrooper or pulling a Luke and Han on the Death Star?) that it's just nirvana for all sorts of fans. So here is that one, again:

And I don't even know if this one is officially posted by a studio here, this is about the biggest one, which comes from just MOVIECLIPS Trailers, which is sitting at 40.9 million views at this current moment.

So it seems. Ultimately you'd have to add some of the other top hosts together and then we get to to those Avengers numbers, which neither of these other films really have. So, to get back to what I was originally saying, about Studios knocking each other around, first of all, it's insane and depressing to think that both Avengers and Star Wars are popping out of Disney's asshole these days, which is also why they aren't cannibalizing each other, with Star Wars dropping a solid seven months after its Robot-driven cousin. Universal, though, sure as hell wants a slice of that pie. And look at little Warner Brothers trying to make some waves with its ridiculous Suicide Squad Casting announcement. So let's talk about that for a bit.

This casting is absolutely insane, mostly because it's really good. DC is effectively lining up all these prestige actors for its projects, mostly because they'd otherwise be pretty bad. Suicide Squad is a really interesting title to come off so early in the DC Shared Universe Movie World because it's so damn out there as a concept - hardly mainstream friendly or even that well known. Will Smith as Deadshot? Out of every superhero that Will Smith could have played, he's going to end up being Deadshot? More importantly, though, this film straight up doesn't get made if Jared Leto isn't the Joker.

That's a huge bridge! That's your news! You can't just sign up anyone to play the role that single-handedly saved DC and changed superhero movies forever. There's always the Batman Begins (2005) argument, but The Dark Knight (2008) really was the one to put every single person involved on the map, and that was 80% Ledger's Oscar-winning Joker. How the hell do you follow that up and keep the cash flowing? Cast the dude who last won an Academy Award in the same category, who can kind of pull off the same thing. I don't really understand why no one remembers that the rest of Leto's roles are pretty shitty and he has more politics to thank for winning for Dallas Buyers Club than any talent, but whatever. It's a casting that looks really good.

The same goes for the rest of this. Margot Robbie is a natural, trendy selection after The Wolf of Wall Street; Jai Courtney was undoubtedly available; Tom Hardy is still made fun of for Bane, despite towering over Ledger's Joker, in my opinion; the other chick is pretty hot; but then there's Will. What the hell is Will Smith doing anything near this thing? Well, the honest truth of it is that the only films he's headlined since 2008 is a desperate sequel and a terrible ego project that everyone hated. I still think that when people hear "Will Smith" they think it's a big deal, although how did I miss that cat in Winter's Tale (2014)? He needs this bullshit, even though it's totally beneath him.

Now I'm totally off track. The fight for buzz completely interests me - there's only so much room on the Internet, after all. I actually mean that - how quick did we forget Jurassic World after The Force Awakens dropped? There's a delicate balance of timing there that's infinitely compelling - after all, all the nerds are going to see all this shit anyway, but what about those extra folks that really give a film its big bucks? The normies, as we might call them. You've got to stir up so much of the pot that all these nerd juices spill over into mainstream. And the prize? A few billion dollars ain't bad.

But Suicide Squad (2016) will suck with a really mismatched tone and do terribly. Now if I could only gear up you people for Space Station 76 2014....