by Roderick Allmanson at precisely 13:15
There were a few big announcements in the upcoming movie world yesterday - the first was a long-awaited trailer for Fantastic Four (2015), which is a franchise no one really cares about (and Fox looks like it's going the DC self-serious spandex route rather than the Marvel doofy route...rough choice for this brand), but much more important was the casting announcement for Ghostbusters 3: Vaginathon. That's really only a working title, my guess is that the final title gets rid of the "3," because it doesn't seem to actually be a direct sequel.

This is one of those projects that I'll only really believe is happening when I sit down in the theater. Actually I probably won't believe it until the movie is over - I'll always have some part of me waiting for Dan Aykroyd to walk into my theater and announce that they didn't actually finish it halfway through its premiere. All signs, however, point to this headed in a great direction, with director Paul Feig injecting some much needed life and energy into the project and the casting of four very talented comic actresses to inhabit the lead roles.

Somehow most of the Internet has avoided this, but I totally want to pair up each of these four ladies with the original leading men. I thought about this long and hard and eventually couldn't really do it, which is a good sign of strength for the project. Feig isn't grafting women onto the original roles, he's creating new ones (hopefully) based on their own comic personas. At this point it should be said that I am kind of against the all-female casting simply because I don't think it's really pushing feminism to just do a girl version of a guy thing. That's not really innovative. Why can't we have an entirely new property centered around women and just have that be popular? This has really happened with Feig's other work, even if it didn't quite turn out to be true. Bridesmaids (2011) was seen largely as the female Hangover (2009) and The Heat (2013) was the female buddy cop movie.

See the problem here? Female buddy cop movie is a really cool idea and The Heat worked better than it should have, but when will we reach the point where we call that "buddy cop movie?" Probably never, simply because the formula had been created and done to death with dudes for like thirty years. So, that's my major gripe with just casting women to fill in for men. I may have actually been more okay with a mixed cast that didn't seem so obvious in creating a gender flip.

The counter-argument is, of course, the fact that none of this should matter if the film is actually funny, well-made, and provides roles and launching points for funny women, which in the case of Kate McKinnon and Leslie Jones, it ought to do. That's really what Bridesmaids was about - it was billed as the female Hangover but is really its own movie. I'm not sure you can do the same with a big franchise, especially one whose tone is as tricky as Ghostbusters, but I have the kind of confidence in Feig that I have in Phil Lord and Chris Miller, who have an uncanny ability to turn any terrible-sounding property on its head.

Getting back to the casting, with the knowledge that this isn't really a perfect mix, I want to establish those distaff counterparts more directly. This runs counter to everything I said above, but it is a nice character exercise and it ought to help us understand the range and roles of these women. Let's try to take it from that angle. Let's begin with a review of the original cast: Harold Ramis as Egon Spengler: The straight man, although his esoteric nature is played for laughs. The brains of the group who can make their gadgets.
Dan Aykroyd as Ray Stantz: The heart of the group and the most filled with hope, wonder, who believes in ghosts more than anyone.
Bill Murray as Peter Venkman: The player, the smartass, the cynical sardonic breakout star, and the only one given a love story.
Ernie Hudson as Winston Zeddemore: Mostly used as the audience stand-in, the guy other characters can explain things to. He's also the only non-scientist, so more of a blue collar working dude.

Time to a take a whack with these ladies: 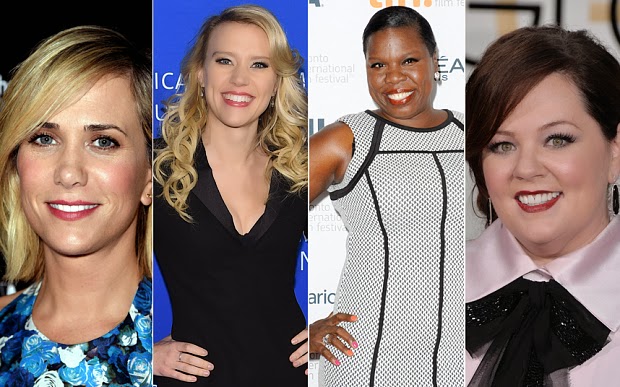 Kristen Wiig as Egon Spengler: For some reason Wiig is the only one I can picture doing totally straight-faced line read and inventing gadgets. She has an ability to go really really big, but is also probably the best actual actor amongst the lot and can do stoic really well while still being funny. She's obviously not Harold Ramis (who could also play real loose, such as in Stripes [1981]), and should add a bit more flair to the role.
Melissa McCarthy as Ray Stantz: There's no one else in this cast with more heart than McCarthy, who also filled this kind of role in Bridesmaids. She can also do outrageous, which is more Venkman, but Ghostbusters isn't really known for its fecal humour or potty mouth. Rough. There's no telling if this will be an R-rated Ghostbusters (we can only hope...no, there's no way in Zuul that's happening with this tentpole), but she ought to be dialed down. If that makes her more of a Mike & Molly McCarthy, I can see her being the Ray-type gullible innocent soul more than anyone else.
Leslie Jones as Peter Venkman: These last two were pretty tough because neither really has many roles to observe other than bits from SNL. While it's really obvious to pick Jones as Zeddemore (c'mon, people), I can see her more as a fast-talking skeptic than the blue collar audience surrogate. Like this as a matter of fact. Bill Murray and Leslie Jones seem like really strange comic siblings, and Murray has always been far more subtle and sly than the boisterous Jones, but I think she can pull it off. Although I like to think of Venkman another way - after the Stay Puft Man explodes, who is going to emerge looking perfect and not covered in goo? I can see Wiig doing that, but no one is a better Spengler.
Kate McKinnon as Winston Zeddemore: Here's a real oddball choice. McKinnon could slide easily into either Venkman the brash young, quick-witted sarcastic scientist or Spengler the stoic brain, but she also randomly excels on SNL by playing old down on their luck but extremely positive women, which is really Zeddemore-like, in a way. He's a hard-working dude but he's also really open-minded and a true team player. That's surprisingly McKinnon-like.

So, what do you think? Am I encouraging the lens of distaff counterparts over true original feminism? Or was that something that the new Ghostbusters was always doomed to face? I'm kind of curious about everyone's opinion, to be honest. And do you think I have these characters nailed down or will they be totally new? I do lean towards totally new because no one quite fits into a mold. At all. That's actually the most encouraging sign when you get down to looking at this, to be honest. It will be a whole new property because no actress here can fit snugly in the shoes of the 'Busters who came before.

Or they'll try to force it and this movie will suck hard.

We're waiting something outrageous like July 2016 for this one, so sit tight.