A Closer Look at the 2015 Directing Nominees

by Roderick Allmanson at precisely 09:21
Here we are again, folks - another week closer to the 87th Academy Award Ceremony, so it's time to take a gander at the Nominees for Best Director. You can check out our dishes on the Actors and Screenwriters here and here, but today it's time to get into the folks who are nominally the most responsible for the execution of a film, or at least those who are typically blamed for either its success or failure. Best Director often lines up with Best Picture, although that's certainly not always the case (Argo [2012], of course being the famous recent example of a Best Picture winner without a nomination in this category). And with the DGAs and BAFTAs in the can, we have a clearer idea of who might win this. Who are we kidding, there's no telling. That's the fun part!

Bennett Miller has been behind the helm of a few prestige-style flicks that have been pretty Oscar-friendly, such as Capote (2005) and Moneyball (2011), although neither of these films actually won much besides a Best Actor win for Philip Seymour Hoffman. Most of the buzz around these flicks didn't really involve the director, even though Miller was previously nominated for Capote. Still, it's not like there's a feeling he's due or anything and Foxcatcher is starting to look like another Moneyball - a well-liked, highly nominated film that will walk away empty handed.

I have never heard of Morten Tyldum before, but he's actually been pretty successful in Norway. There is nothing exceptionally special about the direction of The Imitation Game, at least in any sense that elevates it outside the realm of your typical historical biopic. That's sort of exactly why he's nominated, though, because the Academy nominally loves this stuff. In a year where other artists made some stunning directorial work, though, it's all the easier to ignore him.

This could be a sly pick, because even though this is only his first Best Director nomination, there's a general sense of "How the hell is this Wes Anderson's first Directing nomination?" The Grand Budapest Hotel is also gaining steam, although perhaps not as much as Birdman lately. Then again, there's the common dismissal of Anderson by the Academy and his specific and particular style has never really won over voters. Maybe he's getting to the point where people are understanding what he's been trying to achieve and peers are appreciating his work. Unlikely, but again, would not necessarily be surprising.

One of the greater moments leading up to the Oscars is right here - it's actually looking like a bit of a battle for Best Director! Iñárritu has wrapped up the Golden Globe and the DGA and is actually looking like a decent lock. Of course, Linklater just got the BAFTA, and is leading a lot of the critics circle award tallies. Obviously the directing for both is a tremendous feat from logistical standpoints, and part of the great irony is year is how both these films are on the opposite spectrum - a 12-year passion project vs. a single-take film. It ought to come down to who impressed the Academy more, and I might call Iñárritu's work the higher achievement, but I think Linklater just has the greater support right now. 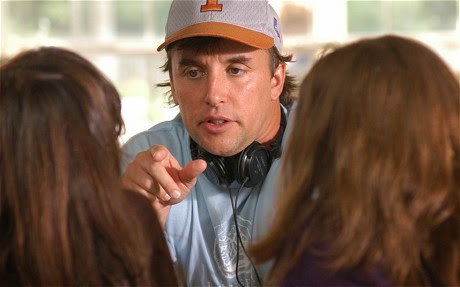 Linklater has built up a nice career that many people respect and just like Wes Anderson there's a definite "Why has he never been nominated?" vibe going on. Birdman has ended up being weirdly divisive which may be its downfall on February 22nd. Boyhood is by far the safest choice, although it is a fallacy to believe that the Academy always makes safe picks, after all, they sided with Ang Lee's Life of Pi (2012) over Spielberg's Lincoln (2012). Birdman is weirdly surging and Iñárritu is favored in the precursors, but when it's split like this, some predictive award has to be wrong, and the DGA/Globes tend to be more wacky than the BAFTAs/Academy Awards. Who knows. I still feel like this is Linklater's to lose, but he could very well lose it if he's not hustling his ass to get those final votes off this week.