by Roderick Allmanson at precisely 12:16
Welcome again to our look at the best and greatest bits of pop culture to come out of the year 2015, which will soon be known as one of the greatest years in all of human existence. I actually might suggest that this year's movies weren't nearly as great as 2014 and its albums don't really hold a candle to 2013. Nevertheless, the important thing is that the year has ended, so we're still going to talk about this crap.

We'll recount all the year's best songs after the Holiday, for now let's go through Records and Videos:

Top Albums of the Year: 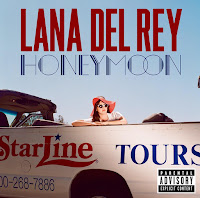 I always like separating my artists into three big genres that cover everything - Pop, Rock, and Hip-Hop. Every music ever is derived from those three big monster genres. This was an alright year for all three, although more seemed to come from Hip-Hop than anything else. On the pop side, though, there wasn't a more intoxicating album than Lana Del Rey's Honeymoon. It's creepy, ethereal, addictive, and I dare say even catchy at times. She continues to grow as a pop artist who seems entirely disinterested with fitting into cultural or musical expectations, unlike say, Fifth Harmony which always gives me the vibe of a completely manufactured act.

Runner Up: A lot of people would probably say Adele's 25 but that never did it for me. The stunning debut of The Weeknd, Beauty Behind the Madness which feels more like a greatest hits album because every single song feels like it could be a Top 40 single. 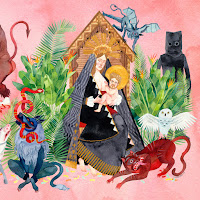 I was torn a lot listening to a few albums, but I ultimately settled on a more obscure record, I Love You, Honeybear by Father John Misty. The first track is a big ballad that hits you like a mix of sweeping folk with ironic sentimentality and the album never lets up. Each song gets more engaging than the one before it, essentially a romantic record that's stooped in enough casualness and even bits of social commentary to keep the whole thing entertaining. It's a compelling record that pushes the genre forward and is probably my favorite album to chill out to this year.

Runner Up: The other two best albums this year dropped from more established artists, although one hasn't put anything out in twelve years and the other is still the freshest voice in Rock. Blur came back with The Magic Whip which really made me yearn for another Gorillaz album. The next is the successful follow-up to their break-out debut, Alabama Shakes' Sound & Color, which improves on anything they've ever done. 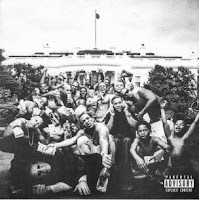 My and also everyone's pick for Top Album of the year, naturally is Kendrick Lamar, To Pimp a Butterfly. I listened to this record non-stop from its debut to...well, I still am. He's not only become one of the most lyrically complex rap composers but his ability to switch personas with ease evokes Eminem or Nicki Minaj. The beats are infused with a high level of funk this time around while even his top tracks are infused with the pain and angst of de facto segregation and life on the Compton streets not heard since NWA. Fitting that this was the year of Straight Outta Compton (2015) and an increase in general awareness of Black Lives Matter, but the main rub of it all is that this isn't that different from what Cube, Dre, and E were dropping nearly thirty years ago. I wonder if we'll have a landmark album in 2032 rapping about the same thing.

Top Tracks: "King Kunta", "These Walls", "The Black the Berry"

Runner Up: There were a lot of rappers that landed this year with a lot of noise. We'll probably remember 2015 as a landmark year for the game changing with Fetty Wap, Future, Chance the Rapper, and Rae Sremmurd leading the charge. I'll give the edge to the latter, though, whose SremmLife is a glorious exultation of the new wave. I'll also slide in At. Long. Last. ASAP by ASAP Rocky who is also proving his ability to craft some of the most sultuous beats and smooth rhythms in the game.


Top Videos of the Year:

Was there a music video more widely imitated, discussed, loved, hated, parodied, or marveled at than Taylor Swift's "Bad Blood"? No. Was it the best video of the year? Also no. "Hotline Bling" is much of the same deal. I would have thought that Macklemore & Ryan Lewis' "Downtown" would have the same effect, because I'm still stunned by the grandiose marvel of that piece, although I feel like everyone hates that song and no one gives a shit about that video. That's still bizarre to me.

For novelty's sake I actually dig Lil' Dickey's "$ave Dat Money" for being a pure goofy parody of rap videos yet simultaneously emulating their style on a budget that fits the song's conceit. It's a great piece of both homage and satire.

Not to be stuck on Kendrick too much, but he did put out three videos that could all easily be the top of the year. "Alright" is the obvious choice for artistic merit, but something in "King Kunta" draws me in every time it's on. Maybe it's the limited cinematography that resembles a cell phone camera with Dutch angles, yet has incredible depth of frame. Maybe it's the strong sense of community he gets from Compton. Maybe it's the idiosyncratic dance moves and hunched troll dancing that would seem weak and meager yet appear fierce when accompanied by Kendrick's stellar lyrics.

But I actually love "For Free?"

Mostly because it goes for the really weird all the time and also features a unique role reversal between Kendrick and the anonymous ho on display here. Juxtaposed between this silliness is an intensity fueled by American racial tension, slavery, and haters. It's a wonder to behold. Plus, this.

Best Music Video of the Year: "Elastic Heart" by Sia

I've been waiting almost a year to gush about this! Don't drop your videos in January! Sia continues with similar motifs and actor Maddie Ziegler but adds Shia LaBeouf in somehow his best role ever. It's all interpretive dance and you can read into what their struggle represents any way you want, which is in part what makes it so excellent. It's a purely visual digression on the subject of love, power, lost hope, imprisonment in cages of others' or our own making, and finally a freedom that comes natural to some but impossible for others. It's tough not to choke up at that last moment when the girl can't pull what I'd interpret to be her father out of the cage, only to watch him be trapped forever while she's able to go free. Also "Elastic Heart" is Sia's best single.

What do you think about the Recs and Vids for the year? Are you a "Bitch Better Have My Money" or "WTF" person? Let's throw down