by Roderick Allmanson at precisely 17:36
This is the ultimate moment for every film fan - the infamous Top Ten List. In years past I have done this many different ways. It's always helpful to look back and re-examine films that have drifted up or down depending on cultural significance or long-term impact. I'm a big believer that these lists are fluid and require constant updating. Or at least updating every couple of years as tastes change and we realise that films we fell in love with upon first glance actually suck a few years down the road.

Here is my original 2014 list, which is still largely solid. But here's where I'd update things:

In general I consider this a reflection of the films I personally have dwelled on the most in the past year rather than films like Interstellar or Guardians of the Galaxy that may have been more culturally significant. So let's get into 2015, obviously following this protocol: 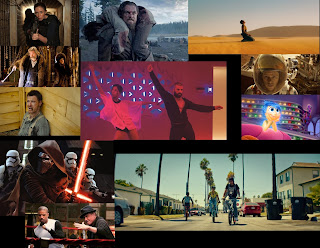 I was debating between these two and then I realised it was hilarious and awesome that I was touting this random obscure indie western alongside one of the biggest films of the year, so I'm already breaking a rule and just lumping them together. It'd be great, actually, if Slow West had TFA's breakneck, enthralling opening instead of a boring roll-out and TFA had Slow West's personal, ironically tragic ending that elevates all that came before it instead of wholly dropping like fifteen characters' stories.

Director David Villeneuve in a relatively short mainstream career has suddenly amassed a reputation for bringing the most out of great actors in the grimiest films this side of David Fincher. His astute direction is aided by the best working non-Academy Award winning cinematographer in the business, Roger Deakins, and Josh Brolin, Benicio Del Toro, and especially Emily Blunt at the top of their game. The film ruthlessly builds and draws out tension, to the extent that I wonder if it will hold up after repeated viewings - or like other Villeneuve films if you can even get through repeated viewings without becoming clinically depressed.

It's almost weird that Inside Out has completely overshadowed Pixar's other effort, The Good Dinosaur this year, possibly due to the tough task of marketing two films over six months, but I'd say it's because Inside Out is really good and The Good Dinosaur is just okay. There's no other film this year, animated or otherwise, that rips your heart out of your chest, tenderly kisses it, then smashes it on the ground. It's an emotional ride, even if the premise is merely a Herman's Head update, whose stakes are the smallest of the Summer but somehow feel bigger than any other blockbuster this year.

Finally, a pleasing return to good moviemaking by Ridley Scott, whose career by this point has had far more misfires than sure things, despite the legendary films to his credit. His traipsing of genre is underrated and he finds great balance in The Martian, undercutting hopelessness with humour and more science than fiction that's inspiring to budding young astronomers everywhere. Even though it shares half the cast and all of the pro-NASA enthusiasm of Interstellar, its inherent light-heartedness translated into a crowd-pleasing, box-office dominating event of the Fall. That's of course not a bad thing at all, which resulted in the most charming film here.

I'd have never predicted listing this film here, and although it's actually exactly like the first Rocky (1976) it actually sells its story a bit more coherently, and dare I say it, Michael B. Jordan is even more fun to root for than Rock himself. Stallone provides a moment of unparalleled humility by not throwing a single punch and not even picking up any Gatling guns to kill Eastern Europeans or Cambodians. He's had a string of terrible movies - it's nice to remember he can actually act, even if the last time he did that was actually 1976.

No movie tackled modern issues of racial judgment better this year, and in addition to spinning stereotypes, expectations, and temptation in ways that seem fresh rather than preachy, Dope is a really funny ass movie. It's bristling with excellent character work, a charming young cast, and one of the best soundtracks of the year.

The latest in Tarantino's middle period (late period?) follows a dream cast of actors who have filled his previous seven films and an acerbic wit penetrates his uncommon wild winter western. It's bristling with violence and attitude, as is most of his work, but it's his penchant for going smaller rather than larger with each consecutive film that gives this its edge (okay, Django Unchained [2012] was clearly his epic tome). Always full of surprises, from its twisting plot to its Glorious 70mm distribution that's simultaneously pure and erudite, The Hateful Eight proves that it's getting really really hard for Tarantino to construct a faulty movie.

So, what do you do with an Oscar in your pocket, at the top of your game and widespread critical acclaim? Do it again! Alejandro González Iñárritu, whose name I always have to look up before typing it, pushes cinema forward again with the brutal in every way Revenant. I don't care as much about Leo's or Tom's Oscar chances, but I do care about the unrelenting story, bravado filmmaking, and the totally assured third win in a row for Emmanual Lubezki's cinematography.

Fury Road has topped plenty of end of year lists, and when you get down to it, it's legitimately really hard to look back on it and name anything better. It's pure visual storytelling on the grandest scale ever, matched with a truly insane mind from renegade Happy Feet (2006) director, George Miller along with every single actor bringing their A game, including knowing when to go over the top and when to go more subtle. Every scene is pumped to the gills with clear and purposeful action, but there's also an impeccable rhythm to everything that somehow keeps the characters grounded no matter how outlandish they may be on the outside. This is the film that showed us that every single other blockbuster film ever made is not nearly trying hard enough. It didn't actually gain the financial traction of some other summer films this year, but looking back on it six months out, can you name anything better? Or even memorable?


I feel like this was a trendy pick when the year was young and as a ton of other films have came and went, I don't think it's been topped. It's all at once an intricate character study, a bottle episode, an engrossing mystery, a Frankenstein tale, and a look at what it means to be human, even though its most human character is full of wires and powered by Google. There are scenes of humour, tension, anger, pain, relief, and an uneasy friendship / mentor relationship at the core of a story about a boy and a robot where love is all a deception, if there could even be love. There's a lot here and it's all executed with as much precision as its leads would enjoy.

Crimson Peak Guillermo del Toro goes small with an enticing and gorgeous gothic ghost movie.
Beasts of No Nation Bleak and brutal, but more importantly and hopefully, a total distribution shift for Hollywood.
Straight Outta Compton The hip hop biopic we needed with enough attitude to remind us that we haven't come far at all.
Carol I don't really care about this period piece and haven't seen it, but apparently the acting will change you life.
The Forbidden Room You need to have the occasional super-insane foreign movie here to make you seem smarter for "getting it" when it's totally just whatever the director thought was funny.
The Duke of Burgundy Ditto.
Queen of Earth I love the super brutal emotional assault in a situation that shouldn't escalate so drastically.
The Big Short Adam McKay is really really into checks on the powerful people who secretly run the institutions of this country, and puts enough humour into his work to make it palatable.
The Voices So many people hate Ryan Reynolds and this film got no love, but he displays crazy range here and it's totally the best lovable serial killer comedy of the year.
The Final Girls A modern-day Cabin in the Woods (2012); the most meta movie of the year, full of great horror and comedy.
Zombeavers Ditto.

Well, that's it for the year. What's your Top Ten?