What is up with Angie Tribeca?

by Roderick Allmanson at precisely 11:15
Tomorrow we see a once in a lifetime television event, albeit one that's somewhat misguided. For reasons that generally escape me but I'll try to explore here, TBS has decided to premiere its new absurdist comedy show, Angie Tribeca in a massive 25-hour block marathon without commercials.

You're probably thinking the obvious - this is a shameless ploy to emulate Neflix viewing habits on broadcast television. Dumping a ton of content at once accomplishes exactly that, although the play is bizarre. Presumably, these episodes are thirty minutes long, which means the 10-episode season will complete in 5-hour blocks, which makes the 25-hour span make a little more sense. Supposedly the show is also procedural, which means viewers can tune in and out whenever they want. 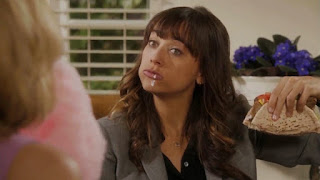 This all seems like a marketing guy's really good pitch. The show comes from Steve and Nancy Carell, who while being two very funny people, certainly aren't known for their producing work. The big name here is Rashida Jones who seems to be going for full-on zany, which is a rare turn for her who's usually a lot more subtle. I'm all for it. The target seems to be every USA Network show ever (until recently), which is also ripe for parody.

The problem, though is that TBS's effort seems to be emulating the marathon-ing trend of show watching, but neglecting the more popular reason why Netflix is taking off - choice. Angie Tribeca still relies on people tuning in at a regulated start time (if only at least on the half-hour mark), and declines the option to choose the episode to watch. It's also tricky if an episode or two in the series is skipped, suddenly you have a five-hour wait on your hands.

Don't get me wrong here, I'm definitely tuning in today, and that alone has probably made their gamble worthwhile. Still, I would have totally tuned in if it was dropping Tuesday night at 10 pm. Supposedly a more traditional roll-out will commence starting with the "second" season, which is set to drop January 25th. So like...next week. That's assuredly a having your cake and eating it too situation, which is fine, but also reeks of an attempt to pander to new viewing styles without understanding why it's popular.

Angie Tribeca is on right now - are you tuning in?