Against the Crowd Blog-A-Thon 2018

by Roderick Allmanson at precisely 10:42
We here at Norwegian Morning Wood are always very excited to jump in on someone else's great idea, so here's our First Ever participation in Dell on Movies' 2018 Blog-A-Thon. 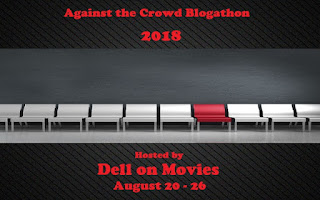 Here are the rules, as per that site. I should note that I was turned on to this by the blog, Surrender to the Void.

1. Pick one movie that "everyone" loves (the more iconic, the better). That movie must have a score of 75% or more on rottentomatoes.com. Tell us why you hate it.

2. Pick one movie that "everyone" hates (the more notorious, the better). That movie must have a score of 35% or less on rottentomatoes.com. Tell us why you love it.

3. Include the tomato meter scores of both movies.

4. Use one of the banners in this post, or feel free to create your own.

5. Let us know what two movies you intend on writing about in one of the following ways:
Comment on this or any ACB 2018 post on this site
Tweet me @w_ott3
E-mail me: dellott@yahoo.com

So, let's get into this. My choices were instantly easy, because I just saw a movie that was highly recommended to me that I thought I'd love but I hated and there is of course the old staple that I love that no one else does.


I enjoyed every single actor and crewmember involved in this and was pretty excited to watch it for the first time in the year 2018. Totally late to the party, but hey, I acknowledge that, and I sat down to enjoy some great Russian gangsters. A few weeks later I'd struggle to even recall the plot to you. It's all over the place with a large amount of characters that wouldn't be a problem, but tend to be able to stand in with each other. It's a sprawling, multi-decade narrative puzzle that never quite comes together, but it's really hampered by having no one character to anchor the film. Is it Viggo? Naomi? Anyone else? Every character feels on the periphery of their own movie.

Maybe that's the point - creating a world that we get as lost in as the characters. It IS Cronenberg and we shouldn't necessarily expect a traditional narrative, but I did not care about what happened. There are some great scenes of tension, especially in the first half, and the naked sauna fight is some spectacular choreography. Other than that it feels like a big MacGuffin race that never pays off.


You know that I always appreciate moments to rant about how much I love The Lone Ranger. This is the kind of movie that popular nerd crowds always want out of a blockbuster. It's bombastic, clever, politically intriguing, has a strong message, doesn't care about Hollywood rules, and doesn't have any superheroes in it. Yet it's reviled.

There's this public domain aspect that Patrick H. Williams just critiqued better than I ever could. He essentially says what I've been hammering for years - that even though these properties have superficial name recognition, no one actually knows or cares about the historical narratives associated with them. We don't need a gritty revisionist Lone Ranger when no one can remember the last Lone Ranger and why this would be new, different, or we should care.

It's easy for me to get past all that. I don't care about the cultural context, although if you read this site, you'll know that's integral to our greater relationship to a given film. All this texture got in the way of text with The Lone Ranger and we ignored what should have been a riotous good summer blockbuster. It's iconic, fun, exciting, full of important stakes, epic in every sense of the word, and leans on the William Tell Overture with aplomb. I've ranted in much more detail over the years, so check that out if this is your first time snooping around here.

This was fun - feel free to scrooch and spread this on your own site for the Blog-A-Thon! And read Dell on Movies and Surrender to the Void!

Labels: Movies, The Lone Ranger
Email ThisBlogThis!Share to TwitterShare to FacebookShare to Pinterest