Twenty GREATteen: Best Films That I Saw, Regardless of Year

by Roderick Allmanson at precisely 04:16
We have a couple weeks left to go in 2018 but I'm not sure any film I see will crack this Top Ten, so here we go.

Each year in addition to our traditional end of year lists that every website ever makes, we take some time for personal evaluation of any and all movies seen for the first time in the Calendar Year 2018. We've been at this for a while now, and it's more a cool motivation to think critically about all movies you watch, catch up on some old ones that you've never seen, and for you, the viewer to gain some insight into my madness.

And, because I'm insane I also did this at the mid-year break. To be fair, without looking at that I made the following list, and amazingly, I kept five of my top six, in roughly the same order.

So, regardless of year, let's dip into the Top Ten of 20GREATTeen. I just copied this from the mega-list, we'll keep the method of viewing because that's always interesting. Also, sign up for Netflix DVD service. 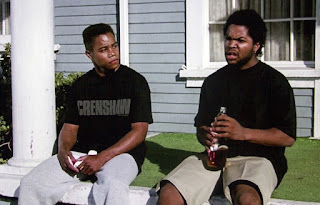 Why It's Here: When you watch upwards of 240 movies a year what matters most by December is what stands out. This was the first of a wave of early 90s Ghetto films that have never really stopped, but it's still the best. The cast is a who's who of 90s Black Actors, most of whom have become great 2010s Black Actors like Cuba, Angela Bassett, Ice Cube, Morpheus, Morris Chestnut, and Nia Long. It tightens its grip on your and never lets go, while never necessarily fetishizing, glamourizing, or exploiting hood gang violence like it easily could have.

Why Did I Watch This? This had been in my DVD queue for a while because it's just a notable movie, but certainly riding that post-Straight Outta Compton (2015) wave of gangsta films my interest was peaked in seeing something a little more authentic and focused. It also clued me into a lot of 90s references, from Eek the Cat! to Don't Be a Menace to South Central While Drinking Your Juice in the Hood (1996).

Why It's Here: Okay, this is a divisive movie that most people hated, but I think it's bloody brilliant. As soon as I realized the whole thing was a parable I was super on board, sussing out the layers of metaphor. The final fifteen minutes is one of the most amazing tour de forces of cinema I've ever seen. There are few who agree with me.

Why Did I Watch This? All the controversy, insanity, and hype, both negative and positive, coming off the recent release the previous Autumn.

Why It's Here: There are a lot of "night gone bad" movies out there, but few with such immediate and visceral action and reaction as Good Time. Robert Pattinson has done incredible post-Twilight work just about everywhere and he endures nonsense here from beginning to end as his character can't quite shake the criminal he is at heart despite being pulled in tragic other paths of family, poverty, and neglected redemption. It's really engaging stuff.

Why Did I Watch This? It showed up on a lot of Best of 2017 lists, but what pushed me over the edge was Pete Davidson just LOVING this movie. He knows his stuff. 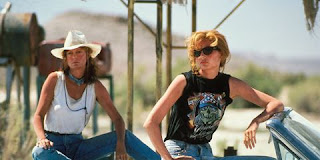 Why It's Here: The great irony of this movie is that it's totally a fitting movie for 2018 yet you get the sense that it would never be released in 2018. I weirdly watched a solid number of Geena Davis movies in 2018 (I think three of them, two are on this list). This movie just kept unfurling and I was awestruck how spot on every single line of dialogue was for a film made nearly thirty years ago. It was really depressing. This movie was crazy popular, too! It was a film that has etched itself in pop culture lore and well worth catching up on.

Why Did I Watch This? At the time it filled a niche both on expiring soon from Hulu and me needing a 1991 movie to fill one film from every year. But that could have been any film - from my more familiar Simpsons knowledge to the definitive relevancy, this was a good pick.

Why It's Here: I miss witty, conniving comedies so much, and this was the wittiest, most conniving comedy I've seen in a long long time. Consistently hilarious, dark, brutal, timely, and really well-shot, this just hit all the right buttons for me. Armando Iannucci is a masterful screenwriter, but I also feel like this film isn't getting nearly its just dues come December. I watched it and knew it'd immediately be at or near the top of my 2018 list.

Why Did I Watch This? I had heard about the production years ago and it seemed interesting, then got far more interesting when I learned it was a comedy. The trailer sealed it for me, a local theater was playing it, and there we go.

Why It's Here: I knew I'd fall in love with this. Similar to Death of Stalin this is right up my alley with its dark but clever humour. That's always the key - this film gets outlandish, more outlandish than just about any other movie I've ever seen, but the satire is always purposeful, stuffed with metaphor and relevant. It's uncanny. The cast is full of hot young actors from LaKeith Stanfield, who should be in everything, Steven Yeun, to Tessa Thompson who WAS in everything this year, and Armie Hammer, who I think is the most underrated actor in anything he shows up in. Did I mention how nuts this film gets? It's best not to spoil anything and let the magical realism take you in.

Why Did I Watch This? The trailer really sealed the deal, but knowing LaKeith from Atlanta and Get Out (2017) and Straight Outta Compton (2015) helps. Also Boots Reilly from The Coup as director was really intriguing. Mostly I heard this film was bonkers and it reliably was, which made me happy.

Why It's Here: This is a truly epic piece of filmmaking. There is hardly another film made that captures an entire generation of an entire city in two hours, but City of God destroys all competitors. I give the film a tremendous amount of credit for introducing dozens of characters played by unknown or even non-actors but imbuing all of them with a personality, function, actions, and reactions that reverberate throughout the city and the film itself. The protagonist may not even be the main character. It's a fantastic achievement.

Why Did I Watch This? I heard about this film years ago but didn't know much about it, only that it was notable but I think I read it in a big 1001 Movies to Watch Before You Die book, and it also helped me get a 2002 film. Netflix Streaming helps. 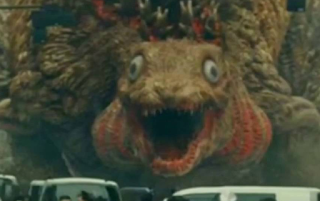 Why It's Here: In the wake of a long span of time with no Godzilla, and then a lot of spins on the Kaiju but no real innovation, Toho decided to completely reinvent their own creation. We've had the American version - Godzilla (2014), which was by and large pretty good, the animated Godzilla: Planet of the Monsters (2017) which is nigh unwatchable, and sure, let's through in the Pacific Rim movies to round out our recent Kaiju splurge. But no film was as flat out excellent as Shin Godzilla, which recrafts the Godzilla mythos into a disaster relief film in the wake of Fukujima. Godzilla is weird, deathly, and truly terrifying. His atomic ray is purple and shoots out of his back, tail, and a horrifying separating jaw. The human drama is actually compelling and casts a critical eye on Japan-US relations, self-reliance, relief, and prevention. It's top to bottom amazing and far beyond any mindless Kaiju Beat 'em up. Okay, I'm still looking forward to Godzilla: King of the Monsters (2019), though.

Why Did I Watch This? I heard it was good a while ago, and wanted to catch it, especially after watching this video essay. It was also October and I sorta justified it as a Halloween Monster film.

Why It's Here: Yeah, this is an obscure one. It was actually nominated for nine Academy Awards but only won one. It is truly a bizarre film, taking place almost solely in a brutal 1000+ hour long dance competition in the Depression Era, when people were just desperate enough to submit their minds and bodies to grueling spectacle for a quick buck. It's a real bleak film full of madness and despair disguised as a fun romp. It's precise, the acting is sublime by Jane Fonda, Gig Young, and many more, and you feel every bit the pain they go through until it becomes a meaningless exercise as futile as their misguided hope was in the first place. It's rad, man.

Why Did I Watch This? I forget how I got into it, but there is this weird sector of old entertainment of like, people putting hands on cars the longest, or dancing the longest and the insanity that ensued. It's a weird forgotten corner of our pop culture history. Also that Always Sunny episode. I think I just saw the title of this on a Wikipedia list or something and thought, "Damn, that's a weird title." It is and damn it's brutal. So metal! But I like exploring these subaltern, forgotten zones. Also, this wasn't even available on Netflix DVD for the longest time, I had to literally wait years. 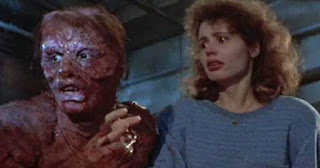 Why It's Here: It starts perfectly in media res, has an incredibly focused and limited cast of characters, believes in science, hubris, love, regret, body horror, it's so good. In 2018 Geena Davis' boss / stalker coming to save her is troubling, but the film works out that he gets some pretty rough comeuppance and she ends up being her own hero. Then again, this is a film without any real heroes - only complicated characters full of dreams, danger, and gross acne. From the slow transformation both physically and mentally to the doomed love story, this is a brilliantly constructed screenplay. Could have used a monkey-cat though.

Why Did I Watch This? I'm a big Goldblum fan and the pop culture relevancy of this is strong. Again, mostly Simpsons tho that's mostly the 1958 version. I watched this pretty recently because it was leaving Hulu, and I knew it'd be good, but damn I was blown away.

What did you watch this year? Am I too big on The Fly? Bet you didn't see that one coming.