by Roderick Allmanson at precisely 19:23

Well folks it's the most exciting time of the year! All year we painstakingly catalogue every single movie and TV episode I watch and it's all for this. The big sum-up of my personal viewing habits. To read the whole big list, you may click here. For our insane stat breakdown, keep reading!

So, let's begin by going through some basic numbers. I managed to watch a total of 182 movies this year. I started with John Wick 3 (2019) and ended with Star Wars: Attack of the Clones (2002). This is down from years past, but I knew this going in. Of these 182, 110 were first-time viewings, or 60%, which is actually down slightly from the past two years, but still significantly higher than from when we first started keeping track of this. Here is a graph.

We can see that my streaming viewing has gone way up. This is exciting real-time analysis of shifting viewing habits, folks. Theaters were obviously down because of Corona - the two I saw were Rise of Skywwalker (2019) in early January and Bloodshot (2020) in a drive-in. My TV viewings have also dropped precipitously, mostly because I no longer own a TV. That's still there just because I was counting it since 2015, but it's probably good to be axed. The other big movie source is DVDs, but Streaming really is king right now. Let's look at all media! I was surprised that Netflix still reigned supreme. I watched many more streaming services than ever this year. In 2019 I was 34% Netflix streaming and 20.5% Netflix DVD. My Hulu percentage actually decreased pretty significantly, but if you add up Hulu as well as the HBO Add-on I got, it bumps up by about 25%. Needless to say, I splurged for that to catch up on tons of HBO shows during Quarantine, which then segued into an HBO Max account. Disney+ was up, of course, but that's also because I only really had it for less than a month in 2019. Other services - YouTube, Amazon Prime, Kanopy and miscellaneous other streams remained pretty steady.

HBO was kind of interesting - I thought it worthwhile to note that in addition to the two movies I watched on the straight-up channel, merging HBO Max and the Hulu Add-On gave me 31, or 17%, which pushes them barely into third place. Say what you want, I kind of dig HBO Max, folks. 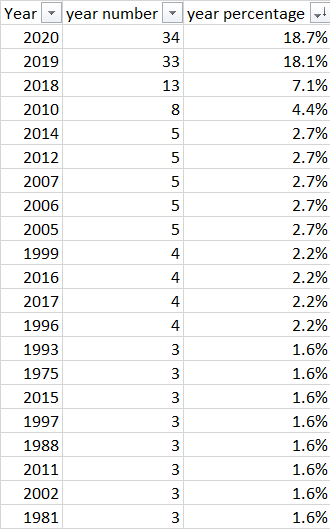 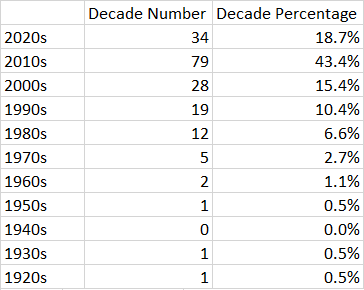 The big change of course is that we have a new decade now, so obviously the 2010s took a hit. All other decades, from the 2000s to the 90s, 80s and lower were relatively stable from what they were last year.

Obviously I don't keep track of the months movies were released that I saw (but I should start doing that), but I do have a nagging need to file each viewing in chronological order separated by month. Again, it was clear that I wasn't going to push this year like years past, and no month broke the 20-movie barrier. The champion was May 2020. I closed out the year in a remarkably steady rhythm. My numbers were low this year, and every year I'd like to get them up. However, I honestly also think it's probably detrimental for my mental health and not totally how I'd like to spend so much of my time and energy. I think I struck a good balance this year. I'd always like to see more older films, and even the 1970s movies I watched was like...Gator (1976). We can always do better. It's just about finding the balance!