Oscar Zone V: I was wrong.

by Roderick Allmanson at precisely 15:51
Well, I hope all of you out there are nursing some comforting Oscar Hangovers, but it's time to wrap up Norwegian Morning Wood's really sketchy Academy Awards Coverage. Over the past few days I've looked deeper into some topics, mostly complaining about AVABAR (2009), which ended up losing any important award, so naturally I'm overjoyed.

What follows is a revision of my original predictions. To refresh your memory, RED were nominees that I thought WOULD WIN. In BLUE were the noms that SHOULD HAVE WON. PURPLE means I thought the deserving nominee would win. All these remain on my list but in addition GREEN represents the actual winner. Got it? Nope? Good. I ended up pretty split, 12/24, but I'll note I called every acting, directing and Best Picture, screenplay really rocked my world. I consider that category a total oddball award now, the past three winners include Juno (2007), Milk (2008) and Precious: Blah Blah by Sapphire (2009). Without adieu, here we go:

Best Performance by an Actor in a Supporting Role

This was my first indication that The Hurt Locker would have a big night. It wasn't going to be a one-and-go kind of Best Picture, it would sweep or nothing, like Slumdog (2008) before it. Cheating Big Q out of what I thought would be an easy award for him was the first step.

The little clip of Logorama shown right before it won pretty much convinced me this was justified. Haha, definitely the first time I had seen any of these films. I mean, c'mon, where am I going to go see fucking French Roast on a Saturday night?

Music by Prudence (2010): Roger Ross Williams, Elinor Burkett
Cool. I guessed in the dark and failed. Let's move on.

The New Tenants (2009): Joachim Back, Tivi Magnusson
Same with Animated Short, the three seconds of The New Tenants was definitely the coolest and I even recognized some actors in it. Should have called this one right with some research. But fuck that, we don't believe in research here at Norwegian Morning Wood.

I was pumped to see this. Big blockbusters are usually nominated for things like this and lose. It shows that Trek really was a slight level beyond the normal idiotic summer fling. Even if it was just Makeup. I will note at this point that Stiller was the single best moment of the past ten years of Oscar.

Take a break and look at this thing: 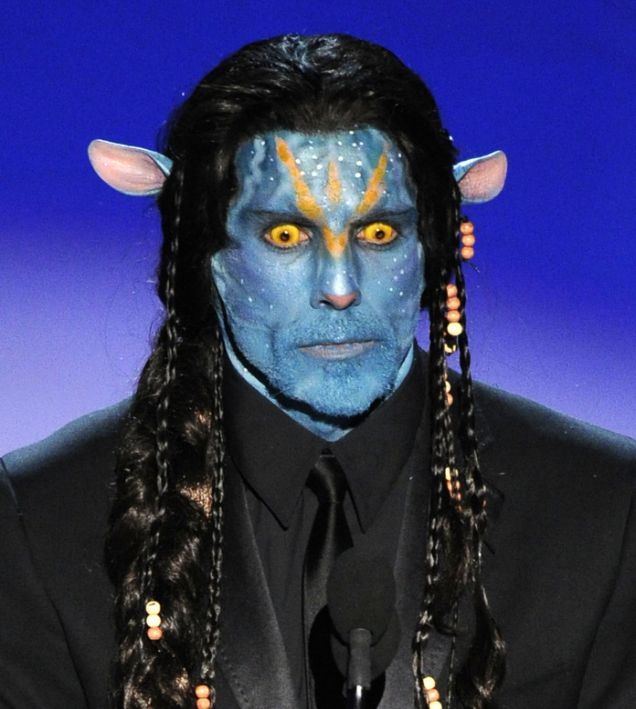 Best Writing, Screenplay Based on Material Previously Produced or Published

Precious: Based on the Novel Push by Sapphire (2009): Geoffrey Fletcher
Up in the Air (2009/I): Jason Reitman, Sheldon Turner

Probably the most surprising award of the night, this should have been D-9 or Up in the Sky's award outlet but instead Precious snatched it up. It's pretty notable that such a small, crum-riddled film walked away with some significant awards. Then again, when the film has its source material explicitly shown in the awful, sentence long title, I guess comparisons with the source is too inevitable. Or something. I don't know. Hooray for blacks here, they couldn't nab the Director Award.


Best Performance by an Actress in a Supporting Role

Mo'Nique for Precious: Based on the Novel Push by Sapphire (2009)
No shit, this was easy.

The Young Victoria (2009): Sandy Powell
I was kind of disappointed here, apparently this was that chick's third costume Oscar, apparently she rules. I didn't think The Young Victoria was notable at all beyond any other typical 19th-Century-Whatever, but then again, those kind of flicks always win Costume Design. I probably could have seen this coming, actually.

More on Hurt Lock's roll to the top. The sound timing is sweet I guess, I've never really had the ears to tell what makes one film over another in this one.

Michael Bay will have to bide his time until Transformers 3: Shitfuck Express (2011) to get that Oscar, along with the 16 others he's due.

This was probably the only important award that AVABAR won and congradu-fucking-lations, apparently Cinematography is now the Academy's dumping ground for really really good blockbuster-type films that don't really deserve a significant amount of other awards and naturally the 'BAR abides.

Up (2009): Michael Giacchino
This took me for surprise, listening to the montage I found myself really only able to remember Surecock's Score as it was playing, which should be a sign that it was really the only memorable nominee, but whatever. It's a good credit to Animated films both that Fantastic Mr. Fux and Up were nominated and Up won.

Haha! I don't know how I called this.

The Hurt Locker tended to win every category I thought AVABAR would take but another film deserved. I'm going to take some credit and say I was almost half right, in that AVABAR deserved less than half the awards it was nominated for, but I just missed the film that should have righteously won. Apparently, it was Hurt Lock every time.

Best Performance by an Actor in a Leading Role

None of the acting categories were even close, but this one in particular I think could have gone to about anyone. Glad it went to Jeff, though.

Best Performance by an Actress in a Leading Role


Kathryn Bigelow for The Hurt Locker (2008)
James Cameron for AVABAR (2009)
Lee Daniels for Precious: Based on the Novel Push by Sapphire (2009)
Jason Reitman for Up in the Air (2009/I)
Quentin Tarantino for Inglourious Basterds (2009)

Best Motion Picture of the Year: