Profiles: The Machismo and Queermismo of Gerard Butler

by Roderick Allmanson at precisely 18:20

Yeah, it's a word. Anyway, today, with this weekend's release of The Bounty Hunter (2010) I'm taking a look at the recent career of one of our greatest Chameleons, Gerard Butler. Just look at that mug: 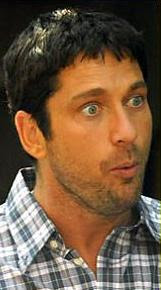 Right. Anywho, from what once was probably the most potential action career of any actor in the last decade, Mr. Butler seems moreover now regulated to the banal romantic comedy. To the ire of nerds and ab-lovers everywhere, Mr. Butler is now often with a shirt on, wooing some Hollywood Starlet who long ago convinced viewers she was funny but has never really proved it. Let's take a look at this dual path of extreme macho acting and wussy foo-foo acting capitalized by Mr. Butler:

Days as "That-Other-Guy-from-Reign of Fire":
One of his first roles in a bigger, kind-of action film was Dracula 2000 (2000) as the eponymous Vamp. The casting is terrible (what is it with Modern Dracula movies and their miscasting?), his acting is inconceivably bad and the entire premise is really mishandled. It's a good general rule that any film or show from the turn of the century that employed "2000" in its title is torrid. C'mon, even at the time some people were on top if this.

Anyway, after this he was known in a few other big action films, often in small wiener roles. He doesn't do much in Lara Croft Panty Raider: Cradle of Life (2003) and even less in Reign of Fire (2002), but he had a certain charisma that hinted at leading man potential. Then we have The Phantom of the Opera (2004), which for some reason I remember as the only good movie coming out this weekend, although looking back there were clearly some good alternatives, I'm not sure what the hell we were thinking. Anyway, Mr. Butler at this point had amassed a pretty good oeuvre of smaller, crappy action/horror films. He was like Christian Bale before he really broke out on to the A-List with Batman Begins (2005), just enough of an unknown to the wide public to be a popular casting for any kind of franchise role, but credited enough to pull it off. 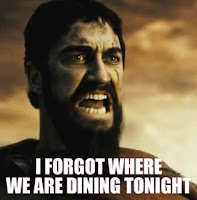 So he's in total shit until that cloudy evening in March 2007 when 300 debuted, shattering expectations for March releases, graphic novel adaptations and troubling cultural gender issues. It was the kind of instant-A List action hero maker that only comes along once every couple years. The film works mostly because of Mr. Butler's utter commitment to manliness, assholery and snarling. He also single-handedly generated some of the most irritating memes of the last quarter-century. Truly some significant achievements, at this point he had most of the male population of the United States eating out of his balls.

This is where his career starts to dovetail. Evidently showing off such abs not only got the attention of fanboys, but some ladies as well. On the action path he followed up the epicness of 300 with forgettable adventures in RocknRolla (2008), Gamer (2009) and Law Abiding Citzen (2009), three movies which have admittedly each increased Box Office Revenue, but none close to either the commercial or cultural take of 300. We can also add his voice work in Tales of the Black Freighter (2009) to his manly nerd-desire credentials, he has really worked the young insecure male demographic to the bone here. Sometime very shortly after his stint as Leonidas, though, he was already splashing around the Romantic Comedy.

I have never seen nor plan to see P.S. I Love You (2007), which should challenge Precious: Based on Whatever by Sapphire (2009) as one of the worst-titled films of all time. Apparently it's Romantic Drama, not Comedy, but to the demographic mentioned earlier that Mr. Butler has already firmly secured, it doesn't matter. It's the polar opposite of an overtly masculine film like 300.

It's important to note here that (500) Days of Summer (2009) also came out during this time period, which is by all standards a unique and very good Romantic Comedy. In fact, it's what all Rom Coms should be and how they may be treated in the next decade. Will that actually happen? Fuck no. 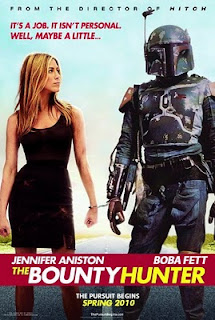 So back to that big list, take time to notice a few things: In 2010 we've already equaled 2008's total of cringe-worthy Rom Coms, and are on pace to double 2009's total. We've also grown into three big separate kinds of these films - you have the standard Bankable Guy / Bankable Girl / Goofy Premise that embody most of Mr. Butler's films as well as most of Matt McConaughey (I think they should have a Rom Com-off, except dressed as their Reign of Fire characters). Subtle difference is the Unbankable Guy / Unbankable Girl / Goofy Premise that has taken foot lately - these are films that look like they were made over a long weekend, usually with an '07 or '08 "It Girl" (see When in Rome and Leap Year). Finally there seems to be a growing interest in the Utter Sellout - the giant ensemble cast Rom Coms like He's Just Not That Into You and Valentine's Day that attempt to simply jam as many stars onto the poster as they can, and then actually end up performing spectacularly. As of right now I do not understand how any of this possible, but as long as someone makes money, it'll continue.

So it seems natural that Mr. Butler with his natural jawline, scruffy ne'er-do-well beard and general cocky-but-lovable attitude would be a great choice to headline this kind of film and make someone (him) lots of money. Since 300, Mr. Butler's Rom Coms have grossed a total of $163.5 million while his actioners have garnered $99.5 mill. The spending power of cliché-loving women in the late 2000s has actually surpassed that of the cliché-loving man. Looking at the atrocious film choices of Mr. Butler elucidates more about shifting demographic trends than almost any other indicator.

What IS notable, however are his characters in his latest two Rom Coms. In The Ugly Truth (whose funniest part is its poster), Mr. Butler plays an extremely chauvinistic, even stereotypically masculine individual who ends up causing his greatest detractor to fall in love with him (I love how Katherine Heigl made this film after criticising the Apatow Crew. She has this awful tendency to appear cool starring in radical films, then backtracking her association. Don't worry, though, it appears Apatow & Co are also well-aware of this phenomenon). Likewise Mr. Butler in his latest Affront to God, The Bounty Hunter, is also a very manly role opposite the frettering female lead. Actually, the film seems interesting in its portrayal of the criminal ex-wife and struggling but honourable ex-husband (See also the current Parallel-Universe relationship of Kate and Sawyer on LOST). I haven't seem the damn thing, but its treatment of gender roles could be interesting even if the plot and characters are typically trite. It's the kind of film significance that tends to be lost on some film and culture critics.

So What?
A few more notes on Mr. Butler before I leave you to your Basketball Tournament (Northern Iowa...what the hell). I don't know what it is about Scottish Actors that leaves them incapable of dropping their accents for any film. I also can't believe how many links I applied to this post.

In general, though, I think Mr. Butler's career is not forfeit. His Rom Coms are really equally as terrible as his recent Action Movies, and his characters in each are hardly played differently. It's as if he always plays the same chiseled, charismatic, cocky asshole put in different situations. Watching Mr. Butler in Gamer is virtually the same as watching him in The Ugly Truth except with varying levels of explosions (Ugly Truth by far). He's a pretty awful actor who consistently makes awful movies that make a shitload of money. And in the end, that's all that really matters. Insecure geeks and fanboys may let their hearts sink a bit when seeing previews of their SPARTAAAAA!!!!1!!@! icon against Jennifer Aniston in the latest Rom Com, but essentially when truly evaluating both the critical and cultural significance of the medium, it doesn't make a difference which direction Mr. Butler's career ends up.

After all, this isn't madness. This is Sparta.