Because it was on TV: The Acronyms and Anachronisms of Jersey Shore

by Roderick Allmanson at precisely 08:27
I already made a substantial Jersey Shore post over here, but this show just isn't going anywhere so it's worth another one. Under the right lens of analysis, it's also one of the most fascinating on Television today. It's also one of the best showcases of trashy T & A in years.

It's also massively popular. While it's close to dominating Cable, it's actually beating many Broadcast networks for the 18 - 49 year old demographic. Yeah, IT BEATS NETWORK TELEVISION. The reasons for its sudden ubiquity I've discussed earlier, namely the simple fact that its watchers tend to dismiss the show as equally as its detractors. Jersey Shore is a showcase of trash TV, there aren't a lot of folks who actively watch it believing in good drama. It's an escape, a trend-setter and a witness to the mindless excess and poor character that typifies this great nation.

Two interrelated components of the show stand out to me though (having watched um...yeah I've watched this entire season. Mostly prior to the Labour Day Marathon). These are the competing traits of a steady stream of neologisms amongst apparent anachronism. Jersey Shore is a zeitgeist-fueling trendsetter with parameters that fit the show better to a period 15 years ago. I'll explain, starting with the present: 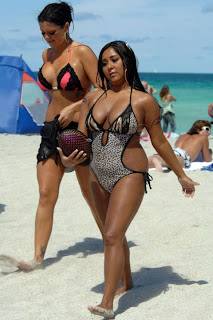 The disturbing amount of Jersey Shore-isms impacting our cultureis obscene. These range from a slew of Acronyms: GTL (and its variations, including GTS), GFF, MVP, IFF, MIA, DTF* to phrasings including "Extract the grenade," "You wanna Smoosh," and "We got landmines, bro!"** If you understand instantly what all this means, congratulations, so do an unbelievable 6,536,000 Americans. The slangy, slurry speech has infiltrated youth culture for sure and it seeps its way up from there. The acronyms especially are almost a code of who is in on the show or not. If I tell someone on the street to go GTL they either get it or they don't. When you've got a show as trendy as Jersey Shore, it's actually a mark of coolness for understanding. Thus this program has sunk its hooks into our culture, refusing to release as long as it's a cool show to watch.

Jersey Shore is definitely the "it" right now. It's right on America's pulse. It's so hot actually that the cast is attempting to trademark their names, to more and less success. Actually reading this article real fans can immediately tell that its bunk - the author mistakes "Grenade Free Foundation" for "grenade-free America." It's part of an active ignorance by the rest of culture that is very willing to write off the entire ordeal as trash without watching it (I mean, c'mon, they could at least watch it and prove their own hypothesis). It creates another standard of viewership as the renegades who can find the delight in the show, not pretentious or snooty enough to dismiss the trash.

Thus, while Jersey Shore is cutting a mean swath through Pop Culture the show itself is anachronistic to zeitgeist. This is in order to heighten drama. Are we really to believe that a group of twenty-something Guidos (another term taken and morphed by the show) have no cell phones, computer access or other technology? The housemates share a single land-line phone and their access to a computer when JWOWW and Snooki wrote a note to Sammi was more rare and difficult than it should have been in this age.

The show looks like it could have been produced in the 90s. It's interesting that this is mostly due to the lack of cell phones. Cell phones are so ridiculously rampant in today's society, even my 10-year old cousins have cell phones. It is really just another mark of the show's "Manufactured Reality" as well as the distance the "characters" these people play (apparently themselves) have from their actual selves. Our culture has gotten to a point where the absence of cellular devices in mainstream media is noticeable. 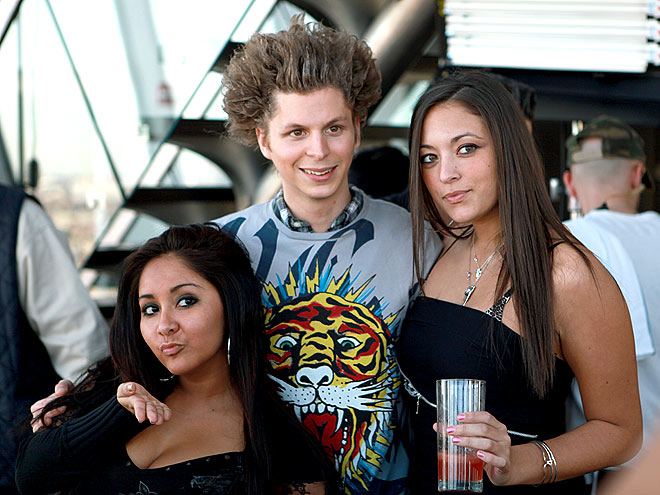 I thought about this when watching Scott Pilgrim vs. the World (2010) last month. The eponymous Scott lacks a cell phone the entire movie, which is enough to make it (along with much of the style, homages and themes) anachronistic. Compare this to film like The Departed (2006) which heavily relies on cell phones and the believable importance of their constant use to plant itself surely within the zeitgeist. We reach another question however - is the use or not of cell phones in television and film truly anachronistic or does it only serve to plant the piece of media forever within the current time period? Are cell phones going away or can we expect them to be around forever - affecting how characters get around in TV and movies from here on out? Will we always watch Jersey Shore and think "Where the hell are their cell phones?" as time goes on and they become even more ubiquitous?

This may be a weird thing to notice. In Jersey Shore though, the lack of technology serves many valid production purposes. That is, it causes problems. Taking away phones (presumably the producers confiscated them prior to filming) leads to miscommunication, frustrations (ie if Sammi wants to call Ronnie at Klutch, she's unable to) and generally lets the tensions grow. The lack of computers also lead to less distractions, allowing for both the cast to grow tension by spending constant time with each other as well as disallowing for any outlet for that tension and boredom. When all this is combined with eight of the craziest fucking Guidos imaginable it's a powder keg that only needs a tiny Angelina-shaped match to ignite. That's damn good TV, brother.

Thus there's some irony that an anachronistic show (either purposeful or not...probably not) has spurred some of iGeneration's most bonus catchphrases. Although that's not the first time that's happened.

**Translations: "Get the ugly girl out of here," "Would you like to engage in relations?" and "Somehow large, unattractive women have infiltrated our personal space, my friend!"