by Roderick Allmanson at precisely 23:36
I had the good fortune to check out one of the best films of the year so far this past weekend. I went alone because no one else wanted to see it. Dammit, this is Hot Tub Time Machine (2010) all over again...I present to you, The Social Network (2010): 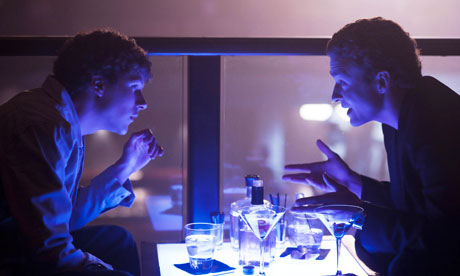 Really the only fault in this film is the somewhat generic plot. It's a rise-to-the-top-but-abandon-everyone-and-everything-that-matters kind of schtick. Some comparisons around the Interwebs have already been made to Citizen Kane (1941), There Will Be Blood (2007) and Goodfellas (1990). Of course what might run through your mind is that these are all incredible movies, all three some of the greatest of all time. Does The Social Network par up?  Probably not with these three, but it's like comparing cheese pizza to pizza with pepperoni, sausage and pineapple - a bit less flavour, but its still some damn good pizza (Daniel Plainview is surely the pineapple). Right. On with it then.

Every technical part of this film is incredible. The writing of Aaron Sorkin jumps out from the first few phrases between Zuckerberg (Eisenberg) and his gf (Rooney Mara) and never lets up. It's quick-paced, purposeful, succinct and incredibly tight. I'd be heavily surprised if this didn't pull down Best Adapted Screenplay come February. The words bounce around like silk, they pour and drip and soothe, it's ingenious. The editing interweaves impeccably between flashbacks and court cases, occasionally dawdling on the former, although its structure isn't bound to the hearings as a strict framing device. I was actually reminded of Goodfellas while watching some parts in which the plot is developed through sequence rather than scene. This is tough to do and David Fincher nails it. The editing is crisp, hardly a scene lingers longer than it should, and its two hour running time never feels dragging or hurried. To a tee the creators crafted this film beautifully.

The plot is tight. Character is quickly established and every lead is given a reasonable motive, even folks like the Winklevai (Armie Hammer played both twins, a fact impossible to know unless you knew it. There are many special effect folks in the credits due in part to this seemless constant effect [including multi-person, crowd dialogue, double rowing scenes and slightly different hairstyles] that Fincher pioneered with The Curious Case of Benjamin Button [2008]. Nice to see that technology applied. Now if we can figure out something to do with technology used for Transformers (2007)...Gobots: The Reckoning (2013)? wow that was  long tangent) have a justifiable, if not douchey arc and motivation. Eisenberg and Fincher paint Zuckerberg as an ironically socially awkward, borderline Asperger Syndrome, wannabe asshole wunderkind who was continuously bitter towards the people closest to him. He's almost unlikeable, throughout it's much easier to identify with Eduardo Saverin (impressive performance by future Spider-Man, Andrew Garfield). Saverin's lack of expertise and seemingly lack of ambition however, doom his association with the idea of a generation from the start.

This generational capture, the notion of striking the kettle as it's hot comes largely from Sean Parker (JT). In the film Sean is this rock star kind of programmer, business cutthroat, the "devil" the creation myth needs. It's he who pushes Zuckerberg the most to capitalise on his great idea. It's important to note however, that neigher Sean nor Mark are really in this thing for the money (which Mark admits a handful of times). As he said with Napster, it's not about getting rich - it's about changing industry, changing the world. The true life Sean Parker seems to agree. Whether Zuckerberg threw Eduardo out due to Parker's influence, Saverin's lack of common ideology or simple resentment over his inclusion in Harvard's Phoenix Club is debatable. At its core though, The Social Network tends to be about what happens when normal, socially-flawed college students are suddenly given the opportunity of a lifetime. They fuck up.

I have a bit more to say about this flick, but I'll leave you with that for now. Stay tuned, dear readers, Part II will drop sometime in the next couple of days.