by Roderick Allmanson at precisely 00:09
For no real reason at all today we're talking about Admiral Ackbar. Bar none the most ridiculous high-ranking character in Return of the Jedi (1983), Ackbar I believe takes a large amount of guff from the fan community. He was always one of my favourite characters from the Original Trilogy however, and I believe there is more to dear Fishhead than meets the eye. This warrants closer examination, my friends. I give you -- the Ackbar: 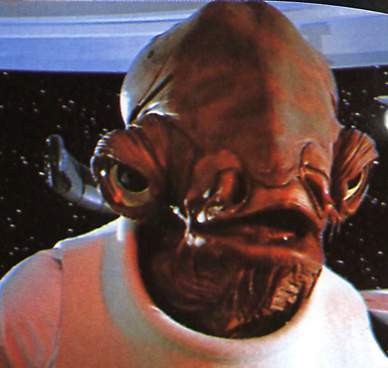 You may immediately notice a few things. What the hell is wrong with this guy? Clearly some kind of Fishy-Squid Monster, Ackbar is a Mon Calamari from a planet of the same name. His species were typically the more docile of two inhabitants of the world, the other being the violent and undersea dwelling Quarren. The Mon Calamari lived in these big bubble cities and cruise ships (which they later converted to Rebel Frigates...wow the Rebel Alliance sucks). There is more information about Ackbar's past and upbringing here than you will ever want or need in your life.

Ackbar in RotJ is introduced around midway through as the leader of the Rebel Alliance's Military, likely the equivalent to someone like Grand Admiral Thrawn for the Galactic Empire (because Grand Moff was a governing position, although the Military-Industrial Complex of the Empire was madly out of control - a likely reason that Tarkin's baby was built for simultaneous leadership, systems control and mobile government). The Battle of Endor thus was to be basically the Rebel's last stand against the Empire. They were all in. I don't think the stakes were ever made that clear in Jedi, if they failed in that battle, really there was nothing left. Every ship at their disposal was sent in for combat. And Ackbar is leading this shitstorm. I have some problems and some reservations here, let's start with his most famous catchphrase:

I'll point out two things: The line is actually pretty smart as Ackbar almost immediately catches on to the Emperor's ploy and wishes to regroup immediately, risking completion of the Death Star II, a huge boon to the Empire, but also saving the Alliance. Note that Calrissian's initial thought process is that the Empire simply knows they're coming, Ackbar correctly suggests the Trap. However, immediately after he suggests a retreat, Ackbar is easily convinced to follow orders from a Smuggler-turned-Baron Administrator of Cloud City (actual title, also he won this position in a game of Sabacc. What the hell is with this Universe?)-turned-General for some reason. You can watch the whole ridiculous scene unfold here.

Yes, suddenly Lando with no prior military experience in engagements of this magnitude has authority to override the Supreme Naval Mind of the Alliance. We can take one of two things from this: 1) Ackbar really sucks as a commander (note his great observation before the Death Star is about to blow - "Move the fleet away from the Death Star." Thanks for the heads up on that one; or 2) Ackbar is a damn pushover who bows easily to spokespeople for Colt 45. Seriously, anyone else realise that most of Ackbar's character is revealed through interactions with Billy Dee Williams? We're only making fun of him so much all these years because his only scenes were with the smoothest character ever in the Star Wars Universe. And yeah, he's a bit of a goof.

But there's more to him than that. Check out the above video about 6:45 in. After Arvel Crynyd of the A-Wing Green Squadron crashes into the Executor, everyone around Ackbar cheers, EXCEPT for Ackbar. I always wondered why. Is this a moment where Ackbar reflected on the chaos and unpredictability of War? Is he saluting Crynyd's brave kamikaze sacrifice? Mourning a great Rebel Pilot? Or just shaking his head realising how stupid it was that, apparently, the Empire's Greatest Warships could have been destroyed this easily the whole time. I hope it's the latter. In that little head bow Ackbar's recollecting all the men he sent against Star Destroyers, nay, all the fear the Rebel Alliance has had for the terrifying ships, one alone used to subjugate a star system. Really, even a crazy old crop duster apparently had the talent to take them down (Speaking of which, how did we take down the ships across the world in Independence Day [1996]? Did every fucking village have to sacrifice some crazy alcoholic pilot?)

So there's this solemnity to Ackbar that I believe we tend to overlook due to some of his goofier moments:

Yeah. Like that. Ackbar is almost synonymous with insanity now. Especially that fad. This is all great to laugh at, but he's essentially a rationally-minded military leader who attempted to provide for the best interests of the Alliance. Calrissian is a lifetime gambler. He was willing to risk many lives for their one chance to destroy the Emperor's Ultimate Weapon (as well as hold out for his friends on the Planet Surface). Actually, his gambit did cost a few of Ackbar's people's starships, which could add to the tension between the two, although Ackbar never stands up for himself. He sits there sad with a weary head and heart. I don't think he's even invited to the final Gay Ewok Party. I mean, fucking Vader was invited. Yeah, that guy. the kid from Jumper (2008) ain't invited to my Gay Ewok Party.

The thing is, Ackbar also represents a vital part of the Rebel Alliance: He's a different species. The Empire was notoriously human-dominated (actually white English dominated, but that's besides the point...). The Rebel Alliance was supposed to be an all-encompassing society like the Republic of Old (but all their leaders were stodgy white guys too...wait, who the hell would want a Chancellor Valorum action figure? Ooh he comes with a staff!). Of course, the first two films featured only stodgy white guys on both sides, so Ackbar's inclusion as a high-ranking admiral shows what was supposed to be a deep part of the Alliance's Unifying Ideology. But he's shown up by a black dude. Well there's something there for diversity I suppose.

I do have an Admiral Ackbar action figure. But maybe, just maybe I won't be acting out "It's a Trap!" under the covers tonight. Tonight...we hang our heads in memory of those that sacrificed for the Salvation of the Galaxy.