First Impressions: The Girl with the Dragon Tattoo

by Roderick Allmanson at precisely 23:12
I saw this a month ago now. Time to finally put up what I thought of it. David Fincher's The Girl with the Dragon Tattoo (2011) is by and large one of the best films of the year. It's emotionally gripping, adept storytelling, and compelling throughout its lengthy run time. That said, it's the kind of film that may not get much love come Award Season. It is not the kind of film, though, to care about what other people think of it. Some spoilers follow.

The first thing that really stands out for this flick is the colouration, cinematography, and direction. It's all spectacular. The mood set by lighting and camera angles continually matches the tone of the story and endures to snag the audience in to feel as much pain, sorrow, and even a bit of lovely loneliness that the characters feel. The manner in which this film was shot is in itself another factor in telling its story, which really is the best a Director can possibly shoot for. It is bleak when it needs to be bleak, cheerful when it needs to be cheerful (rarely), and remains interesting and engaging to look at.

From the opening credit sequence the emotionally intense and disturbing tone is set. This is integral to the film - the important story is told largely through emotion, although there is a fair share of technical analysis within the actual plot structure on the parts of the characters themselves, who act as crack detectives. The plot itself deals with some very heavy themes - incest, rape, abuse, manipulation, honour, and integrity are all major themes, mostly between family members.

The film is based on the novel of the same name, published posthumously by Stieg Larsson, who unbelievably apparently just had this shit lying around his house and was found after his death in 2004. The plot structure is very interesting. It is arguably deuteragonistic, focusing primarily on Mikael Blomkvist's (Danny Craig) story while Lisbeth Salander (Rooney Mara) has her own story, connected to Blomkvist at first and then wholly merged. Salander's path is essential to establishing her desire to aid Blomkvist when he tells her he is investigating crimes against women. 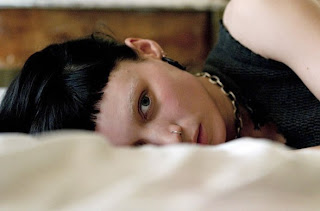 There are a lot of women in trouble here. Lisbeth's rape by her welfare officer is difficult to watch, but that's certainly not the worst that happens to the ladies here (see for instance, the original Swedish Title, Men Who Hate Women). There is certainly a parallel between Lisbeth and Harriet Vanger. The actresses playing each role appear strikingly similar physically and are similarly routinely abused. Both also eventually gain the upper hand and outwit their male oppressors (Alright - Huge Spoiler - Harriet by running away, Lisbeth by...well, you ought to see it yourself). It's about women breaking this oppression and securing their own lives and independence.

The film continues this idea of female empowerment. When Blomkvist is captured and helpless, a man in distress he is saved by the more than capable damsel, Salander. She also initiates, then directs the relationship she forms with him because he is one of the only sexual male figures in the story to respect her. When she spies him with another girl at the end though, she reverts to her emotionally confined shell. She is fundamentally anti-social and does not care to abide by societal rules, both pragmatically and in interaction with any other humans. When she finally allows herself to bond and connect with another person, Blomkvist, she misinterprets his attachment to her as exclusive, and hurts all the more when this is not true.

Salander is the really interesting character here and Rooney spectacularly devotes herself to the role. Near anorexic because of lack of food, fiercely dressed (which is ridiculous as a fashion movement), and completely apathetic to the world's judgment, Salander has become an immortal cinematic character. Rooney is also really hot and gets naked constantly, so that's a plus.

As for the rest of the cast, Chris Plummer has become the go-to old dude in many films lately (see also his Golden Globe win for Beginners [2011]) and he doesn't disappoint in that role here. And naturally, since this is a Nordic film, Stellan Skarsgård needs to make an appearance. If Antonio Banderas is the only bankable Mexican Hollywood has, Skarsgård is certainly the dude for anything connected to the North Sea. He's also a perfect slimy evil dude here. I'll never really hear "Orinoco Flow" the same way again, that's for sure.

Daniel Craig is very competent. He tends to be anti-Bond in many circumstances, running, crying, getting captured and basically being a normal human unlike some of his other recent franchise-oriented roles. He carries the story well, especially when we are able to see that Blomkvist is really just a disgraced, lonely man who connects with Lisbeth because he also can't deal properly with the rest of society. His only difference with Salander in this regard is that he still attempts to.

This was a wonderful Christmas movie. Really, the perfect feel-bad film of the season. That being said, I haven't read any of the books, nor seen any of the Swedish flicks. I don't care. This was an excellent film in every conceivable way and if the other interpretations of the novel (and the novel itself) are any good then good for them. This was still an incredibly gripping, intense, and rewarding experience. Like I said, I think it's a bit too out there and intense for casual Oscar Voters to recognize anything, and tho Rooney was nominated for a Golden Globe and may get an Oscar Nomination, it's an incredibly competitive year for the Women's Categories. So go see it, even though I am far too late in recommending it!

Labels: Impressions, Movies, The Girl with the Dragon Tattoo
Email ThisBlogThis!Share to TwitterShare to FacebookShare to Pinterest