by Roderick Allmanson at precisely 10:42
Who is the biggest action star in the world? Bruce Willis? Dwayne The Pebble Johnson? Jason Statham? I think not. All of these suckas would fall down to one man - Liam Neeson. Somehow, someway, Oskar Schindler himself has become the most reliably badass screen actor working today. Liam Neeson is turning 60 years old this year and is still teaching the young whippersnappers how to fall in line and not cry when facing down Wolves. In honour of this weekend's release of The Grey (2012), let's take a moment to look at the formation of Liam "Motherfucker" Neeson. It's also notable that each of these six roles comes with a classic catchphrase! Keep reading- 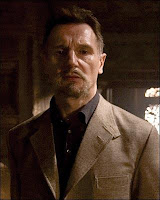 Chris Nolan need someone badass enough to train Batman. Yes, this dude needs to be able to brutally kick the ass of BATMAN when training in the Himalayas. Who better than Liam Neeson to bring gravitas to the role of Henri Ducard along with coldness, capability, and sincerity. Liam had been in more mainstream roles that required him to kick some ass before this, such as Kingdom of Heaven the same year and a brief yet vital moment in Gangs of New York (2002). His first foray in this vein of course goes back to Darkman (1990), but that was never the career path he chose. Until Batman Begins. In a spoiler-y way, Liam Neeson turns out to really be Ra's al Ghul, one of Batman's most interesting villains and Neeson with a quiet stern confidence makes the role come together.
Classic Line: "You never did learn to mind your surroundings!"

This was it. Taken was the moment where everyone realised just what Liam could do. Taken is such a brutal movie and Neeson exudes this relentless aura of badass that makes the whole movie. It's just him out there against the entire world and he doesn't let anything stop him in his quest for his daughter (not even her friend's drug overdose. Seriously, he just leaves her there!). Liam brings to the screen that genuineness - he's not smirking through the role or winking at the camera. Taken works only because Liam takes being taken seriously. He also plays a dude named Bryan. That's my name. Add in some Throat Chopping, can't get better than that.
Classic Line: "Now the next part is very important...they're going to take you."

Liam Neeson didn't really do a ton of fighting in Clash of the Titans but he still plays Zeus with enough emphasis and gravitas as anything else and it's the kind of movie that Neeson is acceptable in that would be pretty wacky ten years ago. His role is fairly minor although his presence exists throughout the film popping up here and there and he is again the driving force for every other character present. It's cool to see him counter Ralph Fiennes who is still obviously stuck in Voldemort mode. This is also by far the worst movie on this list, which is impressive because Clash of the Titans isn't all that bad. It's just that much of the plot and character choices do not make any sense at all. It's saying a lot though, about the quality of the Liam Badass Oeuvre that this is the crappiest of the lot. He also got the main catchphrase of the film - oh that silly Kraken.
Classic Line: "Release the Kraken!"

So you need a Hannibal? Someone who can rally the craziness of the A-Team? People who take impossible missions and specialize in the ridiculous? No better man than Liam Neeson to handle this role. He is a bit lighter here than other where but brings an authority that levels one of the funner films of the 2010 Summer. I really have trouble getting sick of that Flying Tank Scene. Liam brings the organized precision to a wacky, wacky movie.
Classic Line: "I love it when a plan comes together!"

By this point it's almost as if we could start taking Liam Badass for granted. I think Liam works because he often plays straight characters in very fantastic situations. All of his characters are very capable, however, and are not fooled by the people around him trying to manipulate things. They walk their own path with an indomitable will and righteous destiny. Unknown is exemplary at this, as Dr. Martin Harris Liam could lie down and accept his fate - instead, completely undeterred he kicks ass until he can find the truth. He does it all with a very defined sense of class and integrity. There is a strong appeal to that today in an age where it's difficult to trust anyone to do the right thing. Liam is there for us. Oh thank you, Liam.
Classic Line: "I'M Martin Harris!"

So at this point Liam Neeson has fought Batman, underground kidnappers, Greek gods, the U.S. Army, and an entire conspiracy network of seedy Europeans. What's left to get its ass kicked? It's almost an impossible question. How about Wolves? Yes - fucking Wolves. Liam Neeson needs to fight some fucking Wolves. Such is The Grey, opening yesterday. Liam is walking through this kind of role by now, but it's not really getting old. His voice alone steadies the men against the fearsome Wolf Onslaught, and again, his integrity, reliability, and capability carry both the narrative and the film itself. There's no other action star today worth the intensity and focus that Liam effortlessly exudes on screen. I don't understand why Liam has gone this route late in his career. I also don't understand why he's picking movies like this over Spielberg's Lincoln (2012). It's also notable how intense these films are. Besides the three major franchise flicks here (Batman Begins, Clash of the Titans, The A-Team), the films that center around only Neeson tend to be very hardcore, adult-oriented action flicks, which is also a refreshing market to exploit. At any rate, it seems like this noble badass is here to stay.
Classic Line: "Don't move...stare right back at them."