by Roderick Allmanson at precisely 13:07
With the wide release of Zero Dark Thirty (2012) this weekend past much more of the nation got a chance to lay their eyes on this divisive film. Like The Hurt Locker (2009) before it, director Kathryn Bigelow has sunk her teeth into contemporary American warfare like few others are capable of. Still, this film is not only about the final raid of Osama Bin Laden's hideout by Seal Team Six, but the immensely arduous decade-long process that got us there. SPOILERS for sure to follow in this open discussion, but you know that bin Laden dies at the end (right?). Of course, that's not really the point of this film.

So let's talk straight away about the torture in this film. Kathryn herself has some great things to say about it here. She argues that she is merely depicting torture without putting a political spin on it, merely emphasizing its role without condoning or condemning. To some extent that is true. All of 0D30 plays very linear and straight forward, which heightens its ability to tell a historical story. For this reason it purports and then demonstrates convincingly that it is telling a very accurate story. This is the kind of film that can be shown in history classrooms years from now thoroughly demonstrating what it took to find the man who committed the greatest foreign attack on American Civilians in history.

Even though the torture is accurate (and with a combination of highly public Guantanamo Bay and Abu Ghraib scandals as well as many corroborating firsthand accounts, any argument otherwise is fairly suspect), its very presence in this film is still saying something significant, despite what Bigelow attests. It demonstrates the lengths we went to find bin Laden, the moral compromises we made, and all of our seething anger and will that was fruitless for so long.

Ultimately, the film subtlety sides against the torture ("enhanced interrogation"). Only when the practice is outlawed are the CIA able to think more creatively and undertake a deeper investigation of the links to bin Laden. The impetus and initial data behind this investigation, though, is clearly detainee testimony. It's therefore saying that the torture wasn't the whole means towards the search, but it provided the data required to build some leads.

Al Qaeda only exists as it does in the real world - a mysterious organization that only seems to surface during a national disaster or terrorist attack to remind us why we're fighting. It overlays a constant tension throughout the film and (if you haven't memorized the dates of tragic events) any scene can end up in an explosion. It's easy to forget what we're up against (both in the film and in real life), when we seem to just be hacking away and getting no where. Suddenly lives are lost and the pressure to stop the insanity is reinvigorated.

We don't like seeing the good guys as the ones torturing. So much of this film actually is full of this, though - the Americans are the ones at center beating the hell out of their enemies but generally coming up with nothing, dead ends, or getting blown up themselves. The scenes are brutal and dehumanizing, allowing us to break our enemy down to the level we believe them to be - shitting their pants and walking around on all fours - humiliated and degraded. Is such brutality justified in the grander scheme of the search for bin Laden as both revenge and prevention of future attacks? This is no better exemplified in Maya (Jessica Chastain).

Jessica Chastain has been surging lately via a ridiculous string of 2011 movies, including Take Shelter, Coriolanus, The Debt, The Tree of Life, The Help, and Texas Killing Fields. And yeah, she won at least one award for all of those. This is the first movie though where she's really front and center, carrying the whole thing from beginning to end. Her will and confidence drives every bit of the Hunt for bin Laden and the entire film. She pushes that single goal (as she says to CIA Director Leon Panetta [James Gandolfini], she's done nothing else in her career) so much farther than anyone else was willing to and far beyond when her superiors thought it was no longer important.

There isn't any real explanation for this drive, other than her being a woman who is just consumed by her work. There isn't an indication of whether or not she had family affected by 9/11 or any other connection. She lands in the film on her feet and keeps striking from there. The only indication of her reasoning is the 9/11 tape played as the film opens. The idea, of course, is that that snippet is the only justification anyone should need in pursuing bin Laden until his death.

There is a lot more external factors that affect Maya. There is the constant danger of living abroad in a country that hates you. There is rejection and suspicion by superiors. There's also her best friend in the office, Jessica (Jennifer Ehle) who dies due to her own belief that money trumps ideology, which is a much more western way of thinking than can apply in the Middle East. Maya knows that is a fallacy, but is too tempted by the possible lead to properly advise against the meeting of an al Qaeda doctor at Camp Chapman. The result is one of the only attacks in the film that far ahead you can see coming, but the destruction of both a promising lead, Maya's only friend, and the reassertion that this task is nigh impossible greatly tightens and forwards the narrative.

The other actors in the film do a great job, too, although they are fairly outshined by Chastain. Notable is Mark Strong as a mid-level CIA boss whose own conviction in avenging 9/11 aligns with Maya's, but isn't strong enough to convince his own bosses for a strike. It's an intensity Strong usually brings to villainous roles, and in a film that straddles the idea of the Americans needing to make moral compromises to acquire their target, he works well.

Lastly, we come to that final gripping scene of Seal Team Six invading Osama's secret complex in Abbottabad, Pakistan. It's a supremely well shot scene, full of rising tension, stunned awe at both atrocious and heroic acts committed by the Navy SEALs, and even bits of humor. It's the culmination of a decade of planning and intelligence, which leaves Maya alone at film's end in tears both at the joy of completion of her mission and the knowledge that she hasn't done anything else with her life. Indeed the film solely demonstrates from start to finish her hunt, which consumes her life. 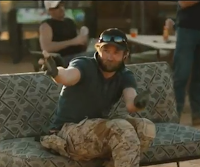 As for Seal Team Six, they're depicted as the true American Heros that they are. They are one part jokey bros, but much more thoroughly are executing their job through teamwork, intelligence, and supreme skill and discipline. It's nice to see Joel Edgerton from Warrior (2011)  and Parks and Recreation's Chris Pratt (jacked up) leading the way here, both really walking that line between likable dudes and cunning systematic killing machines. They also seem like great guys to hang out with - that's just how I picture my Seal Team Six.

So much of 0D30 is just direct action. There is little room for metaphor or political bias. It is extremely clean cut and literal storytelling. In as much, Kate Bigelow has proved herself again to be the best modern warfare director ever. There is always going to be controversy in films that canonize recent history like this. It's almost akin to how the creation of Facebook is culturally remembered through The Social Network (2010). The Hunt and Assassination of Osama bin Laden will now be remembered through Zero Dark Thirty. While The Social Network certainly put a directly manifested spin on its events, the parsimonious outlay of events in 0D30 ought to make it a reliable bit of history for years to come, despite Seal Team Six's insistence that they do NOT pop their collars.