by Roderick Allmanson at precisely 08:01
Hello once again folks and welcome to The Long Halloween - our once a month gander at the best Holiday specials out there today. This year we're taking it to The Simpsons and pairing an episode with each great Holiday. Today is New Year's Day, and while there isn't really a single episode devoted to the Holiday, we've got three moments to cull from: In "Itchy and Scratchy Land" (S6;E4), the Simpson family travels to the eponymous island vacation getaway for a wild whirlwind adventure. What really turns Homer and Marge on to the journey though, is Parents Island, which is a destination spot away from all the mindless wiener kids and their boundless energy. While there they attend TGI McScratchy's - where it's always New Year's Eve. A place called Thank Goodness it's McScratchy's doesn't sound appealing anyway, but a constant stream of New Year's Eve celebrations does sound like hell. It's the elation of the New Year, new beginnings, but when that's all you celebrate, you're never really moving on. It's a brief moment for sure, but the idea of it always being that magical night somewhere is a engrossing, if not irritating one. Still, I'm sure John Travolta makes a mean Old Fashioned.

"Not on my watch!" from "Trouble with Trillions" A New Year's celebration briefly opens "Trouble with Trillions" (S9;E20) with the denizens of Springfield eagerly awaiting the Ball Drop over Town Hall. There's a bit of hilarity as the show points out how stupid and arbitrary the countdown really is - as the Ball stalls the town is stuck on chanting "ten! nine! eight! eight! eight!" until Wiggum fires his pistol at the ball, causing it to crash and burn into the Town Hall's roof. Here we do get to round out our New Year's Traditions a bit, with a drunken, slobbering Krusty singing Auld Lang Syne (yes, that is the name of that song, I definitely had to look it up) and of course, filing the previous year's taxes. OK, that may just be a tradition for Flanders, but in that spare moment The Simpsons actually develop a little storyline and some great character moments. This of course feeds into an episode about something else entirely (Burns' theft of a trillion dollars from the US Government after World War II and his subsequent gift of that money to Communist Cuba. Yeah, it's a tricky episode). But here there's also Homer's anger at the crummy preceding year - it's an arbitrary human construct that causes the ticks of minutes to be replaced by years, decades, or millenniums, minute by minute there isn't actually much of a difference when the clocks tick over, but The Simpsons nail the great shifts in our perception and feelings a New Year brings.

Wonders or Blunders from "Treehouse of Horror X" 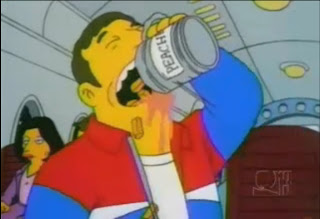 Last on our list is the tenth Treehouse of Horror (S11;E4), particularly the third segment which riffs on the Y2K scare, whereupon Homer screws up the Power Plant's compliance and causes the end of the world. It plugs in the last bit of New Years Tradition we've been missing in the other episodes, namely, Dick Clark's robotic presence for his Rockin' Eve. With his passing this year though, it will indeed be a different kind of night, though Ryan Seacrest has stepped up as heir apparent in recent years anyway. But the rest of this episode is great - from Krusty's pacemaker set on Hummingbird to the Rocket full of Not-so-great Celebrities like Courtney Love, Spike Lee, and Tom Arnold, seen here eating a can of peaches. Apparently, he is the only celebrity who allowed his real voice in the episode, being a good sport over the show poking fun at him. That's just another reason why we tend to underrate how awesome a dude Tom Arnold is.

So, Happy 2013, folks! As we always do, we can hope that this year's a lot less crummy than that last one!