by Roderick Allmanson at precisely 04:12
Here we are again folks - it's The Long Halloween - our year-long look at the greatest holiday television specials to get you in that special mood to celebrate an arbitrary occasion once a month. We began highlighting just anything, but we quickly ran out of stuff to talk about. This year we've focused on the one show that has enough episodes to cover just about every holiday out there - The Simpsons. Our pick for April is unconventional to say the least - it's an April Fool's Day episode, but it only really uses the holiday to frame a narrative around a clip show. It's a testament to the writing of the series, though, that even this throwaway clip show contains some really great original material in its tight story as well as a relevant and natural means of bringing up past footage. 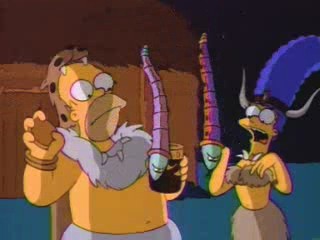 The episode, of course, is "So It's Come to This: A Simpsons Clip Show" (S4;E18). We don't often get clip shows anymore in mainstream series, and if we do, usually it's a clever spin on the template. The major rationale for the large amount of Simpsons clip shows in the earlier seasons were both to give the writers and animators a break as well as to cut production costs while FOX could sell it for the same price in syndication.

The episode remains my only real knowledge of how April Fool's Day was started, from pagans who were cheesed off at Christians on their new year (April 1). So naturally, this episode revolves around a few April Fool's Day pranks that eventually cause Homer to lapse into a coma. Homer duct tapes Bart's eyes shut, making him think he's blind, and then gives him some milk he had been keeping next to the furnace for six weeks. As revenge, Bart manipulates Homer into drinking a severely shaken up can of beer that causes the house to explode and Homer to lose the ability to walk. Homer eventually regains the ability to walk ("I've tried everything...") but falls into his coma after being crushed by a candy machine.

There is a surprising amount of new footage in this episode and it's all great. From subtle things like Leo Sayer records melting to other great jokes ("We're going to need pretzels, I repeat, pretzels") and even some sly movie references (Barney replicating the ending of One Flew Over the Cuckoo's Nest [1975]). An underrated moment is when Homer is disappointed he won't be able to continue his life's work and Marge mutters with a perfect hint of sincerity and sarcasm, "Society's loss, I suppose." There's also a bizarre Mr. Burns moment where he bursts in and claims how much Homer has wronged him by asking for money (which Burns denied him).

As for the clips themselves, there is an incredibly smooth integration of earlier momen 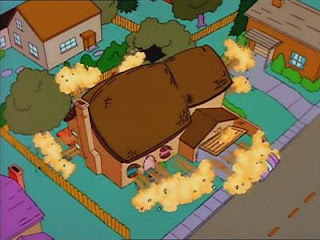 ts into the story. Since the characters are essentially reminiscing about the life of Homer Simpson, it's a fairly natural set-up. The show also presents itself as very self-aware of how forced and hokey the whole thing is (Grandpa talking directly about how comas are similar to watching old clipshows on tv). There's also a nice reflection when Bart brings up a great episode of Itchy and Scracthy ("It was a good episode...of our lives").

There's other weird stuff here. A Treehouse of Horror clip made it in somehow, which kind of blurs the line of whether or not that episode was canon, but the flexible reality of The Simpsons allows that to slide. There's also an expanded bit of Homer's fall into the Springfield Gorge from "Bart the Daredevil" (S2;E7), which is still hilarious.

An interesting thought occurred to me while re-watching this: the kind of set-up for these clips almost foreshadows the familiar Family Guy set-up. A character starts saying "Remember that time when you..." and then the show cuts to a funny non-sequitur. The difference of course, is that even in a clipshow there's actually still some touching moments between Homer and his children. Repeatedly while Homer is in the coma, both Bart and Lisa genuinely reflect on how much he means to them. The episode of course ends with Homer losing 5% of his brain and choking Bart, though, which ties the whole thing together really well.

What do you think? Is this the greatest Clip Show of All Time?