by Roderick Allmanson at precisely 09:10
For some time now we've been taking a moment on each holiday, once a month, to highlight the best TV and Movies to watch to accompany the festivities. We soon ran out of the really good ones, so now we're just focusing on The Simpsons. There is such a wealth of episodes to choose from, they've covered just about everything. Today, as we celebrate our Independence Day with Bill Pullman, it's time for "The Summer of 4 ft. 2" (S7;E25). 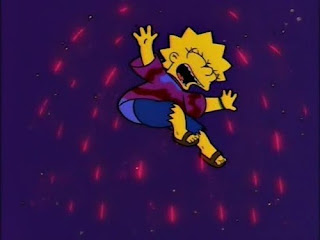 This is as much an episode about summer, growing up, and embracing one's identity as it is about the Fourth of July. In fact, there is really just a small Independence Celebration, but it's enough to make this episode worthwhile viewing. At the core, this is a very Lisa-centric episode, although it's Homer who gets all the best moments. When the Simpson family go on vacay to Little Pwagmattasquarmsettport, Lisa decides to leave behind her old persona and attempt to sell out to the culture of Gen X to gain some friends.

The episode begins with one of the most accurate (and pathetic) sprinkler pantomimes from Milhouse that really do sum up a lot of Summer. There's plenty more good moments depicting how amped up kids can get on the last day of school and how the quest for knowledge is never truly complete ("Was Abraham Lincoln okay?"). Back at home, Flanders has a long convoluted story as to why he can't stay at his vacation house ("Seems a man drove up onto a traffic island and hit a decorative rowboat full of geraniums. Now they're trying it as a maritime offense.") but Homer won't take the incredibly kind offer without a little more on Ned's part - fixing his septic tank ("Hello Mr. Brown-ground!"). It's the epitome of ungrateful Homer. At least his notes were helpful.

At the same time, Lisa is dealing with her own patheticness and the simple fact that she really doesn't have any friends. She struggles with her identity, ultimately adapting herself into a well-made pastiche of youth culture that successfully entices local kids in the town. This causes an upset of the status quo, when Bart becomes unpopular with the cool kids, which is the reverse of their roles in Springfield. Bart becomes nefarious as brothers are wont to do, and spoils Lisa's newfound popularity through showing her friends the "real" Lisa - nerdy perfect teacher's pet.

Of course, due to the fact that all the kids actually liked Lisa (from teaching them things like how they shouldn't drink seawater), they are fairly okay with her nerdy leanings, and decorate her car with seashells and other beach combings. Of course, it's really Homer's car ("Sweet merciful crap!"). There's this theme of growing up, perfectly encapuslated in a metaphor with the hermit crab - as Lisa notes, when it grows too big, it finds a new shell. This episode is all about Lisa finding a new shell and evolving from what her mother thought she was ("And a star on the fanny!").

This episode is full of many other great side moments that chronicle the family's summer vacation to a very Cape Cod, or at least a very New England-esque Summer Town. This episode is possibly full of more background sight gags than any other, including Homer's slow smile once he realizes that Bart drew the "dud" in the mystery date game and he has similarities to Milhouse ("He looks just like you, Poindexter!"). There is also a classic gag where Milhouse suddenly appears from behind a cereal box at breakfast after a lengthy argument between Bart and Lisa. 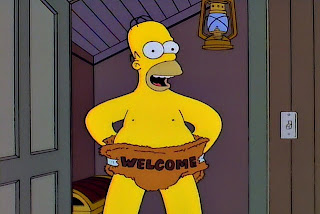 The M-320 with a short fuse is a great bit, but I get a lot more enjoyment out of the following scene that features Marge in the background mopping up the mess with a frustrated look on her face. There's also a real quick second shot of her cleaning all the burn and destroyed dishes. On the subject of Marge, I also like her line "Don't make me get the carny!" at the carnival - there's just a level of absurd juxtaposition there, as if the carny was a serious authority figure whose job it was to ensure their games are played fair.

The episode also wriggles in a ton of references to trashy 90s shows like Blossom and Baywatch as part of the interaction with the kids. The Simpsons usually doesn't date itself as rough as this, but I haven't thought of Blossom in years. In fact, I've never really thought of Blossom, but as a 90s kid that's a fun gag to get nearly twenty years later. Here's a fun fact: Blossom actually premiered over twenty years ago. Jeez. Maybe it's fun to watch while eating baguettes?

Finally, I'm sure it's not that funny now or ever was to any other sensible human being, but when I first saw this as a kid I distinctly remember laughing uncontrollably at the final sight gag - the hermit crab crawling into Homer's Buzz Cola can. I think I laughed for twenty minutes. I couldn't handle it. It's not that great of a joke, but damn I just thought the little guy's misguided attempt to find a new home through Homer's waste was the funniest thing I had seen in my life.

So, if this episode doesn't make you yearn for a Cape Cod vacation, I don't know what could. In addition to celebrating the birth of our nation by blowing up a small part of it, there's a lot to be said here about Summer Vacations, weird vacation friends (any of those characters - Erin, Dean, etc - ever make it back in any future episodes?), and finding yourself as you grow out of your shell.