The Funniest Movie of the Year for the Past 20 Years

by Roderick Allmanson at precisely 22:42
Watching the atrocious Dumb and Dumber To (2014) has made me think a lot more about how great Dumb and Dumber (1994) is, which I'd consider one of the funniest movies of all time. But then I think about This is Spinal Tap (1984) or Blazing Saddles (1974) or The Jerk (1979) and have to reconsider. I think I can at least claim, however, that Dumb and Dumber is the funniest movie of 1994, which got me thinking - what movies can claim that title year by year? Comedy is always a subjective, contentious issue, so  take a look at my pics here and then feel free to troll the hell out of the comments: 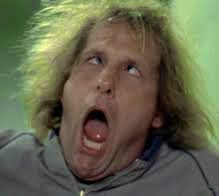 You could have figured this out by the heading of this post. There's very few more quotable comedies that are so keenly written in its dumbness. The plot is a loose construct for plenty of road-trip jokes but when it settles on Aspen and making fun of the erudite Colorado skiers, it really shines.

Between Madison and Happy Gilmore (1996) I always think this has an edge even if it's really just a prototypical man-child movie. There's so much subtle insanity to the world, though, which is constantly much stranger than Billy himself. From the sardonic High School principal to the unnecessarily lusty maid, there is so much more going on around Adam Sandler that pushes its modern surreal humour. Also every scene looks exactly like my Elementary School.

This was the first really difficult year. There are better comedy films out there for sure, like Kingpin or Fargo, but is anything funnier than Black Sheep? Kill whitey, hell no.

Austin Powers is the easy choice here, but to be honest, it's aged pretty poorly. And I still get hard when I hear those first few chords. Trey Parker and Matt Stone's humour was still developing here, but this is a surprisingly confident film full of shit like this that still cracks me up for no reason.

It's tempting to go with more late 90s efforts by the Farrellys or Matt and Trey, who dominated 90s humour, but when the Coens are on, they're on. The slow burn of how funny The Big Lebowski really is in undeniable, and while it may not necessarily be seen as a defining comedy movie (it does seem to defy genre), it's engrossing and endlessly re-watchable.

Going way outside the box, here, folks. American Pie is the most mainstream comedy of 1999 and Office Space is probably still the most relevant, but Galaxy Quest has put in its time, if only as an eerily canny Star Trek spoof. I just wish J.J. Abrams had seen it.

Again, we have a pretty mainstream option in Meet the Parents here, but I can't tell you the last time I watched it, and despite renewed relevance through James Franco, I'm leaning towards Coens again, because Dude, Where's My Car? also just feels old.

2001 is tough. Why is 2001 so tough? Jay and Silent Bob Strike Back may win on jokes, but it's not a very good movie, and the references wear thin. Wet Hot American Summer is also far more subtle, but is that a good thing? It's more conceptual than laugh-out-loud. It really hurts to knock off Super Troopers, but I've seen both recently and Zoolander just wins. By now it feels like it should be overrated, but it just wins.

I feel like every year has one comedy that irks its way onto College Campuses and is seen enough to be quoted to death and revered without ever really being that good. In 2002 this was National Lampoon's Van Wilder, which has been diminished through a decade of sequels and knock-offs. I thought about going way outside the box with Kung Pow: Enter the Fist, but I'm not sure its anti-comedy holds up. So let's go with most laughs per minute.

2003 is an incredible year for comedy, particularly Christmas flicks on either side of the spectrum - Bad Santa and ELF as well as Will Ferrell vehicles on either side of the spectrum - Old School and ELF. Let's split the difference and hit what's probably one of the more unique comedies on this list - an immortal, hilarious, at time subversive Christmas picture that also gave us a blonde Zooey Deschanel.

Anchorman probably leads quotes, although Napoleon Dynamite can't be too far behind. It broke my heart not to give this to Harold and Kumar Go to White Castle, but there are far too many chuckly character moments in Shaun of the Dead that really hit on point to ignore it here.

There's a clear battle here between this and The 40-Year Old Virgin, but you need only to remember that first time you saw Wedding Crashers - it's the movie that made everyone involved a star and for damn good reason. Pre-critical mass Vince Vaughn is a spectacle to behold.

For the longest time I informally considered Clerks 2 to be 2006's funniest movie, but I think it needs to step down to Beerfest, which has held up a little better. Clerks 2 mostly boils down to poor acting and a donkey show, which also echoes throughout Borat, which is a strong contender. I once called Borat one of the best films of the decade. It may now slide into that "enjoyable" slot (jeez look at that list on that page - you should no longer be surprised by most of these musings here), and I'm not sure I've revisited it all that much since.

This and Knocked Up felt so similar - sharing a similar cast and producers and coming out pretty close to each other, both being really funny and really surprising successes. I'm leaning towards Superbad being funnier, although you can switch the titles around in this paragraph and come to no stronger a conclusion.

An unsung contender here is Forgetting Sarah Marshall, which was a little quieter upon release, and has much better character work than just about any other film here, but I've got to hand the crown to Tropic Thunder, which blew me away upon release. Damn, I forgot about Pineapple Express...wait...what was I doing here?

There's not really a debate here. I actually still think the sequel is funnier (even though it's, you know, the same movie), but The Hangover is a giant in 2009 and instantly entered that hall of immortal comedies. Hell, it even brought back Mike Tyson so he could be solving mysteries to this day.

Tough call between this and The Other Guys - the latter may be more mainstream (is it?), but when you're comparing scenes between Mark Wahlberg and Sean Combs you know you've stumbled into a weird place. I want to go with this movie because I love every second of it, I already dissed Forgetting Sarah Marshall, and I listen to Infant Sorrow constantly.

Here's another year where the two funniest films are on complete opposite ends of the spectrum. Bridesmaids holds a mean fight against The Muppets, but there's no "travel by map" in sight, so fuck that. It's tough to remember a theater experience laughing as hard as I did for The Muppets. Actually, I think I brought a flask to that one.

I think that over time, 21 Jump Street has emerged the champion of 2012, and The Campaign sort of got swept under the rug, and I trashed it after I saw it for not taking a tough enough stand. Actually read that first paragraph, oh jeez. Comment on this one, folks. Two years down the road I think it's incredibly underrated, and an especially fitting team-up of Ferrell and Galifianakis who are gods of this yearly list.

Here is where I reached Muppets-level in-theater laughter without even a flask in hand! This is still one of my all-time favourite movies that I thought hit every note perfectly while having some really interesting things to say about the public personas of film actors. The Backstreet Boys ending still leaves something to be desired, but I can deal with it for the preceding ninety minutes of hilarity.

I've talked a lot about my problems with 22 Jump Street, I in fact, JUST talked about it, but it's still the funniest movie of the year by a wide margin. Neighbors comes close, and I'm curious which of these movies we're talking about a few years from now, but for now, it's all Jump Street.

Damn, is it Thanksgiving? What are you doing reading this? Go watch Planes, Trains, and Automobiles (1987) for goodness sake!

And argue away in the comments! This is especially ripe for discussion - do you think that even my contenders should be contenders?