Write Your Own Hangover!

First, pick a city (the more sin the better) and pick someone to get married. The premise will be that Stu, Phil and Alan (played by Ed Helms, Bradley Cooper and Zach Galifianakis) are attending a bachelor party...and the movie begins... 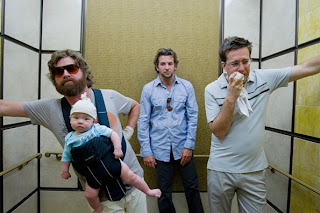 Dad loves this, so don't fuck it up

Time-Lapse City From Night to Morning:

Alan is the second to wake up

There's a critter in the bathroom

Stu has damaged his face

However the most important person from the night before is missing!

We partied all night with a feeble human who can't talk, so of course Alan makes inappropriate penis jokes

Valuable information from a cameo

Which leads us to Bryan Callen

Leaving this place we're attacked by gangsters avenging our theft

And someone is shot!

Alan admits it was his fault we blacked out

But he didn't mean to!

The Owner of the Animal we stole inflicts some damage

Tho improbable, we succeed during the second night but the next morning instead of our missing friend the gangster has someone else

This is too much, we need to call our wives. How about Phil? But wait! Stu figures it out!

Our missing friend was at the hotel the whole time!

Race to the wedding

Stu! Time to tell off somebody

We've got a special guest singer

And someone found a camera, let's look at the ridiculousness we actually had over the credits!