by Roderick Allmanson at precisely 00:24

I'm calling it - The A-Team (2010) is this Summer's first really fun movie. Enough with the maudlin, brooding neurotic heroes, failed comedies and gritty grim action. This is just a fun flick through and through. The cast is light, no one worries about plot problems or gun and SUV acquisition, and you get this impression that it was pretty fun to make. This is everything a Summer Movie is supposed to be. 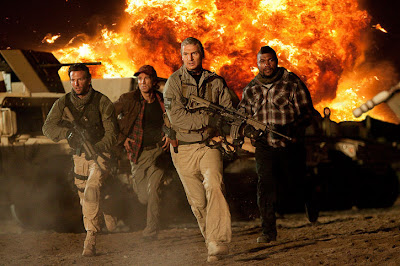 Now, let's get one important thing out of the way - I don't give a shit about the Original A-Team TV show. I never watched it, I hardly now any characters or tropes, my only real impression of it was it features Mr. T acting as himself and tons and tons of bullets that never hit anybody ever. Frankly with this as the source material I could care less if it was closely followed. This new film does just that - throws a lot of the stupider 80s elements out the window in favour of ridiculosity.

In general the best thing about this film is the cast. Each actor brings his A-Game to the A-Team and the roles fit perfectly. UFC fighter Quinton "Rampage" Jackson is of course the weak link, but works basically as Ghetto Muscle. Bradley Cooper, in between showing off abs (c'mon, there's really like two shirtless scenes, only one showing his great abs, who cares. He's no McConaughey) is starting to show more and more leading man material and works great as this scruffy playboy. Liam Neeson is in straight Taken (2009) mode, continually pissed off yet pretty cool under pressure. They've both got a lot of confidence and smugness in their own exploits until something goes really wrong.

Then there's Sharlto Copley as Murdock. This guy's awesome. How did this dude never act in anything before District 9 (2009)? He blisters through a flurry of accents perfectly (including his own native South African briefly) as well as navigating that tough balance Murdock has between genius and insanity. As the given comic relief in a pretty funny film, he shines as the nuttiest hilarious character and again, displays a good amount of confidence in what is an incredibly silly role, a 180 from the heavy intensity of Wikus van der Merwe. This dude just showed Hollywood that he's got wicked range and a lot of talent to boot.

Some of this praise, uh...this film's got a lot of problems. It's the kind of movie though when these problems are pretty easy to ignore. It's paced well enough that it never dwells on a scene long enough for audiences to think to hard about what's going on. There are actually a lot more that makes sense in this film than it lets on, it's more of a G.I. Joe: rise of Cobra (2009) than a Transformers: Revenge of the Fallen (2009), in that it makes a surprising amount of sense. In fact, I'd contend that the plot makes a lot more sense than G.I. Joe. 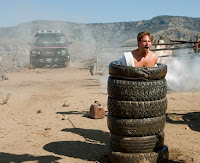 Probably the weirdest part was B.A.'s weird arc from total badass, to Peaceful Prisoon Convert back to violent warrior. Whereas his turn towards non-violence may have been interesting, it seems as though the producers instead needed their angry black guy back. A lot of the CIA characters were pretty bizarre, they basically acted like clandestine versions of Animal House (1978) villains. Their leader, known for most of the film only as Lynch, is an easy vision of what happens when kids who play too many video games grow up and become important. You can tell this guy is a Michael Bay fan. The replacement Lynch at film's end (played by John Hamm - somehow a cameo or sequel set-up?) seemed much more serious.

My strongest desire to see this film came from the Air Tank scene from the trailers, and sure enough this scene was fucking awesome beyond belief, but a lot of it was disappointingly given away by its marketing. Luckily, this is only mid-way through the film and the ending sequence is somehow far crazier. There's a thrill factor here that is lacking in a lot of other Summer films lately, something like Iron Man 2 (2010) could take a nod from The A-Team to up the ridiculous and excitement instead of pounding out bland action sequences. There's a good line here - if you're blockbuster isn't T2 good, then it might as well be Transformers-bad. The A-Team is somewhere in between (more towards Transformers) and is able to relish in its underdog, ludicrous status, employing some great action in the process.

The movie is kind of interesting in that it is actually an Origin Story, although it never exactly feels like it. It spends little time with the four dudes meeting each other, and the action always feels like a classic adventure rather than a first adventure. I suppose this is due to the 8 year, 6 month time span the film charts its course over, skipping a lot of the honing skills training sessions and montages.

I enjoyed their simultaneous showing of planning and execution, it allowed the film to flow smoothly and connect easy the intense preparation with execution. I hate to say it because I had pretty low expectations, but this is a great Summer Movie. It's not negative at all, it's got a lot of pep, humour and ferocity, never gets too deep to be that worrisome. It may not be a great film, but with sunshine and a cold beer, this is a great trip.

I love it when a film comes together.