Because it's Relevant: Biff, Incest and Back to the Future

by Roderick Allmanson at precisely 23:40
There's been this weird Back to the Future resurgence the past couple weeks. This likely originated from the 25th Anniversary of Marty's first travel through time on 26 October 1985. Universal released all three films on Blu Ray

to coincide with the date, some movie theaters across the world played re-releases of the first film, and the whole Trilogy has been on TV (You can watch the whole damn thing again next on ABC Family this Saturday from 9:30 am - 5:00 pm EST...). There's also a video game to arrive in December (with some creepy-ass renditions of Doc and Marty). Needless to say, BttF's explosion in our zeitgeist is only rivaled by McRibs, Kanye West and Late Night Talk feuds. Love this country.

So let's get to it. Now, it should go without saying that you can get into a gargantuan amount of topics of discussion concerning these three films. There are staples of culture everywhere, expert melding of soft science-fiction with constant iconography, one-liners, memorable characters and a twisting yet followable plot. Somehow this was easier to follow than Transformers: Revenge of the Swollen (2009). Although this still helps. There are time paradoxes to discuss, dozens of subtle winks and a narrative that continually reminds, refreshes and foreshadows plot elements both in grand arcs and seemingly innocuous doses. Many other websites have gone on and on about the differences between Part II and Now (a future we're quickly approaching. That guy's Doc Brown is great, by the way) and obviously Doc and Marty's gay love affair. See how much Back to the Future topics we've had the past few weeks? We need to talk about something else. So I picked the two topics that most interest me about the Trilogy: "Biff the Rapist" and "Constant Incest." Punch it!

1) Biff has all the Charm, Good Looks and Respect for Women as a Young Ben Roethlisberger

There are so many reasons why this trilogy really works, one is the multiple roles played by single actors, exhibiting different generations of the same family as well as single people in different times. Michael J. Fox really pushes this after playing 3/4 of his family (including his daughter...creepy) in Part II (1989) and his great-great-grandpa Seamus in Part III (1990). In a subtly humourous way, Chris Lloyd basically plays Doc Brown as a constant at all times. Then there's varying roles for the ladies, both Lea Thompson as Marty's Mum and Elizabeth Shue dishing different make-up as Marty's GF and wife during different decades. I think one of the most important characters and an underrated villain for the Me Decade is Biff Tannen.

Admirably played by Thomas F. Wilson, whose credits also include the dude who dated Bill's mom on Freaks and Geeks and the voice of "tough fish" on SpongeBob SquarePants, Biff is vital to the story. He's also basically a Rapist/Murderer/Gangster. I mean, in other films when the villain takes over the world there is the obligatory castle, general evil and malaise but when Biff takes over it's far more evil. He admits to killing Marty's father, abusing his mother physically and emotionally and running the town into a violent slum based around a corrupt Casino. As a kid he intended to rape Marty's mother had George McFly not intervened. He's this corrupted vision. Check out the scene when Marty follows Biff around his house right after he goes back to 1955 in Part II. He's so cruel to little children even, throwing their ball on top of a roof then laughing about it. He then proceeds to pull up Lorraine's skirt in broad daylight, then vows to marry her whether she wants to or not. He's possessive, angry and demented. No part of him contains mercy or redeeming features. He's the most evil character ever put on celluloid. Probably.

What's most dangerous about Biff is that he does possess some intelligence. While he may appear to be a simple brute, he knows how to weasel out of things, pull off crimes and invest his way to some substantial power in every future besides the end of Part I (1985). As an old man he's weary but still cunning, stealing the Time Machine for his own twisted purposes. You can see the full flex of his character over the sixty years, the youthful excess and optimism contrasted with the crotchety grandpa, but both still retain the evil spirit.

His progeny, Griff is possibly more demented. He's actually a bit more aggressive and a more active criminal, possibly due to his cyborg implants, faster-paced technological lifestyle and lack of a significant father figure (awww...). What's cool about Biff as a villain is that his presence is always felt throughout the trilogy despite his small awareness of who or when the protagonist is. He remains a threat because he's fucking nasty. I also love how the only way to up the ante after his demonic takeover in Part II was to set him in the only time more violent than that - the Wild West.

Buford "Mad Dog" Tannen is probably the most insane of all Biff's incarnations. He has no qualms or restraint in his violence, killing and robbing at will. While Part II's Alternate 1985 Biff is one with runaway money and power, Part III's Western Biff is runaway without Law (although admittedly Alt-85 has become proud enough to boast that he "...OWNS THE POLICE!" The recurring elements and continual reflection of events and characters with slightly different settings and tones is part of what makes BttF such an engaging trilogy.

The Freud theories running wild throughout Back to the Future are awesome. Marty finds himself on the way to becoming a cognizant yet unwilling Oedipus after accidentally pushing his own mother into falling for him. Nice. Lea Thompson kills it as a babe girl-next-door mom. There's more here than that though. 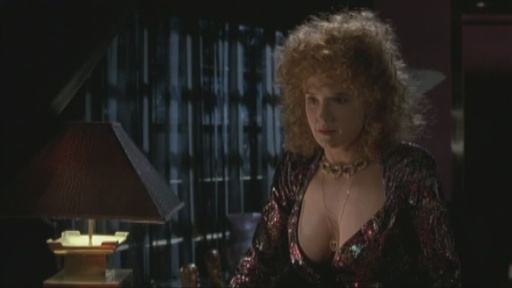 Notice in Part II when Marty sees the trashed out version of his mother Biff his eyes do not leave the boobies. They really don't. I mean, c'mon Martin, glance and then look away, he's just lost in the fun melons. They're plentiful sure but you're making them feel exposed, shamed and awkward all over. This is ridiculous.

Finally, I really need to point out that why the hell in Part III are Marty's Wild West relatives played by Michael J. Fox (Marty) and Lea Thompson (Marty's Mom). Has no one else ever realised this? Why the hell wasn't Maggie McFly played by Elizabeth Shue? You know, to show that they're a couple? I know that Crispin Glover had some troubles with the producers, and no one was giving a shit about Jeffrey Weissman so they basically just paired up the two most recognisable McFlys, but it seems like this weird Oedipal Fantasy come to life and living in the Old West. Clearly, Marty is able to watch a version of himself shack up with a version of his mother. This is sick shit. It's almost as bad as the realisation that Luke Skywalker kisses a single girl in the entire Star Wars Trilogy...HIS SISTER. Shit.

There's a whole bunch more on the internet everywhere with cool BttF stuff. I'll try to cite some here -

Part II's role as an in-between movie, contrasting to Part I and III's straight-forward narratives. It's also notable for its insane number of different timelines (four) - check that out here.

Original actor for Marty McFly, Eric Stoltz, what could have been...a much shittier film -- here.

So that's it. This post should get you thinking about one of the most thorough Trilogies of our time, which broke ground in screenwriting, effects, and blockbuster heart as well as filming styles (back-to-back), release dates and finally, providing three very connected but distinct settings that followed similar tropes and scenes with different and engaging character growth. Fantastic, ladies and gentlemen, now go buy a Blu-Ray player for this apparently okay release.

Labels: Back to the Future, Movies
Email ThisBlogThis!Share to TwitterShare to FacebookShare to Pinterest