by Roderick Allmanson at precisely 23:12
Kanye West is still on everyone's mind so today we're talking about some of his more recent albums, trials, controversies and the possibility of a deserved out of control ego. Last week I mentioned his rise as an unconventional rapper. His brand was education, class and lyrical complexity over low pants, drugs and violence. Even his lack of a stage name seemed to establish him as someone level with the public - a musician without masks or an alter-ego. He sought to re-define what it meant to be a Public Black American Figure and restore integrity to his profession's stereotypes. He's done all this while collecting Grammys, widespread commercial and critical acclaim and succeeding behind and in front of the microphone.

Holy Fuck. I don't have enough Internet to ramble about how much I love this. Every part is awesome. The Mike Myers / Kanye pairing is weird enough then Kanye just immediately goes off the teleprompter and visibly shakily voices his true opinion. This took guts, it really did, no matter your opinion of any one involved or any result, this took a lot of courage to go out and speak his mind. It's what makes this country great - you've got the freedom to be as ridiculous as you want to be and criticise who needs to be criticised.

Myer's face throughout is priceless. I love imagining whatever conversation they might have had after the producers cut to an obviously not-ready Chris Tucker. Mike: "So, you just kind of felt like going for that one, did you?" Kanye: "Yeah, you tell your kids you were there." But hey, it's a real dude voicing his opinion, skewed or not, over an incredibly serious situation that he didn't feel our government was taking seriously enough. In terms of his hubris, it's Kanye believing himself able to fight for his people, and there's not a lot wrong with that when he pulls it off. Also his follow-up interview is pleasing. 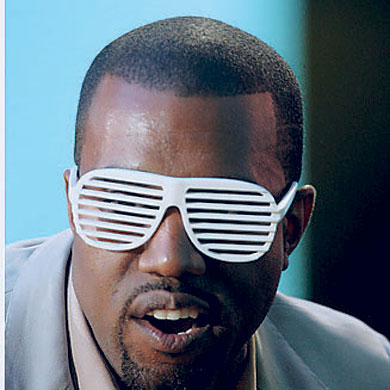 Sometime around 2008 with 808s & Heartbreak Kanye started making this transition from the "College Kid" image to this trendier, chain-wearing, Venitian-blind Glasses owning douchebag. He moved away from a relatable, artistic, possibly visionary rapper into someone well aware of his visionary status who sought to glorify himself and exploit his talent rather than be cool and let it ride. C'mon, you know you can't declare yourself cool, Kanye. That's pretty uncool. As he kept proclaiming to be the definitive voice of a generation, South Park with excellent timeliness picked up on the trend and ripped him apart in "Fishsticks" (S13;E5) This is a brilliant send-up of an out of control ego. He can't see past himself. This along with Steven Colbert's Operation: Humble Kanye a few months earlier almost seemed drastic against unarguably one of our generation's best rappers. It's not like Kanye is Bob Dylan, but maybe he was one of the best out there and he deserved to brag about himself. I mean, he wasn't hurting anyone, right?

The low PR moment of the decade for Kanye. The personal stories of this guy just get more and more ridiculous. Taylor Swift, semi-cute, surfboard bodied 19-year old Country Pop Star just won an MTV Video Music Award in 2009. Hoorah! Good for her, right? Well, apparently Kanye wasn't really pleased with the results. He found no problem with running on to the stage, denouncing the award winner standing feet away and claiming Beyonce deserved to win. At least he wasn't saying that HE should have been the winner. Wait, he actually did do that once. How does he think he can get away with this shit? His ego is so huge that he believes he can do anything, but hell, even Obama called him a jackass. You're fighting for Black Acceptance and the only Black President in history calls you out on being a Jackass? Shit, dude. Get real, baby.

There's two classy moments that came out of this - Beyonce letting Taylor come back up on stage and give a proper acceptance after the former won her own award. Secondly, Comedy Central playing four back-to-back episodes of "Fishsticks" the night before. Yeah, that episode had originally aired five months earlier. Damn that's good.

So, as the years have gone by, it's pretty clear that Kanye views himself as some kind of gift to the world. We should be so lucky to have him in our lives. This isn't much hyperbole. His Twitter Account is one of the best out there, it's a reason to get on Twitter. While he currently has 1,558,165 followers as of this writing, he's only following 1 account, Oprah. I like the idea that Kanye doesn't care about what any one else has to say on Twitter, but he's overjoyed at sharing his own thoughts. He's also a generator of the "My presence is a present kiss my ass" Meme, after lyrics from his single off My Beautiful Dark Twisted Fantasy (2010), "Monster." Which of course is the best hash tag ever. Just being around Kanye is a present to all of us, and according to him, we should be grateful. This kind of stuff...this is beyond parody or mockery. This is just a joke on its own.

Aziz Ansari sums up Kanye pretty well through discussing some moments hanging out with him. This shit is hilarious -  but there's little to doubt any more, this isn't really a joke. Kanye really is this out of control. He loves himself so so much. He truly believes without question he's the greatest artist to ever live. This attitude is just so insane, but I have to remain in contention. Kanye IS good. Kanye's shit is really good. Almost all rappers, hell, most big mainstream artists, celebrities and athletes in general think their shit is the shit, but most of their shit is just shit. Is Kanye's outrageous ego justified? Or is it just one we see more often than others? Certainly there is a discrepancy here between humility, rationality and how Kanye is expressing himself.

Stay tuned for later in the week where I'll chat about his albums and give my final case for why Kanye does not deserve to be humbled. In the meantime, enjoy this: