by Roderick Allmanson at precisely 23:38
Alright folks, it's time to talk about some Television. 2010, like other recent years, was an incredible time for TV. Amidst some of the more legendary shows coming and going we saw the continued dominance of Cable Diversification and how much critics love it, startling audience breakdowns and NBC again really relying only on Fantastic Sunday Night Football coverage to support the entire network. Well, of course that AND the Winter Olympics. 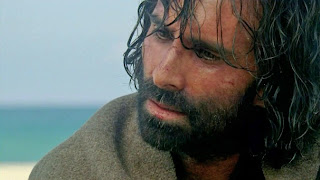 We'll break this down into a few categories because the TV season doesn't really measure up with our Calendar Year. I'll chat first about shows both in the 2009 - 2010 seasons as well as 2010 - 2011, then shows that ended in 2010 and finally shows that began in 2010. Now, naturally there's always the Mad Men and Breaking Bad and that people love, and these are some of the strongest narratives on TV, even if the former is incredibly boring and difficult to get into and the latter is so critically acclaimed that Norwegian Morning Wood really has no place supporting it here.

2010 was notable for a few big returns. Futurama arrived on Comedy Central this summer, with a good amount of sub-par episodes but some incredible, instant classics such as "The Late Philip J. Fry" (S6;E7) and "The Prisoner of Benda" (S6;E10). The Simpsons also featured one of their greatest non-Treehouse of Horror episodes in years in "The Squirt and the Whale" (S21;E19) and have had some return to form after a couple terrible years. As you can tell, I primarily watch cartoons. South Park, while surely blowing a few opportunities with their Coon arc this fall, knocked out "Medicinal Fried Chicken" (S14;E3) and "You Have 0 Friends" (S14;E4).

The best two shows on TV, though I still believe to be the one-two of Community and Parks and Recreation on NBC. Neither are audience favourites but those who watch them get hooked immediately and they've topped many end-of-year-lists like this one. I've ranted and raved about both of these plenty of times before, needless to say they're the most incredible comedies on television and their continual Emmy snub makes me want to punch babies until my arm gets sore.

So what other general news from the year? American Idol switched up its judges but no one really cared. Jersey Shore was everywhere, getting MTV ratings typically reserved for Networks. Everyone was DVR-ing and Satellite-ing and Hulu-ing, but that's not news. Olympics, World Cup, Thursday Night Football that non one was able to watch, fun sports year. Also we should note Super Bowl XLIV, which managed to attract the largest American audience of all time watching a TV at the same time. Of course, that's still a fraction of the people who logged on to Facebook at some point during the game.

Let's talk about Conan. One of the hottest topics of 2010 was the huge NBC late night host controversy, in fact it has its own Wikipedia page (look how detailed that shit is!). In the end, Conan was able to settle into a new position on TBS with a dude who was more than happy to let him go wherever he wanted, and Conan has done pretty well ever since. By the way, currently 90.6% of households with a TV also had cable in 2010, is it that big of a deal that cable shows are beating Networks? It's also nice to see that amidst all the strange Late Night feuds there's at least two pretty cool rivals who like each other. I am growing into a pretty good Craig Ferguson fan by the way, who won a Peabody this year for interviewing Desmond Tutu, is settling into a fantastic "Awkward Pause" routine and also thoroughly skews Late Night standards with his Robotic Sidekick and other frank intimate moments. He's my dude.

Anyway, besides Late Night tangents, HBO debuted three fantastic series that should all be contenders for Best of the Year, including The Pacific, Treme and Boardwalk Empire. After being very impressed with the first episode of The Walking Dead, I'm not sold on how the season turned out, settling for more typical Zombie Tropes than the unrelenting comic series. My favourite new series of the year though is still Adventure Time with Finn & Jake on Cartoon Network. Haha, that rules.I'll also mention delighting in the Sunday double-dose of Childrens Hospital and Mary Shelley's Frankenhole. Lots of new gems to find in the sand this year. Also I guarantee this the only list you'll find mentioning Frankenhole equal to Treme. Dammit, that's some funny shit.

The Boondocks tended to go out with a whimper rather than a bang, despite an awesome kickball episode. Other than that, 2010 saw the end of long-going series like Law & Order and Larry King Live (did a soul care?) The big knock-outs were Scrubs, 24 and LOST, though, the latter of which really swept up the Spring Zeitgeist. All of these shows ended for the exact reason there's not a whole lot to write about them, though. They're irrelevant, no longer interesting and really puttered out without much satisfaction. What the hell, Betty White. From appearing on Community, SNL (winning an Emmy for a...pretty shitty episode) and truly igniting the Facebook community (what the hell does that mean), Betty White was THE TV artist of 2010 and didn't even really star in any shows. What a glorious old cunt. I don't really understand my generation's love of Betty White. Sure there's the old vagina jokes, and those can be pretty fun but what other joy do we get from watching this old woman get bounced around in Snickers Commercials (on that topic can we mention the creep-out Commercial of the year? Snickerrrrsss!!). This chick and like, Jon Hamm seemed to pop up in every weird little spot. Like the Season Finale of Childrens Hospital. What the hell, Jon Hamm. Go sell some John Ham.

Community - "Modern Warfare" (S1;E23) was absolutely legendary, from the Apocalypse spoof to the lack of character shields, eruption of sexual tension and Ken Jeong's masterful final appearance, this was breathtaking.

Ugly Americans - "The Manbirds" (S1;E14) was pretty awesome. Does anyone else ever watch this show? Most of it is unremarkable, but this episode's pension for cockfighting, which I already adored here proved to be a great emotional tether for a classic sports redemption. Maybe not, but the Manbird language alone makes the episode worth watching.

The Venture Bros - "Operation P.R.O.M." (S4;E16) was a severely underlooked achievement. This scene alone may be one of the most fantastically constructed of the year and the amount of reward for the depth and growth of character this season doesn't fail to disappoint.

LOST - "Ab Aeterno" (S6;E9) took the show's most interesting and mysterious side character and developed an entire short movie about his backstory that was interesting, moving, gave some insight to the Island's Mythology (some insight). This is what LOST was like at its best - not necessarily following a strict narrative but using its episodic medium and huge cast of characters to tell little vignettes that tied into a more complete story. Despite a somewhat middling final season (although I think the Finale was spectacular), "Ab Aeterno" emerges as one of the best episodes of the year. You can take that to the bank.