by Roderick Allmanson at precisely 21:59
One of my favourite rising stars today is a dude named Adam Scott. Certainly one of the least distinctive names of any actor ever, Adam Scott has been a "That Guy" in tons of stuff. After doing some research into his career I actually found out he had been in so much stuff that I had never heard of I had doubts continuing this Profile. That's not the Norwegian Morning Wood way though, so it's time now to only look at a handful of roles this guy has used to craft a bouncing image between the Straitlaced Professional and the Eternal Slacker. Thus we present: 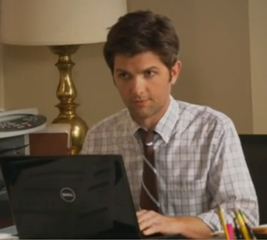 So for those of you still scratching your heads over who Adam Scott is, he's this dude from Parks and Recreation. But you may also remember him as the awkward male nurse from Knocked Up (2007). That's about the first thing I remember seeing him in, which means that's the best place to start. It's the first step towards his conquering of Mainstream Pop Culture. Well, the first step towards his existing in Marginal Pop Culture is more like it.

Adam Scott tends to inhabit a wide range of roles which makes him interesting to examine as a character actor. His lack of fame so far has allowed him to escape typecasting or settling into a comedic persona of any kind. In fact, to call him a comedian at all seems to stretch things because he rarely gives humourous performances on his own. He's usually the ultimate straight man, typically with some kind of good-natured side or sense of humour. He's the perfect puzzle piece to place around a cast of insane characters.

In his first appearance that I care about, Knocked Up, he's on screen for a tiny time as a nurse helping out Ben (Seth Rogen) and Allison (Katherine Heigl) give birth to their baby. He has this smarmy grin on his face the whole time and makes comments weirdly out of place for their situation. This is our introduction to Adam the Slacker.

Shortly after we all saw him as Derek Huff, Brennan's (Will Ferrell) younger brother in Step Brothers (2008). He's a shark, the incarnation of evil in this movie. He's the consummate professional and the laughs come from how much of an unbelievable douchebag he is. He's the closest thing Step Brothers has to a villain though he's not really openly antagonistic towards the eponymous Brothers. He's just kind of a jerk. Part of what made both Step Brothers and the Adam McKay / Ferrell companion piece, Anchorman: The Legend of Ron Burgundy (2004) work so well is their lack of a central villain. They're comedies that feature the protagonists stumbling on themselves, aware of it or not while delivering silly amounts of laughter. Adam as Derek is his sleaziest.

We can move on to what is probably the most underseen awesome Television show of all time, Party Down, which aired two seasons on Starz for some reason. Seriously, who gets Starz? Or watches Starz? It's a great show actually with an impressive cast founded by most of The State and Paul Rudd. Adam Scott is our star here, the main dude Henry Pollard who balances this line between passive protagonist and Catering Company Leader. He's sly and shy but not without confidence. He captures an ennui in Hollywood Society, exposing the hollow gasps for stardom and attention that the rest of the characters working the catering business in the show crave so desperately. It's actually an intricate character that Adam can craft - Henry is very boring on the surface but manages to be proactive in more subtle ways. He's the Slacker who knows the value of hard work but consciously avoids it. The greatest blend of the two worlds.

I didn't see Piranha (2010). I don't care. I think Adam Scott dies in the trailer. I feel like it's safe to say that he gets out of his comfort zone and emotes a bit but then dies. Fine.

Now we arrive at his fantastic portrayal of Ben Wyatt in Parks and Recreation, which concludes its third season...right now. As you're reading this. Turn of your internet and watch the damn thing. I'll wait.

Alright, nice to see you back! As you just saw, Ben is another seemingly boring character though he's written and acted so well that the boringness becomes funny instead of...well, boring. He's very straitlaced, consistently professional and seemingly uncomfortable in his own skin. As we learn more of his history though we find that as a Mayor of a small Minnesota Town at 18 years old he ran it into the ground. He has that wild side that he keeps in check, requiring a steep learning curve to warm up to people. His sexual tension with Amy Poehler as Leslie Knope has been one of the most organic relationship growths I've ever seen on television. The positive humour on this show vs. the negative, sardonic humour on shows like The Office never ceases to refresh. He has that strictly professional side but is yet able to get rowdy which comes out in small doses, making him a great character.

So what's the future of Adam Scott? Hopefully another season of Parks and Rec, beyond that we can only hope for less success so that he may continue to play integral B Characters everywhere.