The Comedic Wake of Chappelle Show

by Roderick Allmanson at precisely 20:00
Once upon a time, along time ago, Wednesday nights were epic nights for laughter on Comedy Central. A decade ago, the one-two punch of South Park and Chappelle Show at their peaks were a comedy event and not nearly as lauded as they should have been. For now, it is but a distant memory. As Workaholics and Kroll Show come on in a few minutes, more nad more my thoughts turn to the brilliance of yesteryear. How did David Chappelle find such success and cast such a long shadow? 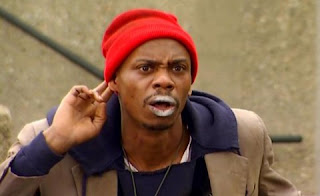 There have been a tremendous amount of shows similar to Chappelle since Dave's very public exit from the show after the second season concluded in 2004. It's similar to the wake of sitcoms that were approved in the late 80s / early 90s in wake of Roseanne and Seinfeld taking off. There's been attempts to replicate the racial comedy of minorities in work like Mind of Mencia, David Alan Grier's Chocolate News, and the recent show that's taken off somewhat better than its predecessors, Key & Peele. There has also been longtime comedians and SNL alums getting their shots and failing, such as David Spade's Showbiz Show and Norm MacDonald's Sports Show. Finally there has been a slew of other shows that have attempted to work as vehicles for other comics, including Nick Swardson's Pretend Time, Jon Benjamin Has a Van, Important Things with Demetri Martin, and The Burn with Jeff Ross.

Now, some of these shows weren't all that bad. Alright, they're all pretty bad. Only Jeff Ross is still on the air, and his brand of hyper-offensive humour has found a niche, but it won't really last. Despite the laugh they get, none of these really had the staying power of Chappelle in comedy history. That's the nagging question that's been bugging me. All of these shows would be impossible if not for Chappelle. Not only for its groundbreaking nature bringing quality sketch comedy to basic cable, but because Comedy Central has spent the past ten years attempting to catch lightning in a bottle again. Why has it eluded them?

To answer this, we need to look at Chappelle itself. Why was this one of the funniest shows of all time? I believe it is so well-liked because at its heart is a lot of goodwill. Dave had a charisma, self-awareness, and genuinely kind nature that has eluded the rest of these comics. There was a lot of naturally racist humour, but at all times it tended to laugh at itself, sometimes overtly (Such as Dave in the "Niggar Family" sketch, commenting outright, "Oh this racism is killing me inside!"). Dave had a natural ability to level with his audience, taking them aside during his monologues and identifying with them. ALL of them. A lot of racist humour fueled Chappelle but there were also these sorts of "doo doo butter" or masturbation jokes ("Granny no!"), or to go even broader, sketches like "When keeping it real goes wrong" or the slow motion sketch, that elevated the show above a one-note tone that others like Carlos Mencia have yet to achieve.

Dave really connected with the audience. His monologues were able to reassess attitudes before and after sketches, pointing out what he wanted people to get out of them, and then admitting stupidity afterwards. Entire episodes hinged on this kind of treatment, such as "Greatest Misses" (S2;E11). Such an episode could not work without both his careful but natural delivery of introductions, admitting at the same time how awful the sketches were, but also how funny they were. He continuously related to his audience and thus demonstrated his goodwill. He was one of us, he didn't look down on us, and expected us to meet him at both his high level of comedy and social critique. Through an accepting, congenial attitude, he was able to achieve this. By doing what hardly anyone else in Hollywood would ever do - walk away from a $50 million deal on basic principles, a perceived misinterpretation of his work, and a general discomfort with fame really only cemented the concept that Dave was and is a good, genuine human being.

This is the basic problem with many other comedians who attempt shows like this. You can only get away with such ridiculous things or offensive insensivity if they have that turn - the moment where you know it's a joke and the comedian isn't a total douchebag. Jeff Ross is surprisingly good at this, actually do to his remorselessness. He never indicates a need for an apology while delivering his niche brand of comedy. While watching Kroll Show, though, I realized this is really why Nick Kroll fails out there. He just comes across as such a douchebag, there's nothing positive about his humour. There's no turn where he can look at the audience and say "Yes, I'm not a huge douche," despite many chances to do so. He's just unlikeable. Nick Swardson, David Spade, and Carlos Mencia had the same problem. Others like Norm MacDonald, Jon Benjamin, and Demetri Martin are positive, likeable, funny comedians, but really just victims of wildly incorrect vehicles for their styles. Key & Peele have potential, but ultimately they will always appear as Chappelle Show lite. They aren't bold enough to take the humour and sketches as far as they need to go really make a creative mark on the medium. They also grossly miscalculate the needs of the audience, often coming up with parodies or jokes that we are supposed to relate to, but fall flat. Kroll does this, too. His parodies of things like Bravo Reality shows don't work because his audience doesn't watch enough Bravo reality shows to get the joke, and has no desire to do so any time soon. The show then seems to become less parody and more recreation. Chappelle was able to always end a parody with something really ridiculous in order to reveal the insanity of the initial subject matter. This doesn't exist in the work of the many imitators.

There was much more that made Chappelle great. Its excessively low budget led to some excessively goofy moments - among them very obvious doll stand ins for stunts (General Cornrow Wallace), terrible green screen effects ("Dee cards don lie!"), and other cheap thrills. It all made up the attitude of the show, though, and the swagger that Dave could carry on, again, made possible by a very tongue-in-cheek, self-aware line of thinking and carrying himself, made it endearing rather than a detraction. It was also boosted by the occasional cameo, whether it be from Mos Def, Jamie Foxx (Black Tony Blair), Carson Daly, John Mayer, or the RZA, it gave the show some credentials. The musical guest also added another dimension to the show. Dave's selection of sincere artists such as Kanye, Common, Black Star, and even the riff of Dead Prez's "Hip Hop" gave the show tremendous credentials both within the hip-hop loving community and as an outlet for quality rappers.

Now, there are a few shows that we have neglected to mention here that have also attempted to fill this Chappelle gap. Tosh.0 absolutely fails in showcasing its host as a genuine kind of guy, and goodwill or favor to his audience is nonexistant. It is still widely popular, but will it be remembered as fondly as Chappelle in ten years? No, because its content will be fueled by YouTube. There was also those few marvelous weeks of Secret Girlfriend, which had about three big laughs, but mostly served to completely attempt to boost the frail egos of its audience. The experimental format is applaudable, but completely unrealistic. If you forget this gem, each character addressed the camera as "YOU," who then acted on his own within the show, getting laid and being really cool all the time. It was really a classic expression of cognitive dissonance, but ultimately failed.

Lastly there's Ugly Americans and Workaholics, which have both had some success through being both hilarious and relatable. They understand audience needs and inhibit them, they don't look down on them. They're actually likeable and their intentions are genuine. They're the kind of shows that will last, also partly because they are branching out on their own (tho Ugly Americans owes as much to a show like Futurama as Workaholics owes to It's Always Sunny in Philadelphia. But that's for another post.