by Roderick Allmanson at precisely 10:13
Unfortunately for all the single people in the world, love is in the air today, but fortunately for all the hitched people, love is in the air today! Happy Valentine's Day, folks! As we celebrate Cupid rising from the grave, our thoughts turn to The Long Halloween - Norwegian Morning Wood's year-long glance at the very best holiday specials each month. In our four years of doing this crap we've exhausted most of the best TV shows, so now we're just focusing specifically on what The Simpsons has to offer us. For Love Day, that would be "I Love Lisa" (S4;E15). 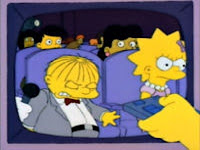 In many ways, "I Love Lisa" is a hallmark episode that established many great jokes and characters. The big one, of course, is the fact that for the first time it established Ralph as Ralph Wiggum, son of Police Chief Wiggum, supposedly because they were both "fat and dumb," according to the DVD Commentary by showrunner Al Jean. This really let the character of Ralph take off although the more classic quotes ("I bent my wookie", "These taste like Grandma", etc) would come later. Still there's gems such as "My doctor said I wouldn't have so many nosebleeds if I kept my finger outta there!" and of course, playing off Miss Hoover with lines like "The children are right to laugh at you, Ralph" when he eats his red crayon and then glues his head to his shoulder.

The real meat of this episode comes through the accidental love between poor little Ralph and Lisa Simpson. As the norm, The Simpsons really pinpoints a common awkward childhood moment - the idea that Valentine's Day really sucks for unpopular kids at all ages of life. When you're eight years old, giving paper valentines to your classmates is this weird way of saying "I like you" and if you gave or received an "I LOVE YOU" card, well my friend, that was it. You'd clearly be locked into a relationship with that classmate for the rest of your life, as was the thinking at the time. It's simultaneously a meaningless expression of liking someone, yet it feels pretty significant. It's like Facebooking or poking today - there is some very basic level of being pleased with the association of a peer, but nothing really that deeper about it, although it may be construed otherwise. It's a complex batch of emotions that The Simpsons just nails here. Lisa, out of pity, gives Ralph his lone valentine for the day (the now immortal, "I Choo-Choo-Choose You!"), and thus, despite all attempts to curtail its force, is born an Ageless Love. At least until Lisa breaks down, publicly denounces Ralph, he deals with it through his acting performance, and they settle on being friends.

There are a few great things about the timing of this episode. The appearance by President William Jeffeson Clinton may seem inconsequential but a bit anachronistic now, however it's important to that this episode premiered on February 11, 1993 while our Greatest Saxophone Playing POTUS took the Oath of Office a mere three weeks prior. Once you recall the typical 8-9 month production schedule for Simpsons episodes and this is quite the feat. 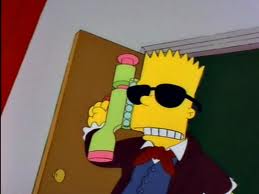 It's also nice that the episode actually rolls in a Valentine's Day special and President's Day special all in one. President's Day is an underrated February Holiday, so of course NMW hasn't counted it out before. Yet, in addition to all the Valentine's Goodness, this also captures bits on just about every President through a Springfield Elementary School play - from the Mediocre Presidents to FDR, Lincoln, Nixon, Clinton, and of course our man George Washington. We get to see the greatest reenactment of Lincoln's assassination from a Terminator-like John Wilkes Booth, played by Bart in a scene that grips the audience and Ralph's aforementioned compelling portrayal of a tortured soul George Washington, fueled by his pain and heartbreak over Lisa Simpson (Rex may still have been able to do better. Where did this kid go in future School Productions?). Some of the audience shots in this episode are incredible, from their disillusionment (also in Krusty's Special, more on that later) to the edge-of-your-seat drama in the final act. It's really a groundbreaking turn for the otherwise one-note character development of Ralph, even if it didn't last long. Take the words of a gruff Groundskeeper Willie, fresh off a Scotty impersonation while watering down Orange Drink ("I didna cry when me own father was hung for stealing a pig, I'll cry now!"). The sheer amount of jokes in that previous sentence ought to indicate how high the writers were hitting it during this episode and many more during the show's greatest run during this stretch.

There are plenty of other great moments, in particular from Homer and Skinner. The latter has one of his more public Vietnam flashbacks / freakouts (Bart - "Cool, I broke his brain!") as well as some choice lines ("...a wonderful evening of theatre and picking up after yourselves."), and a bit with Homer ("And now as our evening comes to an end-" Homer stands and interjects: "WHOO HOO!!" Skinner continues, "-with a thorough retelling of the life of George Washington!"). In general, though, the adults are just here to be goofy, provide terrible advice and intrusion into their children's lives, and take a backseat to the drama unfolding between the third-graders. Just look at Homer's theft of Flanders' diploma from Oral Roberts University. 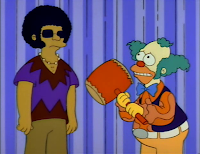 Lastly, we have one of the more epic insights into the world of Krusty the Clown and the history of his show. Apparently it's been on the air for 29 years and has ranged from a Carson-like talk show to the standard children's afternoon variety show it resembles now. It's clear that Krusty must be ancient, a great send-up of Hollywood, rampant commercialization, and the decadence of celebrity. I wouldn't mind more footage of Sideshow Raheem ("Angry. Angry young man.") and the bit about Bart owning the Krusty Home Pregnancy Test ("May cause birth defects") is terrible and awesome. An underrated moment is Wiggum's account of landing tickets to the show, which cuts to an encounter Krusy in a porno theater. The editing implies that it's just a flashback in Wiggum's mind, but Lisa indicates that he said it outloud  ("That story's not appropriate for children."). Finally, Krusty's Ayatollah joke is so dated, even for 1993, but that's part of how awful he really is. Yet he is a global star.

So turn up the "Monster Mash" and pop in this great episode to celebrate the season of Love and Presidents! Oh, to be Michelle Obama right now...