by Roderick Allmanson at precisely 08:00
It seems as if all the big franchise movie news as of late has centered around the potential of big team-up movies. The mere sliver of potential for Christian Bale's Batman to come back and interact with Hank Cavill's Superman for either a Justice League or World's Finest movie has set the Internet on crazy. There was a time, though, when these kinds of hokey team-ups were reserved for desperate crowd-pleaser films that had relatively limited audiences (hell, this kind of schtick goes back to Frankenstein Meets the Wolf Man [1943]) and terrible critical reviews. It wasn't long ago when this dubious crossover crap came in the form of Freddy vs. Jason (2003) and Alien vs. Predator (2004). So, what happened?

You don't just make a cool billion at the box office and then keep sliding by unnoticed. Marvel and Disney created this juggernaut over four years of patience, stealthily calculated hype and buzz generation, catering to fans, and making an assortment of pretty decent flicks to lead into their mega-goliath blockbuster that changed the game. 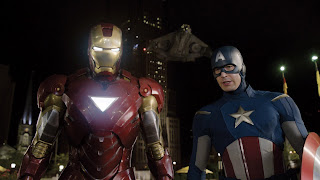 This is the golden standard, now. Studios are seeking to consolidate the handful of properties they own into cobbled-together team-up efforts. It is a bit of a shame, because since the ownership of many of the bigger hero names in comics was fragmented between studios before Marvel was able to really launch itself as a stand-alone studio, we've got all these weird assortments of characters owned by the same people. This leads to really whacked out ideas like a crossover event between the X-Men and the Fantastic Four. Yeah, what the hell? I mean, sure they're kind of involved in the same shared universe of the comics, but a X-Men / Spider-Man or X-Men / Avengers more builds on previously established relationships in the comic books.

This leads me to my next point - films are finally getting more like their comic book counterparts, because they are acknowledging the fact that they exist in the same universe. Huge crossover events have always been a staple of modern comics, but Marvel has really ramped up their slate of universe-shattering events since Civil War (followed by Secret Invasion, Dark Reign, Siege, Heroic Age, Fear Itself, AvX, Age of Ultron...shit, it keeps going, folks). Eventually the movies will be the same way, but of course they'll take a bit longer to come out. There will be all these smaller individual pictures that feed into a huge universal crossover event every couple of years.

What's important is that everyone is getting in on this. I already mentioned the bizarre Mark Millar shepherding of X-Men / Fantastic Four over at Fox, but Sony's cooking up some hot plans for Spider-Man, which could eventually culminate in a Sinister Six movie. What's notable is that unlike the cinematic Raimi Universe, in the new cinematic Amazing universe, every villain has been kept alive (just the Lizard so far, actually), and we should be getting at least three more in the next installment (Jamie Foxx's Electro, Paul Giamatti's Rhino, and Chris Cooper's Norman Osborn. If you're paying attention, you're right, none of that casting really feels right, does it?). That's a short order to come up with a few more (bring back the Sandman character from Spider-Man 3 [2007], and we're not far off at all from making The Amazing Spider-Man 3 (2016) into that Sinister Six flick. That group would be composed of the Lizard, Electro, Rhino, Green Goblin, Sandman, and whoever the hell else Marc Webb wants (all for Mysterio - or Harry Osborn as someone, who the hell cares). 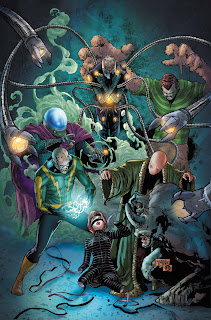 Spider-Man is interesting, because it is the only franchise that works well when so self-contained. Everything else really relies on vast teams of characters coming together to fight some huge threat. It's a credit to the character of Peter Parker himself. Or maybe I should say, Otto Octavius himself. He's a loner by nature, and has always managed to survive that way. It's also a credit to the uniqueness of his villains. Can you picture a team-up of Six Iron Man villains? They're all the same, anyway. Can you even name Six Thor villains? Spider-Man's team-up movie works inverse to the rest listed here as it would be a villain team-up against a single hero (he's that awesome). Does it make more sense now that the calibre of actors playing Spider-Man villains has been so high (half of them are Oscar Winners [Foxx and Cooper])?

So, let's come full circle back to the Justice League. All of DC is owned by Warner Brothers. That's it. There's no messy cross-ownership or tough deals for rights to work out. It's all there, ready to become the biggest, best crossover universe there is. So why the hell hasn't it become that, yet? For one, the Nolan Batman films worked so well because of their heavy insistence on realism. Of course, none of the Nolan films are really that real, anyway, and that concept has always been somewhat of a fallacy. Instead the reason why Nolan's Batman wouldn't play well with others is because it's such a self-contained story. Chris Nolan gave us the Batman from its first inception to his retirement. It sums up the entirely of the Caped Crusader's Career.

So, could it work? Of course - these are comic books we're talking about, people. No one stays dead or retired, especially not Batman. DC is more plagued by a lack of centralized vision and a lack of compatible properties. Green Lantern (2011) and The Dark Knight (2008) cannot thematically, visually, or conceptually exist in the same universe. Marvel analogues Thor (2011) and Iron Man (2008) had a bit of that same fun flavor, which was repeated in The Avengers. That's how it worked.

DC is now rushing into Justice League (2015) in order to capitalize on The Avengers, but the results ought to be messy without real guidance, not only because they'll forever be second banana. This summer's Man of Steel (2013) is pivotal for the future of well, all of DC's properties. It's also not like DC hasn't done this before - their animated universe is incredibly well-defined, articulated, diverse, and conceptually similar. They also completely kick Marvel's ass in Online Gaming. Why can't any of this translate onto the big screen? Who knows. 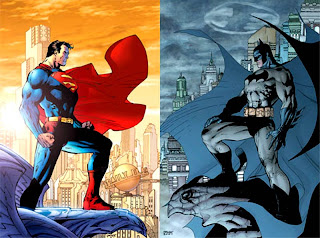 The future of blockbusters really are these huge monster mash-up films. It's also about establishing enough high-quality feeder films so that when every character is up to bat in the big mash-up it doesn't really matter that their motivations aren't clear or that their characters aren't really developed. It's a tremendous effort with a tremendous pay-off. Now, I just want to know when they're crossing over other properties, like Indiana Jones on Con Air or Darth Vader on Sherlock Holmes. If we're really into fanservice - why not just give everything to Disney and then mash it up? Keep in mind - this is possible now.

What do you think about the big crossover event movie? Is it the future of all movies? Can anyone do what Marvel did? Sound off below-