by Roderick Allmanson at precisely 11:39
Well folks, it's time once again for The Long Halloween. Once a month for the past four years we here at Norwegian Morning Wood have taken a holiday and highlighted the greatest TV specials, movies, and more to go along with it. We very quickly ran out of holidays, so we went obscure for a while, talking about such greats as Hermit Day, Puzzle Day, and Frankenstein Day. Anyway, now we're in The Simpsons Edition, where we're taking one great Simpsons episode to pair with a new holiday each month. It's March, so it's time to start boozing for St. Patty's Day and the natural episode to go along with it - "Homer vs. the Eighteenth Amendment" (S8;E18).

The episode's title is an reference to the the 18th Amendment to the United States Constitution, ratified on January 16th, 1919 that outlawed alcoholic beverages in the entire country, known as Prohibition. In the episode, the town of Springfield re-discovers a similar law after the townspeople demand it after a riotous St. Patty's Day ends with Bart imbibing beer accidentally and stumbling around drunk. The episode of course ends with the old clerk unscrolls more lines on the parchment to also re-discover that prohibition has long been repealed. They also discover a law that requires ducks to wear long pants ("Well I'll be damned, long pants!"). Naturally, Homer begins illegal bootlegging and hilarity ensues. 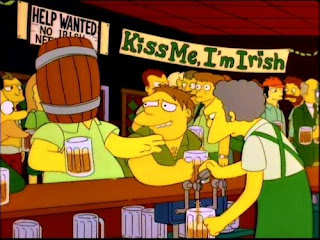 This episode truly captures many Irish stereotypes, who unlike other races of people, fully embrace both this fact and the fact that for one day a year, it's OK for everyone else to emulate their culture. Except of course for the gays and the Italians. I suppose we Irish are just too drunk to really notice or care. It's a good thing that the Irish only get a day while Blacks and Hispanics get a whole month. Can you imagine an Irish history month that celebrated traditional Irish culture for a whole 30 days? St. Patrick's Month? The drinking, fighting, crazy Irish - hospital visits and liver transplants would soar. Maybe that's why it's OK to make fun of the Irish and harp on their stereotypes - they're fairly legitimately awful, and the more they roll with the idea of drinking, fighting, and singing, the worse it gets. Even their prime minister wears a barrel on his head...

Anyway, The Simpsons nail this perspective, in the Conan O'Brien tradition, of course. Suddenly it seems Springfield is overrun with Drunken Boston Irish Boors ("This is some wicked party!" "Have you seen Sully?!"). It of course extends to a town orgy, led by Apu and Kirk Van Houten ("Everybody - everybody get naked, don't be shy, it's going to be great!" wouldn't that be worth seeing...). It's a nice touch when John Bull's Fish and Chips explodes to unanimous applause and cheering. This all ends when Bart accidentally bongs a beer, which of course means that he's the coolest kid in school as all his classmates cheer him on. That's a nice fallacy to highlight. 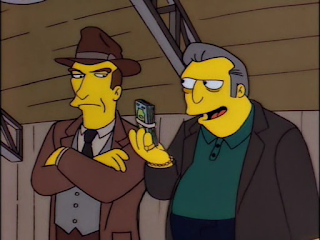 The rest of the episode effectively parodies 1920s-set pieces like The Untouchables (1987), focused around Rex Banner, voiced perfectly by Dave Thomas in a rapid-fire flapper-era delivery ("Where'd you pinch the hooch? Is some blind tiger jerking suds on the side?"). He straightens out the horribly corrupt law enforcement of the town ("Tuck in that shirt, take that badge out of your mouth!") and pits himself against the Beer Baron - Homer Simpson.

Homer steals beer from the dump and then pours it into bowling bars that traverse a series of underground pipes leading to Moe's Pet Shop - now an underground speakeasy where both the dregs and high society of Springfield meet and mingle. Pints go for $45, but they're filled with the best tasting beer in the world. During this time he stealthily evades Marge's questions ("You're livin in the past man!"), and she never gets all too suspicious, which is good to focus the story on the real meat here. As the beer at the dump runs out, Homer takes to brewing his own beer and liquor (including 12-year Scotch). He knows his customer (Bathtub Mint Julip), but as his silos start exploding ("Must have been that bean I had for dinner."), his crime wave must come to an end.

All the while, poor Wiggum, who had been ousted by Rex Banner, is destitute and living on the street ("I sold the trigger and most of the handle to feed my family."). Homer, in kindness, offers to reveal himself as the Beer Baron and give Wiggum the scoop so he may earn his job back. What's great is that at this point it clearly seems as if everyone in town knows who the Beer Baron was except for the man trying to catch him (Lenny: "They caught Homer?!"). When Homer is supposed to be sentenced to death by catapult (one of the more insane death penalties), Wiggum slyly sends Rex Banner "back to momma" and just when Homer is set for his turn, the Old Clerk Guy discovers that, hey, that was fun, but really, the Prohibition law has been repealed for 199 years. Whoopsie-doodle. 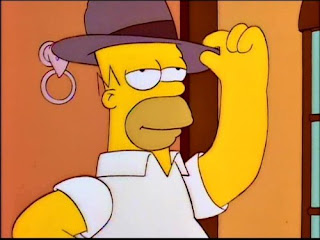 There's many more great tidbits here. After Homer hits a gravestone and Bart says it's bad luck, there's a great little touch where the headlight is broken in the next scene. It's also always fun to see those underwritten alcoholics of Springfield, like Hibbert's wife, who has a similar reaction to Homer, Moe, and Barney when Prohibition is revealed. She was also one of the townsfolk taken in for drunk driving in "Duffless" (S4;E16). Then there's Wiggum's astute observation that every astronaut and baseball player has been either drunk or on cocaine, which of course means that we need to do like our heroes and honor them by making terrible personal life choices. Finally, our brief glimpse of the CEO of Duff and the introduction of Duff Zero leads to what we all know - no one drinks beer for its robust taste ("Well...that's the end of me.").

So there you go. This is a great episode, full of really racist Irish Stereotypes, but we're really too drunk to care. It's also a keen examination of both a historical event (this whole episode really could be set in the 20s...) and the cultural addiction to alcohol. St. Patty's Day is really all about drinking and fighting in the true spirit of the Irish - go out an have a brew!