The Linguistics of Workaholics: The Eternal Search for Catchphrase-worthy Colloquialisms in Modern Television

by Roderick Allmanson at precisely 17:44
The throes of late night comedy cable viewing is pretty rough. I've posted a lot about the kinds of perverse shows networks like Comedy Central air past the 10:00 pm hour, from Chappelle Show to Secret Girlfriend, mostly because I do follow many of those kinds of programs pretty loyally. I am smack dab in the middle of the demographic of these kinds of stupid shows and it's always interesting to see what the network thinks I want. They get it wrong all the time.

This hasn't happened, mostly, with Workaholics, now in its third season (cable seasons are so wacky, this season technically started last May, and will go until this March, spanning twenty episodes).The show centers around three slackers from Rancho Cucamonga as they work their braindead telemarketing job as well as get into all sorts of silly hijinks. One thing that separates the show from most though, is its progressively increasing desire for brand sponsorship as well as what is starting to become an insane attempt to jump-start catchphrases. 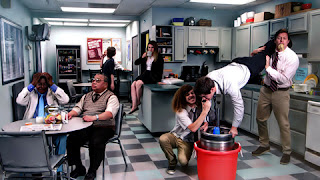 There are many products featured in Workaholics, as well as an insane attempt to put these guys in tons of promos and other related commercials. The largest plug this season was for Dr. Pepper 10, which in its own way is this weird blatant sexist-and-proud-of-it-sort of drink that exists for no reason at all. It makes sense for the characters in the show to be drinking this stuff, they're exactly the kind of rubes who would connect their own feelings of masculinity to the marketing efforts of a soft drink. That's what I took from its repeated use in "A TelAmerican Horror Story" (S3;E12) where it eventually saves one of the possessed Workaholics from a fictional demon ghost (and by fictional, I mean, also within the show he doesn't actually exist). While the show's writers have confirmed this (sort of, they may genuinely be the sort of rubes I was talking about earlier), others disagree, and with just cause - these people are the Peyton Mannings of live action late night night scripted programming. They'll hock anything.

This goes from member Blake Anderson apparently making his own Doritos commercial, to an entire web series promoting Klondike's Choco Tacos. From the looks of it, I can believe that not all of this is really funded by the big corporations, rather it seems that the show's creators willingly just love a few products and want to show them off to the world. Has consumerism hit our culture that deep - where our productions center around characters eating Doritos and name dropping cars like Anders Holm's Honda Civic. It's bizarre, but I suppose that's where we are.

This brings me to the source of this article. All this name dropping seemed to once go hand in hand with this strangely well developed Workaholics lexicon. Truly, it almost rivals Jersey Shore in its use and complexity. However, after binging on a few episodes, and especially when watching live, I noticed something strange. Sticking with the Jersey Shore example, we were all introduced to "GTL", "Grenades", and "Smoosh" all at once as part of their insular culture, and this kind of vocabulary was repeated throughout the show. 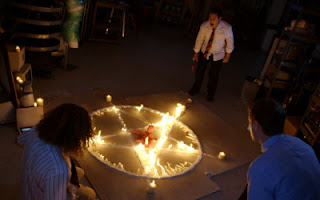 In Workaholics, however, concepts such as "Tight Butthole" and "shib" in place of "shit" were all staples of Season 1 and they were naturally popular in their own right. As we've moved on, though, each episode attempts to use a hashtag to boil down a concept, or even just a joke into a single word or phrase. Hashtags will often appear on screen just after a funny joke or scene and right before commercial, obviously prompting viewers to go online, tweet, and drum up interest in real time.

It's a fairly brilliant idea from a marketing and digital integration standpoint, but it detracts from both the once carefully constructed and original lexicon as well as the ability of the show to generate organic catchphrases. Everything is now desperately leaping up and down for attention but less is really sticking. This entire season has been fueled by #getweird, but others include #freekarl, #crankzone, and #lording. As they openly admit, these phrases turned into hashtags are mostly thought of by network and marketing folk.

It's really all part of the new digital age. Viral is seen as an immensely powerful tool and everyone is trying to harness it. This basic line of thinking is retarded. No one could predict that this random ass video would lead to the worldwide Harlem Shake phenomenon, and listen, you ain't doing shit with the Harlem Shake, anyway (because everybody loves the Miami Heat...). It is a fallacy to try to actively jump start Internet trends like this. While digital engagement may increase during viewings of Workaholics, is there any real substantial lasting impact? Who knows, but the only hashtag I could remember off the top of my head was #lording, and that's because that was the moment I noticed something weird was going on with these catch phrases that were oft-repeated for a single episode, hashtagged, and then dropped from the lexicon. 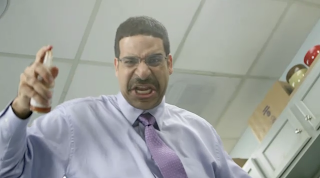 Let's take an example from yesteryear to illustrate how these current attempts at instilling a colloquialism into the common language is more ephemeral when faked in the age of digital technology. If I mentioned the phrases "yada yada", "shrinkage", and "master of your domain" I am sure that you'd know exactly what I'm talking about. For those of you still in High School, google all three.

Seinfeld did what Workaholics is trying to do in an age without computers. It's true that part of the heavy investment in the show came from integrating very simple yet unique linguistic concepts into the contemporary lexicon. Seinfeld's colloquialisms, however, have persisted to this day. Now, there are several extremely large differences to consider:

1) Workaholics is not as large as Seinfeld. Nothing is. No other show still gets prime access syndication a decade and a half after its cancellation (or has an as engaged a social media presence, including a regularly updated Facebook and innovative Twitter handle for that matter).

2) Seinfeld dominated its broadcast network ratings, which could still be counted on to be higher than cable. This caused a heavy cultural divot and is impossible to repeat today with fragmented viewership (due to the cable television, carnivals, water parks...) and a growing multitude of screens upon which to view content.

So what are we left with here? How does Workaholics' heavy reliance on brand hocking as well as its desperate integration of digital trends impact the actual following, enjoyment, and longevity of the show? Who knows. It's certainly popular, although it has become more hollow and less credible with its advanced acceptance of commercialization.