The Funky Conglomeration of Culture and Icons in Spring Breakers

by Roderick Allmanson at precisely 17:37
Today marks the expanded premiere of the latest film helmed by Harmony Korine, Spring Breakers (2013). You may recognize Korine's name from such delightful romps as Gummo (1997), and Trash Humpers (2009). Or if I just say he's the dude that wrote Kids (1995), you'll probably have some idea of his propensity towards unpealing veneers of good taste in order to elucidate a more truthful depiction of youthful struggle, namely the conflict between naïveté and an undeserved, forced maturity, and the disillusionment that often comes from achieving the latter. This usually brings a ton of controversy to ol' Harmony.

So into this pot let's stir three young starlets, rapper Gucci Mane, James Franco thoughtfully following up Oz the Great and Powerful (2013), and a ton of real-life wackiness filmed in St. Petersburg, Florida, and you've got one of the crazier movies to hit theaters in a while. Seriously, St. Petersburgh is on the Gulf Side - no one likes the Gulf Side. 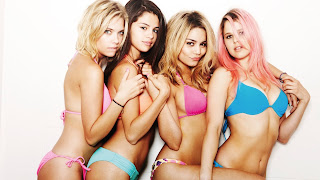 So let's first talk about these four young women who star bikini-clad front and center. At the height of it all is Selena Gomez (20), previously known for the Disney Channel show, Wizards of Waverly Place, her band, Selena Gomez & the Scene, and for dumping Justin Bieber. Her face is on prepubescent lunchboxes everywhere. Selena plays Faith, the quiet voice of reason throughout this flick. Of course she is.

Next we have Ashley Benson (23), otherwise known as the hottest one, primarily known for the excessive trashy ABC Family show, Pretty Little Liars. In Spring Breakers she sluts it up to play Brit, a cunt, in as many words. Joining her is Vanessa Hudgens (24) as Candy. Even the names are stripper names in this thing. Hudgens secured her teen idol cred through the High School Musical movies, but has already cut her teeth on more sexualized adult fare like Sucker Punch (2011), and the upcoming Machete Kills (2013). Speaking of Sucker Punch, I suggested during its premeire that it would become the Greatest Jailbait Movie Ever. If only I could have seen Spring Breakers coming...

Lastly we have Rachel Korine (26) as Cotty. She hasn't really been in anything but Harmony Korine movies - she's his wife. What makes Harmony's film great is that this is a total wishlist for Pop Starlets. It's the Disney Channel version of The Expendables (2010). It's got every young hot actress with millions of followers (16.9 million combined on twitter - 14.5 of which belong to Selena) all in one movie together, wreaking havoc! Of course, all of their Twitter pages also have advertisements for Spring Breakers and plenty of gratuitously tantalizing bikini shots.

So, the big question through all of this, is what happens to Selena's kid followers when they're exposed to this stuff? There's a blurry line between allowing actresses to branch out and do whatever they want, which is pretty fair, and the legitimate fact that most of the fans of these girls are way too young to handle the insanity of a flick like Spring Breakers, but that's what they're exposed to from following the girls. It's a legitimate point between social expectation and individual freedom that has been raised this week from sources such as philosophy professor Evan Selinger of the Rochester Institute of Technology.

On that note, it's also worth examining what this does to the brands of both the girls and their respective kiddie franchises. Can we look at High School Musical the same after Vanessa parades in a drunken drug-fueled daze in Spring Breakers? Can we accept Selena's recent return to Wizards for a special episode? Sure. My guess is that a couple of twenty-something girls with bright futures in Hollywood aren't really worried about it. There are new sexy markets to conquer, after all. 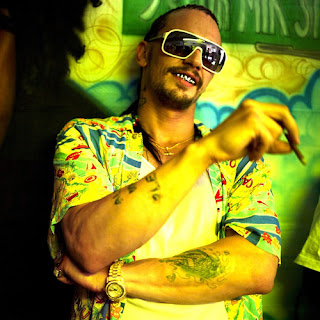 I for one, think this concept is awesome. It's dark and dangerous and weird. Real weird. Nothing ever really goes away on the Internet. Once harmless Selena Gomez image searches now bring up some great sexy pics to disturb all of her loyal fans, but there's something very freeing in that. What's also freeing is the fact that most of Spring Breakers is straight-up real. Ashley Benson claimed that the only actors in the film were the four girls, James Franco, and Gucci Mane. Harmony Korine and crew took the little starlets around St. Petersburg and just filmed them mingling in the shadiest corners of the Spring Break Mecca. It's spectacular.

There's a lot more to this movie. I haven't even mentioned much of James Franco, I mean, there's Oscar buzz around this guy. Between this and Oz, he's having one hell of a month! His spring will likely be only overshadowed by The Rock, who will put out four films in four months (Snitch, G.I. Joe: Retaliation, Pain & Gain, Fast & Furious 6). That and the omnipresence of Britney Spears music leaves an even deeper reading of the film.

At any rate, this is a nutso combination of bits and pieces of Disney culture spun and blended with the wickedness of a spring break gone to hell. The fact that the contemporary tabloid journalism that follows the likes of Ashley and Selena don't seem to realise that and continue their marketing of the film towards the same demographic just makes it all the more awesome. Props to Harmony for turning a lot of our pop culture on its head and twisting around the careers of just about everyone involved. There may not be a film with more inspired casting this year.

What do you think of Selena and her scene here? Sound off below-