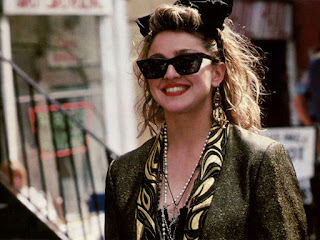 Why Did I Watch This?
I had to think really hard about how this got on to my list, but then towards the end of the movie I remembered. There is a split second cameo from the three identical strangers! I had watched that documentary on Hulu, I think after just scrolling around and because it looked interesting. But they mentioned that these triplets who were separated at birth and adopted by different families made a cameo in Desperately Seeking Susan for some reason. I then looked up the film because it's one of those films with a catchy title and one that sounds familiar that I had never seen. The plot seemed bonkers so I threw it on my list.
What did I know ahead of time?
Not all that much. I knew Madonna was in it and it was a big deal at the time but not much cultural weight since then. Also, I had forgotten this, but I guess I did know that the triplets were in it
How was it?
I really enjoyed this one. It is possibly the most 80s movie of all time. It seriously looks like a film that was made in the current day that exaggerates the 1980s. It's like straight up Hot Tub Time Machine (1980) or Take Me Home Tonight (2011). Madonna in particular really just plays Madonna, with blown out hair, fingerless gloves, leather jackets, rhinestone boots, and tons of unnecessary dangly jewelry. Patricia Arquette plays the most bored housewife ever, with hints of severe depression who gets amnesia and then wakes up thinking she's Madonna's character. It is a true screwball comedy of multiple mistaken identities and amnesia.
It's not all thaaat funny, but had a few laugh out loud moments. The dramatic elements are much stronger and for as big of a presence that she has, Madonna isn't actually in the movie all that much. It's more Arquette and Aidan Quinn who are roped into this escapade. There is hints of mob hits and stolen Egyptian jewelry, but all this is pushed so far aside to focus on the characters. At one point Arquette becomes a Magician's assistant - it really is bonkers trying to describe it.
More than anything though, this film was just so different from anything you'd see today. It really felt different than most films you'd even see in the 1980s, despite being so damn 80s (at one point a woman appears unironically wearing a slim tie, a huge shoulder-padded jacket and sunglasses). There is this strong undercurrent of male domination and mistreatment of bored wives, who should know their place. It felt like a companion piece to Thelma & Louise (1990) honestly, where these women are trying to strike out on their own and labeled as degenerate lesbians as a result. It was written and directed by women, Leora Barish and Susan Seidelman respectively, although this is probably the most famous that either of them have done. I wonder what voice they might have added if they existed in a better climate for female moviemakers.
This was really fun, engaging, and frollicking. It could have used more jokes if it was going to be a straight comedy, but where it is worked well for what it was trying to do. At one point Madonna puts a Madonna song on the juke box and sings and dances along to it, which is one of the most meta moves ever. I recommend!
Follow the other 52 for '22

Labels: 52 in '22, Movies
Email ThisBlogThis!Share to TwitterShare to FacebookShare to Pinterest