Profiles: The Contrasting Roles of Will Ferrell, Part II

by Roderick Allmanson at precisely 11:07
Welcome, ladies and gentlemen finally to Part II of our look at the many varied roles of Will Ferrell in honour of his new film, The Other Guys (2010). A Dozen Days ago I described some of his different types of characters, the great job he does in Supporting Roles, Buddy Films, Children's Films and even (relatively) serious work. There are Four Characters that are pretty significant however, his straight-up Leading Man-Child Roles. These Four all have their own particular nuances and idiosyncrasies that serves to make each distinct facets of that singular Man-Child Theme. We'll begin with the weakest character from the weakest film and move from there:

Jackie Moon in Semi-Pro: Everybody Love Everybody Besides some of the Best Marketing a Will Ferrell Film has had of late, Semi-Pro (2008) was a critical and commerical bomb. I found it a spectacular look at Beta Males in B-Level Athletics (not unlike The Other Guys' eponymous look at those other guys). It's an interesting film because Jackie Moon really takes the backseat to some of the other characters. He doesn't get the girl, he doesn't have the most satisfying arc and he doesn't really have the talent to carry or coach the Flint Tropics (Best Fake Sports Team Ever). He works as a rallying point, though. Jackie is able to bring out the best in everyone around him, bind the teammates together and encourage and support them. He's definitely the most sensitive Ferrell creation, as well. He's got a soft spot for his dead mum (so much so that he forfeits a game when she's insulted) as well as for team love, loyalty and friendship.

All of Will's characters have trouble growing up. Jackie Moon most clearly has issues with his madre, but is also stuck in a changing world. He fears the changing merger between ABA and NBA threatening to destroy the precious if not precarious small-town set-up he's established. He's also clutching on to former glory, deluded by a to fear of growing old and irrelevant (despite the clear fact that he is old and irrelevant). In the end one of the most grounded supporting casts in a Will Ferrell Film Ever bow to his incredible promotional skills which he more than sheepishly employs to save the day. Like I said, this character is by far the most passive, sensitive Man-Child, expressing his fears through moodiness and despondence rather than insane yelling. For the most part.

Chazz Michael Michaels in Blades of Glory: He'll Get Inside You Face 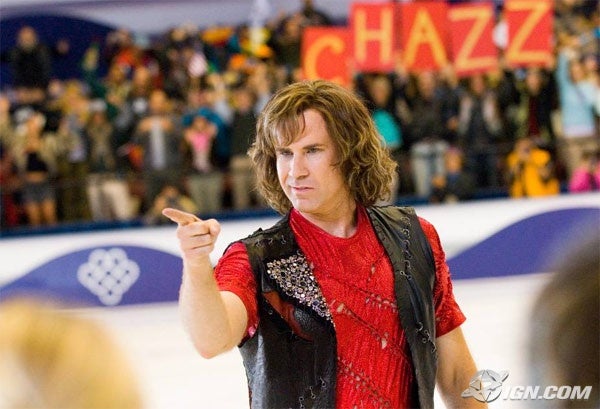 The most brash and renegade Will Ferrell Character, Chazz Michael Michaels IS figure skating. Blades of Glory (2007) is a monster on its own, existing someplace goofier than Semi-Pro but not nearly as ridiculous as Anchorman: The Legend of Ron Burgundy (2004). Chazz is a addicted to alcohol, sex, fame and glory - refusing to quit when he gets going. One of my favourite Ferrell creations actually, Chazz is loud, confident and unlike any of Will's other creations, a literal Lone Wolf. He is loath to reach out to any kind of friendship, part of which results in his great difficulty working with Napoleon Dynamite.

He's actually one of the least Man-Child like of all of Will's Man-Children. He doesn't care enough to run away from problems or deny any big life tragedy or abandonment issues. He's alone, uncaring and unfeeling until Jimmy McElroy gets forced into his life thus giving him one vital attachment. Like Jackie Moon he is without a Love Interest (unless you count like...Oksana Baiul) but the film works better from it. Jackie has enough to do controlling everybody in Semi-Pro without having a chick to pursue, and Chazz's personality is so anti-commitment that no lasting relationship would seem real. Chazz is nuts, look at this brilliance. He's the peak of self-destruction. Ron Burgundy approached this level towards his darkest point in Anchorman, but hell, this might as well have been Chazz's introduction. He gets worse from there. Again, Blades of Glory is its own monster. 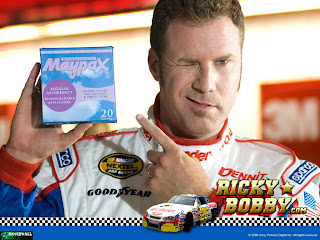 This is one of Will's Career Best Characters. He's got the most significant Arc of any film he's ever done (except maybe Stranger Than Fiction [2006]). Ricky Bobby is that perfect mix of crazy, confident and vulnerable. There's a lot of pain that drives him which inspires him to drive fast. What's cool about Talladega Nights is that you can tell there's this real character underneath this insane one. The NASCAR circuit brings out this brash, boastful American out of his small-town, meek guy. By Film's end he finally reaches a middle path. He stops racing for the love of his dead-beat Father, his bitchy wife or even his Gay French Rival. He races for himself. That's the key with Ricky Bobby. His Man-Child grows up by realising he needs to drop his issues with the people around him and becomes a man on his own right.

This could also rank in the Buddy Film Category, but due to the long split he has with John C. Reilly and the more solo focus the second half of the film contains, it becomes Will's Movie more than any other. He is loud and obnoxious like Chazz Michael Michaels, but lacks the self-destructive habits and has a strong outer and inner need for accompaniment rather than a small internal desire. Abandonment, rivalry, fake vs. real friendships and marriages set in the greatest Advertising World there is, Talladega Nights (2006) is a film-making feat of strength. Also Ricky bangs Amy Adams in a bar. Righteous, brother.

Ron Burgundy in Anchorman: The Legend of Ron Burgundy: In a Glass Case of Emotion

Ron Burgundy is the balls. I've already discussed at length the various Insane Competing Realities of Anchorman (2004), it's a shame that he really hasn't built a film as purely surreal as this since. Any McKay film (Talladega and The Other Guys) comes close, but none really so thoroughly skew reality as Anchorman. Maybe it's simply the 1970s setting that lends a certain liberty to be ridiculous (compare with Starsky and Hutch [2004] and Semi-Pro which both existed in much firmer realities, the latter of which was downright gritty at times). While Jackie Moon doesn't have a great deal of aggressive actions, Chazz Michael Michaels is a reluctant player and Ricky Bobby's struggle is to liberate himself from his need for company and approval, Ron Burgundy is the definitive center of Anchorman. There's no question.

He gets the girl - babe of babes Christina Applegate. He gets his friends back after a disastrous fall from Olympus. He's not a fighter by choice, nor is he explicitly loud or uncouth. He's the perfect gentleman. Picture for instance what would happen if Ron, Ricky, Chazz and Jackie were in a bar together. Jazz Flute comes on the Jukebox. There's only one man who could get a lay out of that, much less make it out without his ears bleeding. Ron would take charge even among Will's own Character Parade. He's a perfect rallying point, a natural figure to look to when in a jam. The supporting cast is absolutely out of control here but Ron always remains cool. He's the smoothest of the characters that appear here, probably the most well-rounded.

He also doesn't have that many psychological issues, which undoubtedly help found his leadership ability and calm demeanor. Ron is still afraid of change, however, and when Veronica Corningstone threatens to destroy the world he's built things go downhill. Anchorman is about Fall and Redemption, the destruction of a Faulty World and the Ascension of one built on Compromise and Tolerance. There is of course, a whole lot of goofiness here that prevents any deep analysis (like that's ever stopped me before). Ron breaks down only when his entire world is destroyed, not dissimilar to how Ricky Bobby's World was Ruined. How both characters react are a sure sign of their distinction. Ricky, starting from the bottom returns only to the bottom with a family and sons intact, thus he freaks out much less. Ron, however, only knew the top. When he goes to the bottom he doesn't really know how to react other than drinking warm milk on a Hot Hot San Diego Day.

So whenever anyone tells you that Will Ferrell plays the same character in every movie he's in, you look him or her in the eye and scream at the top of your lungs "NO" and then show them this website.

Come on, Magic Man, what are you waiting for.